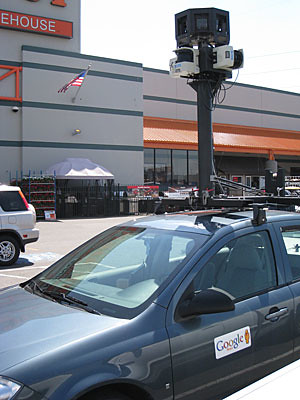 OK, so I’m a total web geek, but I have to confess that my heart went aflutter when I spotted the Google “Street View” car pulling into the Home Depot parking lot yesterday in Downtown Seattle.

For those not in the know, Street View is a feature built into Google Maps and Google Earth that provides 360 degree panoramic street-level views of various cities across the country. Since its launch in May of 2007, the feature has taken the world of web geekdom by storm, spawning fansites, privacy concerns and something of an inferiority complex among some Seattlites.

See, although the service launched with just five cities, Google has since added more than 50 additional locations… none of them Seattle. With much smaller cities like Juneau, Alaska (population 30,000) getting the Street View treatment ahead of a tech center like Seattle, it was beginning to look like an April Fools joke come true.

Happily, it looks like the Emerald City is finally getting its due. While snapping these photos of the car yesterday, I asked the driver (who seemed unfazed by my stalkerazzi pose) “so does this mean Seattle is finally getting Street View?” Yes, he confirmed.

And though he couldn’t say when the Seattle Street View pics might go online, he did say that he’d sent in his first CD of photos last week, and that Google had him photographing “the entire grid,” including our very own Capitol Hill. 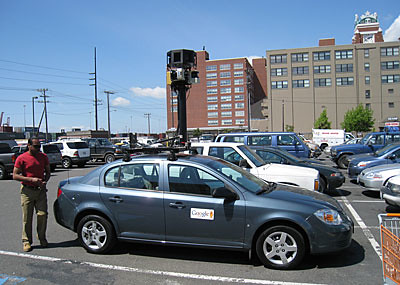 It’s no cover of the Capitol Hill Times, but I’ll take it. :)

Or, at least, I’m being filmed for TV right now. The light is kind of bright and they want me to type. I love TV.

Now we’re trying another angle. Do you like our mural? We didn’t have it painted — it came with the house.

Now I’m typing. I’m quite a typist and i’m glad I cut my nails.

Tv is great. I tell you. I should interview them.

should be on the boob tube channel 5 tonight. be there.

We saw an earthmine truck along Aloha both Friday afternoon and this morning. Anyone know the deal on that?

In Burien, of all places. But I guess they’re being thorough.

🗣️ Let’s talk about the neighborhood