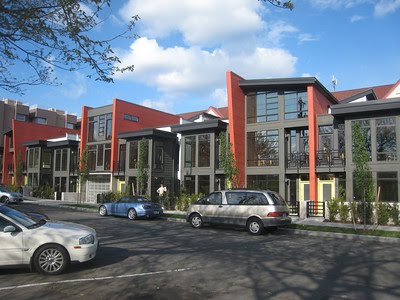 With the Brix auction taking place last weekend, neighbor Bill asked us to look into another notable Capitol Hill real estate development – 25 on the Park – that is struggling with the down economy. Urbnlivn reported on some of the development’s problems back in summer. We’ve dug in to learn a bit more about these empty homes that seem to be stuck in limbo on the edge of Cal Anderson Park.

b. Failure to pay when due the following amounts which are now in arrears:

Charges for monthly payments not made within ten days of its due date $29,450.61

Though the notice anticipates an auction in June 2009 and there was an auction scheduled for August 2009, no auctions have apparently taken place.  From City Bank’s comments after its most recent earnings release, they may be attempting to find someone to finish the build out on the units to sell them:

“We are prudently financing the construction of homes in housing developments where sales are actively occurring,”  [CEO Conrad] Hanson said. “We are not planning on selling building lots where the appraised value is significantly below the value of the land with a completed house.”

CHS contacted City Bank for an update on the status of the development and will add any new information to this post if we hear back from them. 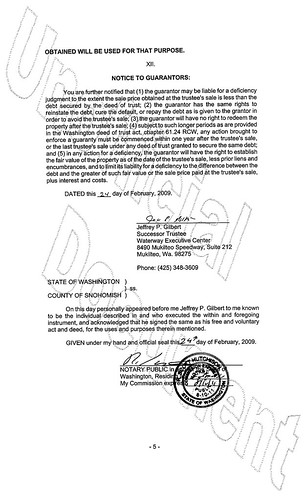 NYTimes has nothing on CHS…
City Bank is definitely not responsive to general inquiries on this property.
Looks like they will sit empty over the winter. Surprising given the pending Light Rail construction which isn’t likely to add value in the short term. I for one would like the opportunity to finish out one of those units, and there are probably plenty of others.

That unit is from a different project. That’s the 1100 E Howell project.

…and i’m pretty sure they had sold some of the back units. it used to be open (unchained). they must have refunded the $$ and sent them packing.

City Bank should take note of what happened with Brix. An organized marketing effort can work to unload a bunch of property and save a developer (or banks) ass. Are there many developers large enough, flush enough, or interested enough to buy the whole project? We will see…

this is a little different since they aren’t finished units like the Brix were…part of the problem is that these units aren’t finished inside, which i am sure makes them more difficult to sell. if they are looking for a builder to finish them they might be looking a long time for someone to take on the risk of whatever the dwelling co. may have messed up in their construction…

Nobody wants to live in crappy looking over priced town houses….shocker.

I live on the same block as Twenty Five on the Park, and I wouldn’t touch one of these places with a 10 foot pole. The unfinished units facing the park were never outfitted with deadbolt locks, so an open hole has remained in the front door. When it’s cold and wet – the units steam up from the inside. I can just imagine what shape the framing is in and wouldn’t be surprised if these units suffered from mold issues in the future.
It really is a shame this project went down the way it did; the complex is ugly and the units are completely overpriced, many of the plants on the site are dead or dying (what a waste of money), there has been graffiti, dumping/litter, and yet there it sits; nothing happens. What a complete waste.

[Picturing paper over the windows, one circuit of working electricity, and the bank or community paying for a ‘dorm supervisor’ type to check in once a day… ]

Don’t suppose there’s some way to unofficially sanction homeless use of these molding/rotting homes as impromtu winter shelter? Especially considering all the recent closures/cutbacks in our ‘most livable’ fair city….?

I mean, if there’s no owners anywhere on site…