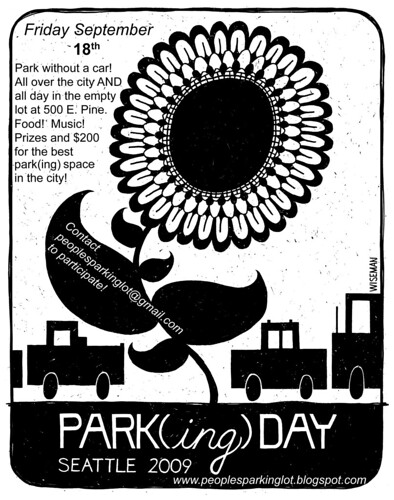 On Friday, September 18th, people all across the nation will take to the streets to turn car spaces into people spaces. In Seattle, Feet First is leading the charge by making it relatively cheap and easy to get street use and meter permits.  On Capitol Hill, People’s Parking Lot (a.k.a. the Keith Harris Conspiracy) and the Capitol Hill Community Council have stepped up to make Park(ing) Day 2009 even better.

On that Friday, the vacant lot on 500 E Pine will truly be a people’s parking lot – Keith Harris’ ingenious plan is to recruit neighborhood groups and businesses to host individual parks in the space. Over a dozen names are already on the list, including SVR Design, WorldChanging Seattle, and co-working space Office Nomads. Alongside the many and varied amusements supplied by the individual parks, a schedule of events is being planned for the entire lot as well.

The crown jewel of the day’s events on 500 Pine will undoubtedly be the awards ceremony for the first ever Park(ing) Day Seattle Prize, hosted by People’s Parking Lot and the Capitol Hill Community Council.  A group of local journalists (including CHS!), unemployed artists, and other disreputable neighborhood-types will be recruited to the judging caravan, which will wind its way throughout Seattle in search of the finest park to grace a parking spot. The winner will receive a super-secret fabulous trophy and an equally fabulous prize.

Are you tempted by the visions of mini-parks you have dancing in your head?  Do you too wish to be in the running for the fabulous trophy and equally fabulous prize?  If so, please contact Keith at peoplesparkinglot(at)gmail.com if you want to join Park(ing) Day Central Park. Park(ing) Day Central Park isn’t terribly picky about deadlines, but would like everyone to sign up as soon as possible. You can find registration forms here.

After being happy resident of Seattle for six years, Comrade Bunny started blogging about it. That is so Capitol Hill. For more geek/green/Seattle, see Life on the Hill and Other Stories