I’m sure I don’t have to tell you, but we are lucky enough to live in one of the most incredible neighborhoods in Seattle. It is a place where creative new buildings, such as Capitol Hill Housing’s award winning Broadway Crossing and ‘starchitect’ Tom Kundig’s 1111 E. Pike intermingle with pieces of history such as the Oddfellows Building, Holy Names Academy, and even Seattle’s oldest standing home. It is a place where innovative businesses such as  iLike  and Cafe Vita make waves on the national scene, and where global chains are replaced by local Mexican eateries. Jimi Hendrix is memorialized here, Bruce Lee was buried here, and President Obama even lived up here as a baby. Oh, did I mention we are also the densest part of Seattle, if not the entire Pacific Northwest (Canada excluded)?

Unlike the rather empty tracts of land along MLK, the Sound Transit Link Light Rail Station currently under construction on Capitol Hill will be at the heart of one of the most culturally, artistically, historically, and culinarily rich areas in all of the Puget Sound region. Also unlike ST’s past projects, they decided to actually purchase the land above the station and they have asked us, the community for input on what to do with it.

The four hour design charrette this Saturday, paid for and hosted by the Capitol Hill Chamber of Commerce and the TOD Stakeholders Group, is a chance for everyone in the community to open their minds and envision the most grandiose possibilities for the 3 acres of asphalt along Broadway. Not only is it a chance to share ideas and listen to others but sketch artists will be on hand to help people actually try and conceptualize what some of these possibilities will look like. At the end of the year the results of this design charrette will be presented to Sound Transit, who will presumably use the ideas generated here to decide what to build in the future. 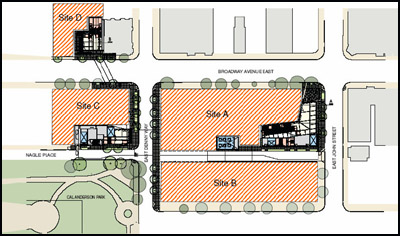 Want to see an extension of Cal Anderson park that meanders into a public plaza for the Broadway Farmer’s Market? Maybe you dream of a wonderful community center with views of downtown and Mt. Rainer? Perhaps you envision a beautiful icon, visible from all over Seattle, with the architectural integrity to be placed next to the Space Needle and the Central Library on Seattle postcards? Well this is your chance to share such ideas and actually have them incorporated into reality.

Earlier this week the Capitol Hill Community Council’s Planning and Policy Committee met to discuss the Broadway TOD*. The most common thread among us was the desire to have the development on this site stand for hundreds of years to come, for these buildings to be a timeless example of world class architecture, the likes of the Pompidou or the Louvre in Paris. With Sound Transit owning the property and the city open to land use changes, the community is able to go far beyond the standard mixed-use developments and actually envision something that will fundamentally enhance our already amazing neighborhood. But the key here is the community; we need to show Sound Transit and the City just how important this site is to us. Coming to the Design Charrette this Saturday is a perfect opportunity to show your support and participation. 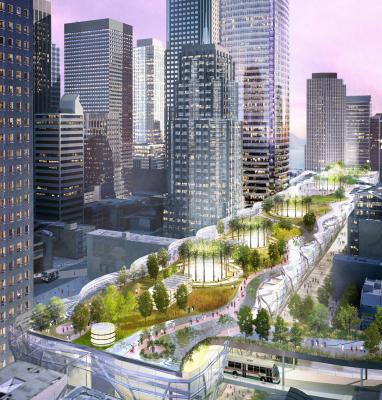 While it was sad to see some of the old buildings come down, we have been given an unprecedented opportunity. We now have 3 acres of land in one of Seattle’s greatest neighborhoods to play with. It is like we have been given an empty canvas and all the tools and paints we could ever dream of and told to do what we want. But again, the only way this will work is if we, as a community, are active and involved. We need to prove to Sound Transit and the City that this isn’t your typical development site, but that this project has the potential to tie all of Capitol Hill’s greatest pieces together in a once-in-a-lifetime achievement of urban expression. Capitol Hill is one of Seattle’s greatest neighborhoods, but it could be one of the world’s greatest neighborhoods. Its up to you, so sign up for the Design Charrette now!

* If you too would like to be a part of the Planning and Policy Committee send an email to [email protected] and we’ll put you on the email list and keep you up to date on all things planning on Capitol Hill.

would it be possible for images uploaded to be larger? my resolution is high, so i often see images on here that look interesting, but when i click on them, my only viewing options are small, smaller, and smallest. on the transbay transit center, the image in the article is 382×400, which is small, but when i click on it, the largest image is actually even smaller, at 229×240. can a dude get 764×800?

Your article is a great vision push to go and be heard and get involved for the long haul and help shape the use of this property.

It is a unique site with great potential.

And there is time to make its use produce exceptional buildings related to the need of the near community and the city.

It is a puzzle why Sound Transit is in such a hurry. I for one think we need to slow the process for larger discussion and more creative input.

There is a decade of construction – not yet even started. Reject first of all the Sound Transit push to go go go in the next few months.

They are such lame bureaucrats.

I will be at the meeting.

This is a great post Josh! It really captures the opportunities we have as a community to shape these sites. Mike with Curls, this is a community-driven event, not Sound Transit-driven. It is being hosted by neighborhood organizations and staffed by the firms that were hired by the Chamber to get more community involved and jumpstart the “visioning process”. Schemata Workshop is a firm on 12th that is very focused on preserving Cap Hill character.

I know it feels like a very long time until 2016, when the station will be complete, but it really isn’t. These days, real estate projects take years to put together, and we as a community must get out ahead of ST before they put these parcels out to bid. If we can craft a neighborhood vision for these sites, then we actually have a chance of seeing real public amenities in their redevelopment. As a result, it is so important that a wide variety of people participate in this Saturday’s and subsequent planning events – renters, shoppers, business owners, etc. Not just people who can draw! Everyone is welcome and I hope a lot of people turn out, even if it is the last sunny weekend in Sept.

If, we pace as a snail, it is still a lot of time.

I have attended all the meetings on C. Hill, and if you don’t think the majority were just a stacked deck of public relations, well, good luck.

Go, go, go only works for a rich bureuacracy that already has in mind its projected outcomes. How many staffers do they have devoting millions of pay day dollars to this stuff? And then the message to volunteer community members is hurry, hurry, 8 years is hardly time enough.

Here is the planning process as laid out by Sound Transit:
2009 – Community Outreach and input
2010 – Work with city on any desired land use changes
2011 – Develop Request for Qualifications (RFQ) which sets the requirements needed to be a potential developer
2012 – Send out request for proposals (RFP)and choose developers
2013 – Have development projects begin
2016 – Hopefully have some projects completed or near completed so that the site is active when the station opens

I know it seems like we should slow down, but the fact is that we have to deal with the existing beauracracy, and unfortunately that beauracracy moves at a snail-like pace. So I think it behooves to community to have some coherent plan in place as early as possible so that we can make sure our voice is clear when the RFQ and RFPs go out.

I couldn’t agree more Josh! I feel that the biggest decision point that we as a community need to influence is the Sound Transit disposition or lease of the land, and that could happen VERY SOON, 2011 according to your timeline. If we want a genuinely representative community process that identifies our desires for the space, we need to begin it now!

Take a deep breath, mucho time for excellent ideas to be explored, much more input from community voices and experts in many fiends to be consulted … much time … posters who work for Sound Transit need to own up to it as well.

(WW II was only five years)

In the meetings I attended between ST and the MontCap homeowners group, it seemed like a much faster time frame than 5 years. Given that ST is hoping to unload the large lots that are only for construction staging during tunneling so that they can be developed while the station is being finished, it seems that being proactive and getting people on board and interested early is better than sitting on our butts while ST thinks the community doesn’t give a damn how the lots get developed.
It was only once ST realized that there was a large community of concerned, united stakeholders involved that they truly were willing to come to the table and negotiate. Sadly the squeaky wheels are the only ones that get the grease, so we may as start squeaking now about what we want. And god knows it will most likely take a year or more for the community to reach a consensus on what it want.

OK, full speed ahead. BUT, take the time for well considered, brilliant ideas at a giant table with the whole community invited to participate.

Then, leverage to get it done.

Sound Transit is in the rail business, and that is fine with me. I do not feel they get en toto the potential of that site for full community benefit, and thus far, only vague conversations are in process.

Early stakeholders seem to be chosen to rubber stamp. Take the King’s money, do the King’s bidding. Then, tell the surrounding community done deal.

So, let’s get going, get brilliant and make sure real broader community is indeed the motive word for the future of that site.

M with Curls, what you state that you want is happening – a large and inclusive community process. The stakeholders group only existed to get this process underway, which is now happening. What this is going to take is passionate and consistent voices, like yourself, showing up and getting the community rallied around ideas that will push ST to actually address public benefit in the sale or lease of these sites. I hope you RSVPd!!!

Will try to be at this planning meeting – but – a giant conflict with prior plans pending for months.

Maybe. If not there, will be involved for the next 20 years. See, I have a long range perspective ….

Cheers. What a wonderful fall day and evening … Cal Anderson park is the place to be, with dog, friends and a few cold beers in a cooler bag …