You might have heard that indie celebs Zooey Deschanel and Ben Gibbard were married earlier this month in ‘a town near Seattle.’ Turns out, they honeymooned on Capitol Hill (oh, and she might not be vegan): 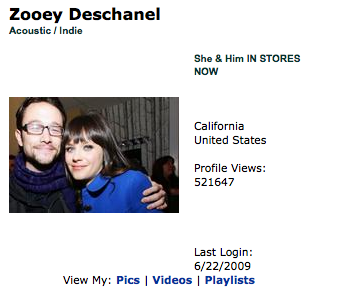 Zooey’s MySpace page. That is not her husband.

zooey’s vegan? hardly. she and ben were in the fatty, cheese-infested french bistro (aka cafe presse, in the capitol hill neighborhood of seattle) where i work about 11am this (monday) morning. i had no idea they had just gotten married! they were with ben’s whole side of the family and ben kept addressing his grandmother as ‘granny.’ it was pretty cute.

Now, before you think we’re giving credence to this report because of some random comment on the Internet, we also found corroboration for the sighting in Seattle University’s gossip rag student newspaper.

Hat tip to @lannyb for giving CHS a reason to read People magazine.

does just setting foot in Cafe Presse cause someone not to be vegan? They do have salads and falafel, you know.

if they were any cuter, we’d have to eat them…

how would you recognize them? they look like every other young couple on Capitol Hill…

yup, friends with their neighbor’s a couple of blocks from a pizza joint on the hill. Say them the other day, thought,m that looks like ben gibbard and zoey dechanel, then looked at their super meaty pizza, and thought ‘nah, guess not’. guess so! But I had the manners not to make them feel like they’re in L.A., and you should too, they’re just people with the bad fortune of being widely recognized.

+1 to michael, they looked like the three other people eating pizza right next to them!