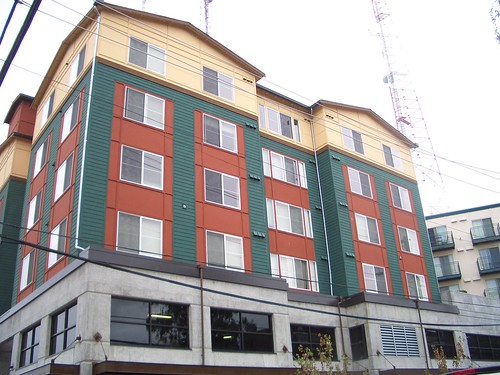 If there is one thing that is painstakingly obvious about Seattle right now, it’s the construction. New buildings are popping up everywhere and I’m curious as to who is going to fill them. Not only that, but who is in charge of them once they are built?

th and Madison above Trader Joe’s. The units weren’t selling as condos, so they desperately decided to lease them, and lease them to anyone. The building is more like a dorm now, with parties and noise and drunken people roaming the halls. Not quite what they had in mind for 1700 Madison.

Although it boasts luxury, large stains dot the carpet just weeks after being cleaned, again. Piles of puke can often be found in the stairwells, left for some fairy-maid to clean up. The entrance sidewalk was finally paved after 6 months of people moving in through dirt. The structure walls already have long cracks, the windows leak, and when it rains water rushes under the outside door into the hallway, causing the carpet and hardwood floor to bubble. My favorites: the beautifully crafted trim punctured by a nail gun and left to bare its open wounds, and the fake fireplace that blows as much hot air as the building brochures.

My friends went two weeks without knobs on their cabinets, and their building keys still don’t work in half the doors. A roaring jackhammer at 2 a.m. in the lower garages has caused countless sleepless nights, but never merit a returned phone call from management. The landlords expected people to pay hundreds of thousands of dollars for this bogus structure when they can’t even get their act together. Maybe this is why 1700 Madison still has open units.

If you research the company, you find it’s just the property of some big business offspring called Riverstone Residential, and the women in the office are only in charge of leases. So who is in charge of taking care of this building? Who returns the phone calls? The company’s regional president for Washington is located in San Francisco – not much help.

I just know that according to the City of Seattle Landlord-Tenant Laws, landlords are obligated to “maintaining roof, walls and foundation and keeping the unit weather tight.” I also know from experience that the city will do nothing to help you enforce your rights, and this must be stopped. Someone must be held accountable if we must continue to pay rent and occupy units unfit for habitation.

Riverstone Residential is part of CAS Partners. Their main headquarters is in Dallas, TX. It sounds like they are running this pace like many of their others. They own and manage some properties and just manage thousands of others poorly. More info at http://katysexposure.wordpress.com

We live in the phase 1 side of things and have had no structural problems as is mentioned above. As for maintenance, we had a leaky shower and they patched it up immediately. We do know of the dorm feeling problem though, we have loud students who smoke living below us and if we leave the door and windows open the smoke permeates everything.

They are taking some steps to help with the parties with new rooftop deck rules requiring deposits for groups of 5 or more to use the deck. Although I’m not sure how it’s going to be enforced. There have been police called to the building for parties, once because they were throwing beer over the balcony.

I don’t know how they can legally choose who to rent to without discrimination though. If someone qualifies for rent they can’t turn them down without a valid reason.

As far as it not being full, last week I happened to be in the office when another tenant stopped in to ask about a vacancy for a friend and the office person said they were full up with nothing available now.

Another blight on the butt of humanity!! It is this type of blatant disregard for the qualities of the neighborhood that allows buildings like this to even break ground.