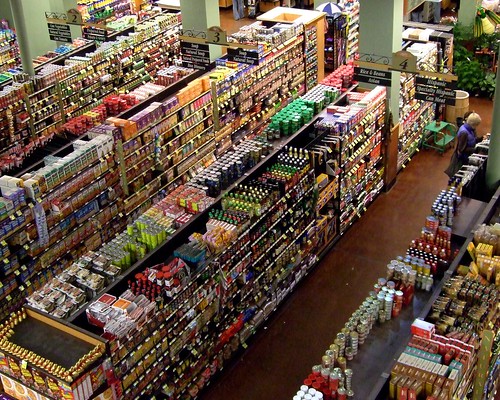 If the project comes to fruition, it will be a significant development for Capitol Hill. The new store would join a crowded Capitol Hill grocery environment with no clear leader. The QFC inside the Broadway Market has been upgraded from its old Fred Meyer days. The produce section is expanded and the company hosts wine and beer tastings that you won’t find in the typical QFC across the state. Broadway’s second QFC down in Pike/Pine is more typical of the chain’s offerings. Both stores are infamous for their near-daily reports of shoplifting. Meanwhile, there are Safeways at 15th and John and 23rd and Madison and Madison’s Trader Joe’s also keeps Capitol Hill pantries well stocked. As for Capitol Hill’s indie markets, there is only one large player left. Madison Market celebrated its 30-year anniversary last October. 15th Ave’s Rainbow Grocery went under in spring 2007.

The new store would likely eclipse all of these existing grocery providers when it opens in 2010. CHS is working to get more details before we reveal the rumored name and location. Please add anything you’ve heard in the comments or send e-mail to [email protected]

A town & country (Ballard Market) – all killer, no filler.

I wish it were Winco… I know they aren’t a major player here, and I can’t think of where there would be enough room, but their prices are great.

It doesn’t feel to me like we need another one… not right now, anyway. But these big stores think 10-15 years ahead, I guess, so they’re looking at all the density coming our way, and feeling growthy?

I’ve only been to the Metropolitan Market in West Seattle once – and I have to agree – it would be AWESOME if they came to Cap Hill!

How about Top Foods? But where would you put it?

Top Foods? On Capitol Hill? That’s all of what, 4 men?

Just kidding. But seriously, there aren’t any large scale developments that I’m aware of that have a grocery component to them coming on line for next year, so unless somebody is buying out somebody else, I think this is a non starter.

I am hoping for a PCC, but with the offerings of the Redmond/Issaquah/Edmond type store. No Whole Foods please.
Maybe a Metropolitan Market
Again, no Whole Foods.

not sure that a large scale development is needed. take a look at the pcc in fremont; that’s a pretty small footprint. i could see a store that size moving to broadway or pike/pine somewhere possibly.

but i agree, no whole foods. besides, there’s one a little over a mile away and they had trouble opening their newest location in interbay. i don’t see them making another store investment in the next year.

No idea where they’d put the beast, though.

My guess would be a Wal-Mart Grocery Store since Wal-Mart tends to dominate any market it moves into. Meanwhile the BMW building on Pike/Pine is still available and could be remodeled and open in 2010. Even has some parking – two side lots plus the SCCC parking garage.

No more high priced grocery stores !! I live in a low income building on the hill and personally think like in the old days we need a Safeway on Broadway again or some other grocery store that won’t take all of our money like the Broadway Market QFC does. Half of the time when I get my Sunday paper food coupons QFC never has the new food items I have to go to Safeway to get the new food items. And I know besides myself that there are other lower middle class and low income people who actually do live on Capitol Hill.

including the one on 15th.

Enough grocery stores, already. How about a home and garden store like Lowes or Home Depot instead?

What the heck kind of post is this?!? Allow me to summarize: “I heard an unsubstantiated rumor from a source that I cannot name. Now, please feel free to speculate.”

Thanks. I accidentally left out QFC 15th (my home turf grocer!) in my summary. (I also left out both 7-11 because you really should stop doing your grocery shopping there)

There’s talk floating around and I’m trying to nail down the next piece. We get some amazing tips here at CHS. Hoping for some help. In the meantime, sharing what I can.

I don’t think a Top Foods type of grocery store would work, given the Safeways and QFCs already there. There’s already a Whole Foods downtown near Cornish College of the Arts which isn’t too far from the Hill & they just opened a new store in Interbay so that seems a stretch, and I don’t see Walmart or Costco opening up in the city–they tend to like space. And Walmart especially focuses on lower income areas, which Capitol Hill is not (Walmart is also not LGBT-friendly but that’s a different topic entirely).

A PCC would be interesting, and Central Market could also be a possibility. Out of all the suggestions, I’d prefer a Costco, but I think that’s highly unlikely.

I have some knowledge and I believe the rumor is that it will be whole foods. It will be where the old BMW dealership is. The developer owns just about that whole block. It is also rumored that it will be apartments above it with underground parking.

It can’t be a Costco/Walmart Superstore…they don’t do dense urban areas and Cap Hill isn’t zoned for that type of business…has to be WholeFoods/PCC/Metropolitan. And, would it be that big of a deal? The yuppies/guppies/foodies with money will go nuts but the vast majority of the Hill will probably keep on doing the bulk of their shopping at Safeway/QFC/TJ’s and only shop at the new pricy place for occassional treats. In order to afford our rents/mortgages, most of us have to live on SOME sort of a budget…

So, to paraphrase, this is supposed to be a “massive store dominating the grocery market on Capitol Hill”. Metropolitan Market, Whole Paycheck Foods, Target, and PCC do not come close to fitting that profile. Metropolitan Market and Whole Paycheck Foods are higher end, more expensive. Target does not have a significant full-range grocery system in the region. PCC has a smaller store, specialty presence. The only stores that fit that profile and have a presence in this region would be Fred Meyer, Top Foods or WinCo. WinCo in a dense urban setting is not in character with their typical locations. Fred Meyer would be hurting its QFC cousins. That doesn’t leave a lot of logical alternatives.

How about a home & garden store *other than* Lowe’s or Home Depot? I’d much rather do business with a neighbor’s business than either of those giants. I don’t want Lowe’s or Home Depot (or Office Depot, Petco, Toys R Us, Best Buy, or Olive Garden) in my neighborhood. Yuck.

That the average joe is often unaware or unconcerned with where his food comes from is unfortunate, but not something I hope will be guiding business development in our neighborhood.

I’ve dismissed Madison Market as overpriced in the past, but have recently reconsidered that position after learning that a friend who probably qualifies as low-income shops there almost exclusively because she feels good about supporting them and their suppliers. She manages her money well and takes advantage of the co-op’s member specials and promotional offers.

Regardless of income level, we all have to choose whether to save a buck by shopping at the national chains and supporting unsustainable farming and transportation practices. I’m far from perfect, but I do far less of that than I used to, and I’m still making steps in the right direction.

Madison Market can be more expensive – but it also has “Co-op basics,” items selected every month to give access to organic, locally sourced staples to people of all incomes. It’s a sweet program. This local store does a ton for our community, and deserves support, regardless who comes in!

Albertsons? They are a pretty big player in the grocery market and the next closest locations are Mercer Island or up Aurora. I don’t think they would “dominate” the market though.

the word “organic” is barely regulated, even in california.

Fair enough, jseattle. I’ll be the first to say that you and CHS generally serve as an excellent new resource. But it seems to me that (a) any comment on this post would also be unsubstantiated, unverifiable and, therefore, useless as a news-gathering matter, and (b) you should have waited for “the next piece” before having published this post. I’m not trying to bust your journalism chops, but… I guess I am.

Has to be at the BMW site and would have to be more upscale. I’d love a store like New Seasons in Portland–high quality, organically focused, great deli and prepared foods, but you can still get Diet Coke.

Okay, so I changed my line of thought. I went from dominating meaning ‘size’ and I thought of other ways to dominate, and I came up with price.

How about Aldi? They’ve announced that they are expanding in the US, they’ve done very well where they are, and they have deep pockets.

What grocery store will it be???

A gigantic new expanded Madison Market, please!!!! Their business is booming! We need them in a sea of awful chain stores.

I do have a sneaking suspicion that it could be an Amazon Fresh retail location, though…

Aldi would be very good. (I shopped there when I was in Germany). I was sorry to see on their US website that they’re only in 29 states in the Eastern US. It would be excellent for them to establish a foothold in the Northwest.

but honest to god, that would just be perfect. not a big fan of the QFC in the old FM.

Already have a Whole Foods on Denny. The newest player to the supermarket segment in California is a chain called Fresh & Easy – it’s challenging Albertsons’ and Safeways (Vons). It’s not unimaginable that they may be eyeing Cap Hill. Anything bigger than the existing qfc on Broadway would cause too many traffic problems.