Seattle’s 2010 budget process is coming down to crunch time as the deadline approaches for the City Council to shape the plan outgoing mayor Greg Nickels proposed in September. Talk about participatory government — Councilmember Jean Godden will be hosting a conference call for citizens to discuss the 2010 budget this afternoon at 4:30 PM. Information on that and the rest of the Council’s budget schedule this week is below.

You can check out the attached PDF for a summary from the mayor’s office of the 2010 budget. This chart from the economic analysis portion of the report tells the story. Seattle — like the rest of the world — got slapped by the economic downturn. That means a budget plan that makes some hard cuts and dips into the city’s emergency funds. The current plan also calls for no increase in taxes. 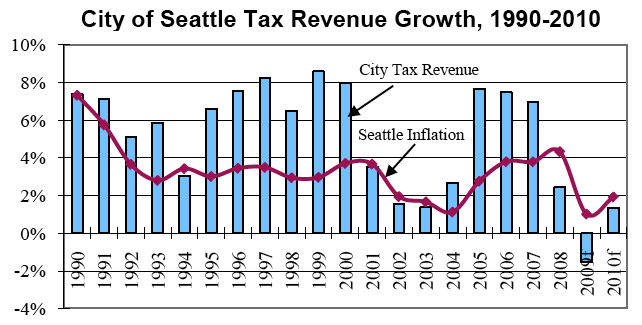 The biggest issues on the board appear to be:

PUBLIC HEARING  Opportunity for input on the 2010 city budget: This will be the third and final public hearing on the budget where the public has the opportunity to provide input to the Council on the 2010 budget. This hearing will be held in Council Chambers, beginning at 5:30 p.m. For those unable to attend, there will be a live call-in with Council Budget Chair Jean Godden from 4:30 – 5 p.m. Call-in number is 206-684-0481.

Department presentations and discussion of options: Council staff will present options to the City Council for possible modifications to the Mayor’s 2010 proposed budget. Check the Council webpage for agendas and related materials.

Department presentations and discussion of options: Council staff will present options to the City Council for possible modifications to the Mayor’s 2010 proposed budget. Check the Council webpage for agendas and related materials. 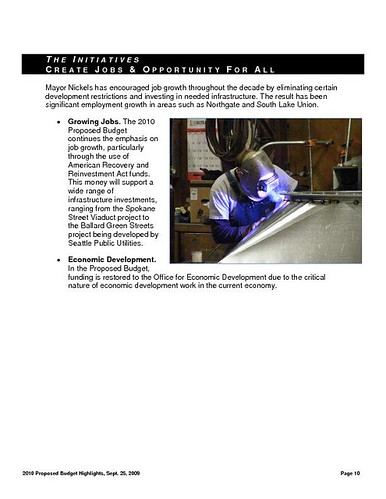 We’re in the hole, we’ve got to cut somewhere.

One small suggestion for those of us lucky enough to still be working stiffs:

The Community Council is asking that evening hours are kept too. A number of community groups use the library as a meeting place and since everyone has to work, they can only meet in the evenings. We have so few (free) community meeting places on Capitol Hill that I don’t know if we can afford to lose one more.