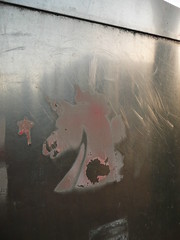 A mythological beast will soon take shape in Pike/Pine.

Replacing the recently evicted Satellite Lounge at 1118 E. Pike, the Unicorn is the project of first-time bar owner Adam Heimstadt and his two business partners. “It’s going to have a French, circus theme,” Heimstadt said. “My house is filled with amazing crazy things and furniture that I’ve collected through the years. Carousel parts. A mishmash. This is going to be a great place for all these incredible things.”

Heimstadt said the former Satellite location is the third place he’s tried to get for a Capitol Hill bar. He and his partners looked at other locations including spots on 14th Ave and the place on Union that will soon house Po Dog Hotdogs. He’s excited about the possibilities. “We’re looking at 7,500 sqft of space to fill including the huge basement. We’re going to open up the top first, the bottom later. The basement will be a mighty adventure,” Heimstadt said.

Heimstadt wouldn’t commit to a date for re-opening the top yet but says he plans to serve pizza at the bar and fill the space with arcade games and carousel parts. As for the 5,000 sqft basement, “We’re going to continue the circus downstairs,” Heimstadt said, adding that he’s happy to finally have a place to display some large, stone unicorn statues he acquired.

In the meantime, he’s going to continue working his bartender shift at the Twilight as he works with his partners to ready The Unicorn for its debut.

For the 35-year-old Heimstadt, who started tending bar when he was 20, opening a bar of his own has been a long-term goal. “I originally wanted to be a fashion designer,” Heimstadt said. “I ended up being a bartender instead. The past 20 years of creativity are going into this.”

I can’t wait for the upcoming Moulin Rouge/Unicorn Statuary/Shorty’s on Acid! I’m hoping for a trapeze and authentic 80’s Galaga machine. Hooray! Hooray!

Sounds like fun – hope there are stiff drinks and some decent food – C. Hill is not the Eastside, but, if done right, theme might help.

I fear a bit too up scale and expensive and frou frou… can’t be worse than the cupcake place across the street which feels like a mall location, and where there seems to be little traffic these days… cupcake too white and bright could use some unicorn juju for sure.

Who are the partners?

I doubt upscale will fit the description. Adam sounds like he has a peculiar (in a good way ) sense of style.

As for the other partners, they go unnamed because I want to make sure I spell their names correctly. But Ellie and Paul are friends, I’m told.

This sounds really fun and awesome! I’m just hoping Adam includes SOME sort of Vegan option on the food. Besides that, my girlfriend is going to fall in love with the theme.

Vegan – whole wheat toast – french fries done in veg. oil – salads of all kinds – veggies on the side – juices of all sorts – the list is fairly long…. I am surrounded by non meat eaters ….

Please have skee-ball. That is all.

I was going to add the same comment. Except for the steakhouse-style restaurants that attract tourists from other neighborhoods and out-of-town, you can’t stay in business on Capitol Hill without good vegan food. How about vegan pizza? Portland supports over 10 thriving restaurants that serve vegan pizza, Seattle only has two.

Mike with Curls’ list doesn’t count… that’s what vegans eat when they’re stuck in suburban Oklahoma and have to eat at a TGI Friday’s.

Good luck to the unicorn. Was Satellite Lounge failing financially which caused the eviction?

I live around the corner from the old, evicted Satellite. It was kind of our go-to place when we just wanted a fun, easy place to hang out. I spent a fair amount of time & money there. I really hope that this place will attempt to attract an eclectic crowd. We don’t need another Cha Cha or Pony. Something that can avoid being pigeon-holed a hipster hangout or total dive – somewhere less easily categorized. Just hope it’s gonna be cool whether 21 or 41, or older I guess. I think you catch my drift.

So i am no propaganda voice for the – yell to the wind and claim some super humanity – vegans. I eat a diet of all most all vegetables, which I love, without all the chest pounding like is such a big fucking deal.

I am a world class gardener as well and have raised edible food never seen in any grocery around here.

Vegans need to learn to cook – follows with the purity theory they cherish.

Good eating to ALL.

When is the Unicorn Bar supposed to open? Are there any events planned for the debut?