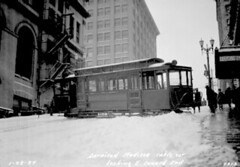 Lots of talk of trains and tracks and where to put things like streetcar maintenance facilities on Capitol Hill and nearby First Hill these days. Here is a look back at the turn of the 20th Century on Capitol Hill and the intertwined growth of the city’s cable car system and what would eventually become Seattle University. Historian Dotty DeCoster originally wrote this article for the Capitol Hill Times where it appeared in 2008 but it is not available on the Web. She is able to share her work with CHS and we’re happy to feature her take on the Hill’s history. We last featured DeCoster’s work in this piece: What Broadway mixed-use was like 100 years ago

1891 was an extraordinary year for Seattle. J.M. Thompson’s Madison Street Cable Car was completed, providing steam-powered transportation for people and freight up the steep hill from downtown and on through the woods and stump farms to Lake Washington. Also in 1891, Jesuit education began in Seattle at the original site of Immaculate Conception Church near the south east corner of Madison Street and Broadway. Now part of Seattle University, the 1910 car barn at 10th and Madison has been transformed. This low, brick clad building at the 10th Avenue entrance to campus is easy to miss . During its 98 years, however, dynamic changes have transformed the building and the neighborhood.

The original car barn and steam power house for the Madison Street Cable Car was located on the south side of Madison Street between 20th and 21st Avenues. The Seattle Electric Company, a local branch of the Boston firm Stone & Webster, purchased the Company along with most of the other cable and street car lines in 1900, and converted to electricity. A new power house and car barn was designed for Madison Street electric transportation during 1910, and the building in the photograph was constructed on the south side of E. Madison Street in the triangle at 10th Avenue: 1025 E. Madison. The building housed electrical generators, as did it’s twin” at 10th and James Street, and provided facilities for maintenance of both cable and street cars until 1940. From about 1911 on, the cable car ran up from downtown to 14th Avenue and streetcars took folks the rest of the way out to the Lake.

Meanwhile, the Society of Jesus worked for decades to develop a Jesuit college just east of Broadway near Madison. Beginning with a Catholic school for children at Immaculate Conception in 1891, the struggle continued until 1931. In 1904 Immaculate Conception Church moved up to 18th Avenue. The Catholic population of Seattle increased significantly in the first decade of the twentieth century, and by 1910 Seattle College had an enrollment of 200, 16 men in the college department. Like the early University of Washington, Seattle College had to teach secondary school to prepare students for college level coursework. World War I, however, was hard on the College, and in 1918 college level studies were suspended. During 1919, Jesuit education moved up Broadway to Roanoke and continued there until 1931, creating Seattle Preparatory School while still teaching college-level courses to a few young men.

In 1931, Seattle College came back to Broadway and Madison. The campus, and around it the old First Hill mansions, was disintegrating into the blackberry vines. Yet a small group of extraordinary Jesuit teachers re-established Seattle College that Fall, and Father James McGoldrick organized a new evening extension school” available to women as well as men. By 1936 the 4-year program at Seattle College was officially certified by the University of Washington – the vision to create a Jesuit College was finally realized. In 1948 Seattle College became Seattle University.

The Seattle Municipal Railway, however, was in trouble. The City had purchased the Seattle Electric Company street and cable car systems in 1918. In 1936 this included ”410 streetcars on 26 electric routes, and three cable railways” (HistoryLink.org essay 2707) and the City had a $4 million deficit and still owned half of the principal on its 1918 bonds”. In May 1939, the [federal] Reconstruction Finance Corporation loaned Seattle $10 million to pay off the streetcar debt” and the last streetcar completed its final run on April 13, 1941.”

On April 21, 1941, [Father Francis] Corkery [Seattle College President] paid $9,000 for the old Madison Street cable car terminal as a home for the new School of Engineering, then being organized by Father Edmund McNulty, SJ.” (Seattle University; A Century of Jesuit Education” by Walt Crowley, Seattle University, 1991) In 1951, Seattle University conducted a complete remodel of the building, creating classrooms in the basement and on the first floor, new plumbing, tile floors, a central heating plant, and covering the outside walls with brick. In 1952, the City vacated a portion of 10th Avenue, creating an entrance to the campus just west of the building. Subsequently, a portion of E. Spring Street was also vacated and remains a walkway on campus. Now the building serves students of the Fine Arts. The entrance is on the former Spring Street side of the building and a plaque in the entry commemorates the car barn.

Documents and records of the old car barns are hard to find. I recommend particularly the Seattle Municipal Archives and the Puget Sound Regional branch of the Washington State Archives as sources, the Museum of History and Industry for rare photographs, and the Seattle Public Library Seattle Room for books, maps, and background information.

I love it that the City is taking a giant step into the 1890’s in their transportation planning.

Not only do we need to bring a streetcar line back to Capitol Hill, I also think we need to confiscate everyone’s cell phones and re-string telegraph lines through CH.

don’t forget that the first gas and electric cars also showed up around the turn of the last century – let’s move on to personal hovercraft!

for the historical perspective. I enjoy your pieces.

Funny that you should mention bringing a streetcar line back to Cap Hill (& First Hill) — did you know that conversations are happening RIGHT NOW around that very topic? It’s something that will probably come up at the Mayoral Candidate Forum at Seattle University THIS SATURDAY (4-6pm) in the Pigott Auditorium at the Business School. You should stop by!