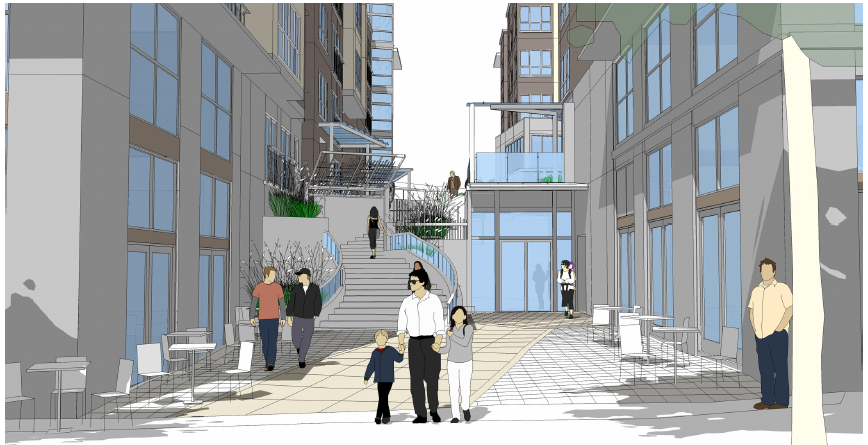 It may well be that a huge player is about to upset the grocery store balance of power on Capitol Hill.

But it won’t be Whole Foods.

In October, CHS learned that a large grocery store chain was considering opening on Broadway when the Joule mixed-use development is completed late next year.

Now we have learned that the “natural” and organic grocery giant will not be opening its fourth Seattle store any time soon and that Joule is still on the hunt for a big name retailer to lead its commercial offerings.

“There’s no plans for a new Seattle store in 2010,” Suzanne Strick, Whole Foods marketing coordinator for the Pacific Northwest, told CHS. “It’s a constant evolution dependent on many factors including how our stores in the area are doing. But there are no new leases planned.”

When we talked to her after the rumor surfaced, Jennifer Severson of Real Retail, the firm charged with finding tenants for the Joule’s retails space, said that the grocery giant had come calling. “They are interested in the project but we don’t have anything signed yet,” Severson told us at the time.

But when we talked to her last week, Severson sounded less optimistic. “The Whole Foods thing is not going well. Those type of deals take time.” Severson also informed us she was leaving Real Retail to join another brokerage.

Even if Whole Foods were to change its plans and make the decision to open another Seattle store, there’s no way for the company to match up with Joule’s timeline, Strick said. “It’s not just as easy as putting together a basic grocery store. The services we offer, those take a lot of development. This isn’t a six month process.”

Whole Foods recently opened its third Seattle store in the Interbay neighborhood. A project that would have brought the Austin-based grocer to West Seattle is tied up in a legal mess and has stalled construction on a site now dubbed ‘Hole Foods.’

The opening of Whole Foods on Broadway would have been a significant reawakening of an area of the Hill that has been fading as the large construction projects of Joule and the Brix condos across the street take shape. Some will recall that the location where Joule is being built already hosted a grocery store in the past: Here is video of the demolition of the old QFC that used to call the corner home.

With 29,000 square feet of planned retail space, the Joule development will bring radical change to north Broadway when it opens in fall 2010. “There’s 30,000 feet of retail in this project. Having a tenant that is a big draw is desirable for everybody,” Severson said.

Meanwhile, the QFC inside the Broadway Market has been upgraded from its old Fred Meyer days. The produce section is expanded and the company hosts wine and beer tastings that you won’t find in the typical QFC across the state. Broadway’s second QFC down in Pike/Pine is more typical of the chain’s offerings. Both stores are infamous for their near-daily reports of shoplifting. There are also Safeways at 15th and John and 23rd and Madison and Madison’s Trader Joe’s also keeps Capitol Hill pantries well stocked.

As for Capitol Hill’s indie markets, there is only one large player left. Madison Market celebrated its 30-year anniversary last October. 15th Ave’s Rainbow Grocery went under in spring 2007.

With the removal of Whole Foods as a player, Real Retail has its work cut out for it getting a big name in the game in time to make the fall grand opening:

The Joule on North Broadway is a new mixed-use residential development and retail project currently under construction. Located on North Capitol Hill directly across the street from Jerry Traunfeld’s brilliant new Poppy restaurant, The Joule is ideally situated to capture some of Seattle’s wealthiest and most distinguished neighborhoods while embracing its vibrant and eclectic street life. The Joule will have over 29,000 square feet of retail space with 295 residential units and 65 parking spaces dedicated to retail customers. The space will be delivered to Tenants in Spring/Summer 2010 with a grand opening in Fall 2010.

What businesses will be at the center of that grand opening remains an open question.

I’m puzzled by the comment that Whole Foods “would have been a significant reawakening of an area of the Hill that has been fading as the large construction projects of Joule and the Brix condos across the street take shape.” Brix is open and its retail spaces filled, with Vivace in particular doing brisk business. While Siam on Broadway is sadly gone, Poppy, Olivar, and Roy St Coffee have all opened, as well as the new gift shop (Edgar, I think) and the new creative space on the west side of Broadway, where Rom Mai Thai is newly remodeled. Broadway from Republican up to the Roy intersection has a lot going on right now.

To hear the rumor mill, tinged with angst, – you would think Broadway is half boarded up. Interesting isnt it, the change is viewed as decline rather than matter of fact – just businesses coming and going – just plain old change.

The old Broadway was swept away some 10-15 years ago – I do little window shopping or just casual strolling around, but, still use bars, eateries, QFC, coffee, flowers, post, Dicks, and other, 8-10 times a week.

Thank God! I could do without another Whole Paycheck in Seattle. QFC is pricey enough. We could use a grocery store for the “ordinary” Jane and Joe. My vote would be for a Top Foods.

Let’s face it – QFC has the others scared. Three stores on the Hill – remember 15th – and Kroeger is mega chain competition. And going back to its roots, QFC was a local chain. … still has a Seattle aura.

For once, I agree with you.

I should have written:
The opening of Whole Foods on Broadway would have been a significant reawakening of an area of the Hill that has been *changing* as the large construction projects of Joule and the Brix condos across the street take shape.

I’d rather have another PCC move into that area. At least, it’s a local business.
Having two large grocery stores (QFC vs Top Foods) so close together would be advantageous to the consumer if they took part in price wars.

Seems Whole Foods is not union – my god – in Seattle which is renowned for being a union town – not union wage checkers – my god.

My dollars and support will stay with Safeway and QFC … union shop.

I’d murder for a Trader Joes in the location. OR a grocery store that doesn’t rob you blind. Ever since the closing of Safeway I’ve been highjacked for thousands of dollars from QFC… Bring us something more affordable!

Thanks goodness we aren’t getting the overly priced Whole Foods.
How about someone local, with better prices, that supports local farmers, ranchers, and pays employees a good wage with actual health benefits…. how about a PCC. We have a trader joes on 19th. QFC is horribly overpriced.
I think this type of establishment fits in nicely with the area, and what this city and neighborhood should be supporting.

Business has been booming at Madison Market. Are they considering a space upgrade? PCC would be great as well.

I hate to be judgmental, but please – think twice before shopping at QFC, Trader Joe’s, and Safeway. You might as well do your grocery shopping at Walmart in Renton.

Mad Market owns the building they are in (or at least the first floor they built) so I doubt they would move. Plus, their footprint, like TJs is tiny compared to Whole Foods.

How about one of those? They love them on Queen Anne and West Seattle. OK, they’re not cheap grocers….

I agree !! I as well could do without another very expensive grocery store !! I also say give us Top Foods !!

“…Having a tenant that is a big draw is desirable for everybody,” Severson said.

Actually professor Severson, Broadway proves the exception – here the opposite is true: A balanced collection of smaller scale retail / office / service is what’s ‘desirable for everybody’. Market research; look into it.

I live in the CD (Squire Park, to be exact) and heard that Whole Foods was looking to build a new store where the Red Apple currently sits. I believe that CADA owns the site and is selling it…nothing I can find on the CADA.org website mentions the sale or who the new owner is… anyone have the scoop?