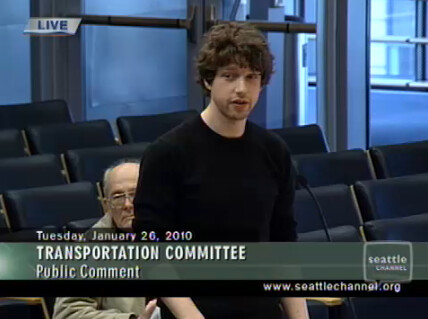 The Seattle City Council’s transportation committee heard an update Tuesday from department of transportation planners on the streetcar that will connect to the Broadway light rail station and circulate riders from the International District, to the edges of First Hill, the Central District and Capitol Hill. The committee also got an earful from the Capitol Hill Community Council who had four speakers participate in the public comments portion of the meeting to make the case for an extension of the streetcar route to Aloha and designing the project as a reinvention of Capitol Hill street-use.

We’ve included links to individual sections of Tuesday’s meeting — thanks to the Community Council for the handy YouTube work. You can view the full Seattle Channel broadcast here.

No major new announcements or news around the alignments but the most interesting takeaways were the strong presence of the Community Council, the amount of interest the councilmembers showed in the Aloha option and some of the questions councilmembers had ranging from population of First Hill to cost overruns (city is on the hook) to how an Aloha extension might be paid for.

On that note, as the interpretation of the agreement between Sound Transit and the city for the construction of the streetcar outlines a route that ends at the future light rail station at Broadway and John, Sound Transit is not paying for an extension of the route up Broadway to Aloha. That leaves the city to come up with a plan to pay for the stretch itself. Or find a source of funding. Transportation committee head Tom Rasmussen brought an interesting option to the discussion on Tuesday. Federal grant opportunity FTA-2010-001-TPE is a Department of Transportation program to make $130 million available to “Urban Circulator Systems.” The good news is this grant exists and that, hey, somebody with the city is thinking about it. The bad news? Applications are due February 10th and this is the first we’ve heard of it. We’ll follow up with SDOT and Rasmussen to find out what the possibilities are that this grant will solve the Aloha question.

Here are the clips from the meeting:

Of  all the plans proposed to date, we think that the CHCC plan and its three key recommendations provide the best balance of transportation and community needs in this most densely populated area of Seattle. Further, we believe it is the plan that best addresses the access, safety and pedestrian elements at Cal Anderson Park.

We look forward to working further with the community and the city to refine these transportation solutions as they affect the Capitol Hill neighborhood and Cal Anderson Park.

All tracks lead to another set of community meetings coming up in February. Looks like SDOT is planning to hold the meetings in ‘open house’ format again which is a good way for lots of 1:1 discussion opportunities but also makes it difficult to pin anybody down on anything. Given how much of the streetcar plan is still up in the air, avoiding a ‘pin’ might not be a bad idea.

The city has combined input from hundreds of comments about alternate routes with other factors including bicycle routes, streetcar ridership and economic development potential, possible utility conflicts, travel times, capital and operating costs, traffic and parking revisions, and urban design opportunities. Information based on these criteria will be shared at the meetings.

These community meetings are part of the public dialog that will continue over the next three months, leading to a decision by Mayor Mike McGinn and the Seattle City Council on a route for the new line. Construction is slated to begin in 2011 and the streetcar would begin operating in 2013 with Sound Transit funds previously approved by voters.

The open houses will be held:

Community members may request an interpreter for any of these meetings by contacting Kate Miller at 206.838.9224 or [email protected] at least five working days prior to the event.