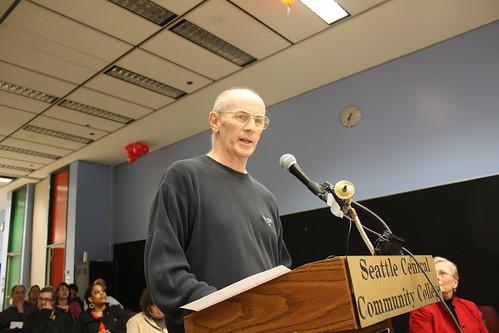 There wasn’t much being said at Thursday night’s meeting to gather public comment on Sound Transit’s application to allow nighttime construction noise at the Broadway light rail site. Only one community member signed up to speak during the 90 minute session set aside for public input and the meeting wrapped up more than an hour early.

We asked DPD representative David George, the person in charge of collecting community feedback on the application, if he was disappointed in the lack of public comment at the meeting. “I am disappointed that more people from the east side — the people along 10th Ave who live right by it — didn’t come out,” George told CHS. “But we have received some very good written comments and will probably be able to meet with some of the residents.”

The purpose of the meeting was to add to the public feedback the Department of Planning and Development is collecting as it considers Sound Transit’s application for an additional 6 decibels of construction noise at the Broadway site during the overnight hours of midnight to 5 AM. The rest of the day, Sound Transit’s contractors will be subject to the city’s standard construction noise ordinances.

DPD has extended the period for written comments to be submitted to February 18. You can e-mail yours to [email protected]. DPD will have 60 days after the close of public comments to make a decision on the variance.

The lone public commenter Dennis Saxman, a neighborhood activist and Neighborhood Plan representative, spoke out against the lack of specificity in Sound Transit’s plans to mitigate nighttime noise at the construction site, and asked that the agency’s requirements for the contractor working at the site be made public before the variance is granted. You can find his written comments that he sent to DPD — and was kind enough to share with us — in the attached PDF. Here’s a clip of the final portion of Saxman’s statement:


Sound Transit, meanwhile, began the meeting with a brief presentation about why they need the variance — safety, cost, speed — and what they are doing to lessen the impact of the around 10% increase in nighttime noise the work is expected to cause. Here are the Sound Transit slides:

Some of the more interesting takeaways from the presentation: 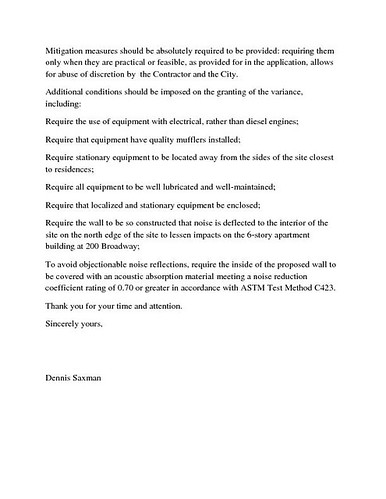 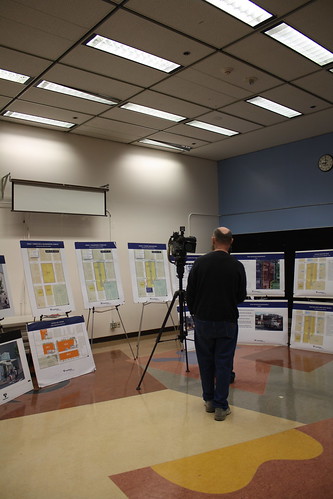 y’all want it built, get ready to live with it. it will be loud and dusty this august–very dusty come that 5th season between summer and fall, get used to it. The monied folks that will inhabit the area after its built do not even live there, yet. slapping a trolley up and down bway (i’ll take it every day since i live in pill hill and work at the u) will be even more congestive…however it is progress. Gona be a little rough for anyone who live within the realms of all those trucks–esp on olive headed to the highway. It would be amazing if they could dump some of that earth on CH and make a great look out hill like gasworks for the resident of the area.

Can we just stop with the endless community meetings that really do nothing but delay delay delay? Full speed ahead and build that thing. Get ‘er done.

Did Sound Transit address any of the concerns that were voiced eight months ago at the last public forum on construction noise they held?

In response to CHS’s coverage of that June, 2009, meeting, I previously wrote:

What changed since plans were made that necessitates generation of an unlawful level of construction noise?

That first question Justin paraphrased (mine) was, “What can you say to convince us that the noise variance you’ll request — to allow you to do things in our neighborhood that would otherwise be illegal — is necessary to allow for construction that is otherwise impossible and that the variance is not simply a cost-cutting measure? What are some limits you’ve hit with regards to noise reduction strategies?” I don’t think Ron’s and Jeff’s answers were convincing, and they didn’t give any examples of areas where they’re doing everything they can and must resort to side-stepping the law because doing things legally is simply not feasible. They just went back to some distracting talking points about increasing safety.

At no point during the meeting did anyone say, “We’re going to do everything we can to keep noise levels in your neighborhood low, but we suspect that in some cases, we’re going to need to convince the City to allow us to make more noise than would otherwise be allowed,” or, “We’ve studied other construction projects in dense, urban, neighborhoods, and here’s what we’ve learned about the latest methods.” They told us that they’d do the same things they did for Beacon Hill station construction and that few people complained about noise during that project.

Is increasing worker safety really an option? How did Sound Transit plan to do this work in the first place: in an unsafe manner, or by imposing an unlawful amount of noise on the neighborhood? What good is the our city’s noise ordinance if it is to be disregarded whenever a noisy project comes along? When Sound Transit finalized plans for construction, did they not take into account the laws that would govern their construction methods, or did they assume that they would successfully bully the public into allowing them to do whatever they like?

I’m all for getting this job finished as quickly as feasible, but I’m concerned that given the choice between telling contractors to do what it takes to keep noise at a legal and responsible level or convincing city government to allow them to disregard the law, Sound Transit will pursue the latter absent pressure from the public.

Capitol Hill, strong supporters of public transit (particularly back when Sound Transit were selling us on their proposal and their construction slogan was, “You’ll never know we’re here”) is already helping to keep construction costs low by dealing with cut-and-cover station construction instead of deep-boring and with one station instead of two (much of our Neighborhood Plan, developed ten years ago when rail was to be completed in 2006, relies upon early plans for two Capitol Hill stations). Now we’re being asked to accept additional noise so that more effective — and undoubtedly costly — noise abatement measures will not be required. The cost of doing heavy construction for over a half-decade in the heart of the most densely-populated neighborhood in the region in a responsible and respectful manner should have been factored into the construction budget from the beginning. If it wasn’t, then someone made a big mistake, and pushing the cost of that mistake off onto the neighborhood is not an appropriate response.

I am also concerned that if Sound Transit is forced to choose between effective noise abatement and not working 24 hours per day on tunnel and station construction, they may choose the latter, then blame construction delays on neighborhood activism instead of on their own reluctance to devote available resources to construction methods that are respectful of neighborhood residents.

Hey Max – construction HAS started. You think a 2 hour hour meeting off site is stalling a 6 year project?

I like the attempt at PR and community conversation. Nice touch for those of us with a bit more patience…. and who like information.

What’s the point? It’s not like the government has any accountability or interests in what we want. They only hold these sham “hearings” to give the gullible public the impression that they give a fuck what we think. We can hate this project all we want and all we get are two minutes at a microphone and the people in charge can ignore us when we’re done. That’s liberalism in power, folks. That’s the best liberalism can do: use the “political process” up until it actually matters.

Then, of course, you have the elitest liberals who say people are just too stupid to get involved or care about the political process. That’s when you start to hear liberals say things like “Things would be so much better if this were a dictatorship…” I actually heard a well-known local liberal say that.

OK. Not everything that government asks for is wrong. That tunneling mole really is hard to stop and start. Same for the attendant equipment train that goes with it. For both logistical and time reasons, it would be downright dumb to require them to stop everything every day.
So yes, if that would be forced onto Sound transit, that would delay the completion of the tunnel, and increase the costs. And yes, sheer stupidity from some community activists would be the blame. NOT Sound Transit.
So I guess, you need to ask yourself, is it more important to sound important and be a pain in the butt, or just be responsible, and say. OK, do it, BUT, we will monitor.

No, it’s democracy in power. The people voted for this and despite the few loud angry ranters, the vast majority of people on Capitol Hill support light rail, and this project in particular. Sorry you’re having such a cynical life.