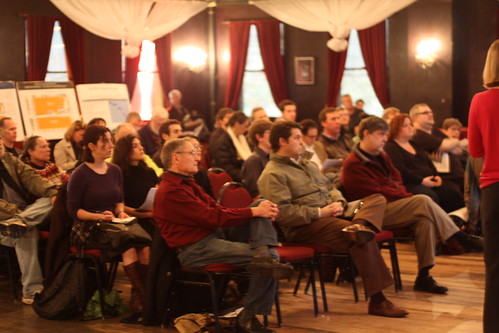 It’s a good thing Tuesday night’s Sound Transit forum to discuss ‘transit oriented development’ was the last in the series. It sounds like people are ready to move on and start working.

“We are about to launch a campaign,” said Cathy Hillenbrand, a member of the working group that has been meeting with Sound Transit about the development process. “You can do a little or a lot. You don’t have to give the rest of your life to Sound Transit’s TOD process.”

“Our goal is to build something really spectacular on this TOD site,” Hillenbrand said as other members of the community working group circulated the Century Ballroom handing out informational bookmarks and a sign-up sheet for volunteers. You can see the group’s study of the potential for Capitol Hill light rail development in this CHS post where they shared the reports.

The development process will shape the kinds of retail, housing and community spaces that will fill the land surrounding the Broadway light rail station when it opens for service in 2016.

Around 50 people attended Thursday night’s meeting which included a presentation from Sound Transit outlining status of the development process and questions from the audience. Sound Transit summarized the development forums and outlined their interpretation of the community feedback received at the meetings. A copy of Sound Transit’s presentation is embedded below. We’ve also included notes from the night’s session. If you attended, please chime in with any takeaways, additions or corrections.

CHS Blog has out done itself in this report. Nice job, tons of information, a slide show and highlight of the main issues raised at the forum.

What happens on this land after the station and tunnel is finished is of prime importance to The Hill and Central Bwy. The chance to have a community center and other community/cultural spaces is now, or never. Such a prime location will not come along again anytime soon.

Get involved and help send messages to Sound Transit that they can’t just cook some deal with developers who may do good work or shoddy work…. with token paybacks to the neighborhood and community resources.

Sound Transit seems convinced they must help the Farmers Market, good, but that is just one slice of a much bigger community resource pie. And maybe the easiest, as the city’s Farmers Markets are funded, organized by a central agency, and well liked and only need an assurance of space. Easy, easy stuff.

Again, good work, jseattle, whomever that is. (my cat says it is a guy named Justin)

and thanks to the people whose time & effort provided the quality community input for this development. I’m excited by the ideas for a community center on the park side, a farmers market, an art center and (gasp!) parking.
I’ve gotten so used to seeing “empty condo upstairs/empty retail downstairs” development over the past few years, that I was expecting more of the same here.
2016 is not so far away… I am looking forward to our transit station center and it’s community orientated building!

Wow, is it really necessary to spend 3 years in public review and another 2 years in selecting a developer?

I’d far rather have the light rail station 4-5 years earlier, in 2012, than have 4-5 years of talking about it before construction even begins.

It may be my ignorance of what happens in these reviews and why they are necessary. Does anyone know why steps 2-4 require five years and why they cannot be expedited?

Use of the surplus land cannot go forward without the tunnel and station finished. Or mostly.

A giant construction site still in use can’t be diverted early.

Two items here, the tunnel/station construction which has started, they are fencing the site as we post, cleared some trees, and getting ready to dig this summer. At the the Broadway location the tunnel will be dug, two tubes in each direction, north to the U Dist., and south to the International Dist. It is the primary site, thus, station and tunnel both under const. at the same site. Also that is the reason Sound Transit took such a large site.

Then the station structure will be constructed. Then extra land/site will be vacant and left for the various ideas to develop….. go community center and arts center.

Yeah it is long. Just hope the tunnel drilling rigs don’t get stuck, etc. Could go much longer…. and that has happened.

… I think you meant to say Tuesday night and not Thursday night.

Thanks. Had Thursday on the brain all day. Sad little brain…

Yeah, the construction of the station and the site availability is dictating the above milestones. I look at it more like: “We only have a couple years to come up with and organize an awesome plan for this TOD site to meet the above deadlines.”

It would be a shame not to acknowledge Betsy Hunter of Capitol Hill Housing who, though she could not attend this meeting, presided over the community stakeholder group and negotiated the many benefits that we’ll all enjoy (most people don’t know that the original ST plan called for a open plaza without a single unit of housing.

Betsy spent countless hours on this project; her deep knowledge of Capitol Hill and her unswerving determination to steer the outcome in a positive direction are unquantifiable.