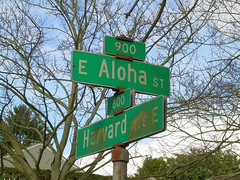 One of the more intriguing topics that came out of our report on the City Council transportation committee’s briefing on the streetcar was talk of seeking a federal grant to help pay for an extension of the line beyond its planned light rail station terminus all the way up Broadway to Aloha. We learned today that Seattle won’t be applying for the grant that was being eyed for the extension. But that won’t, a City Council aide tells us, end the search.

The interpretation of the agreement between Sound Transit and the city for the construction of the streetcar outlines a route that ends at the future light rail station at Broadway and John. Sound Transit will not pay for an extension of the route up Broadway to Aloha.

That leaves the city to come up with a plan to pay for the stretch itself in time for the currently planned start of service in 2013. Federal grant opportunity FTA-2010-001-TPE, a Department of Transportation program to make $130 million available to “Urban Circulator Systems” was considered to cover the city’s portion of the streetcar bill.

Ann Corbitt, aide to City Council transportation committee head Tom Rasmussen, tells CHS that the city considered applying for the grant but determined that the streetcar project was not far enough along in the planning process to qualify for the grant. But she added that this doesn’t end the possibilities for an Aloha extension. Corbitt said there are upcoming grant opportunities that could provide the funding necessary to extend the route.

Seattle Department of Transportation planners have said that the extension will cost between $25 and $30 million to complete.

An extension to Aloha is among a list of priorities the Capitol Hill Community Council is pursuing in the streetcar planning process.

UPDATE 9:00 PM:
We heard back from SDOT planner Ethan Melone who backed up what we heard from Corbitt:

FTA’s eligibility criteria for the program require that urban circulator projects have completed Alternatives Analysis (AA) and Preliminary Engineering (PE).  Unfortunately, the north Broadway extension of the First Hill Streetcar is not eligible for this particular grant opportunity, as the AA and PE have not been completed.  We anticipate there will be other Federal streetcar funding opportunities and we will fully explore those.