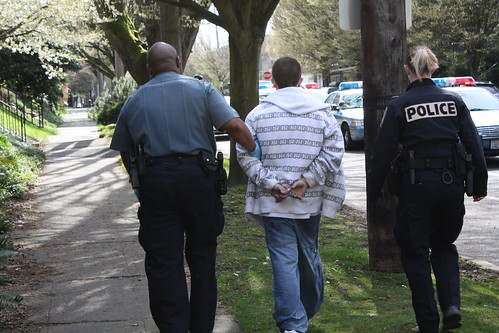 Seattle Police arrested a man this afternoon after an alert neighbor reported seeing the man breaking into a home in the 900 block of 19th Ave E.

Multiple patrol cars and officers descended on 19th Ave just before 2 PM after a man working on the building he owns next door called 911 to report the break-in at the neighboring home. The neighbor told CHS he watched the person who was arrested tap lightly on the door of the home to determine if anybody was inside before breaking in. Another witness reported seeing the man driving in the alley behind the home prior to the break-in.

At the home, officers were collecting evidence from the suspect and rounding up property collected at the scene to try to determine if it belonged to the homeowners or was taken from another burglary.

Congratulations on getting that arrest shot. Hard to pull off.