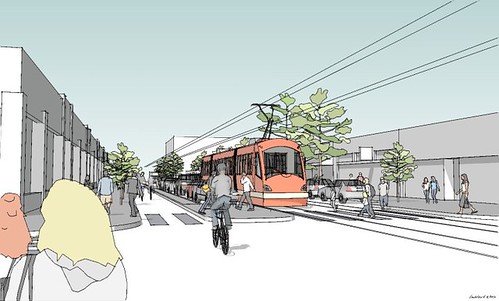 From the way things are shaping up, it’s not a question of the City Council supporting a First Hill streetcar route on Broadway  — only a question of how far north it will go and how radically it will transform Capitol Hill and surrounding neighborhoods into a more transit, pedestrian and bicycle friendly environment. In a meeting of the Capitol Hill Community Council last Thursday night, Seattle Department of Transportation planner Ethan Melone revealed that the resolution the City Council will soon vote on for approving the streetcar project contains language enabling his department to begin planning an extension of the route to north Broadway, perhaps as far as Aloha. Here’s the passage from the just released proposed resolution 31207 :

Section 4. SDOT shall seek funds to extend the First Hill streetcar
route north on Broadway, beyond Denny Street and Broadway. In addition,
per Section 1 of the Funding and Cooperative Agreement between Sound
Transit and the City, SDOT should request the Sound Transit Board allow
the City to use any excess capital funds provided by ST2 for the First
Hill Streetcar Project for the purpose of extending the Project’s route
north on Broadway.

In addition to the section enabling the start of planning for a northern extension of the route beyond a terminus at the location of the future light rail station at Broadway and John, the resolution includes a section calling for plans to improve transit on First Hill and along 12th Ave as part of SDOT’s overhaul of Seattle’s Transit Plan. It also gives the City Council oversight and opportunity “to provide feedback on design issues and options, including station locations, cross-section alternatives, possible traffic and pedestrian issues, plans for bicycle integration, and the location of a maintenance base.” 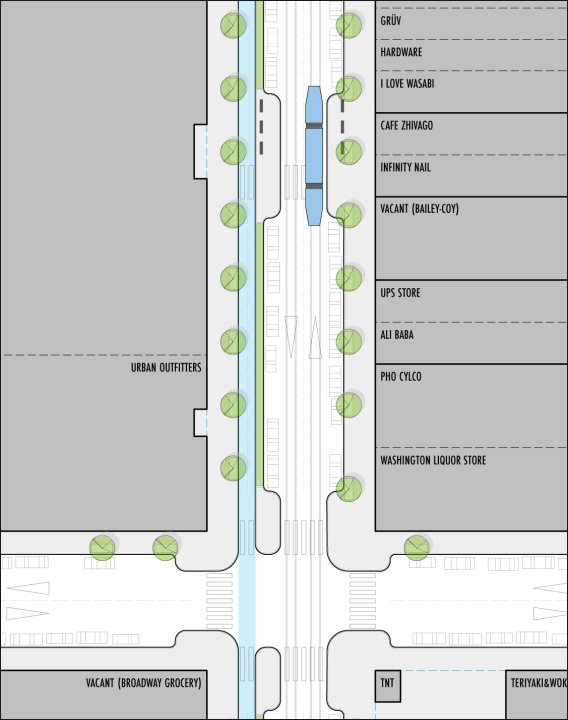 At Thursday’s meeting, Melone said SDOT would request $750,000 from the existing Sound Transit budget for the streetcar project to start the north Broadway planning process. For more — and deeper — analysis of the resolution, check out Seattle Transit Blog’s write-up on the north Broadway extension.

The mere presence of the section in the resolution is a major victory for the citizens and business owners behind the Capitol Hill Complete Streetcar Campaign who have been advocating for a plan to extend the route and improve the streetscape for pedestrians and bicyclists. The group is urging people to come out and support the campaign at this week’s City Council Transportation Committee public hearing on the streetcar:

What:   City Council Transportation Committee to hold public forum on the future First Hill Streetcar Seattle – The Seattle City Council’s Transportation Committee will hold a public forum to take comments from the community on the Mayor’s recently selected alignment of the future First Hill Streetcar. The community is encouraged to attend and give input on the “Two-Way Broadway” route before the Council makes a final determination on the alignment in early May.

Personally I’d like to see it run even further north. Back in the thirties the streetcars used to run the same route that the #49 does today, maybe someday we can put all that back in!

I don’t understand why we are even considering this. The South Lake Union line appears to have no purpose outside of a tourist type roll on a street car. It looks like the First Hill Streecar will just sit in traffic with the cars and buses . There’s a large amount of people who walk that corridor all the time. Is there something wrong with walking? These are very difficult economic times and I don’t get why we would spend money on this type of project. How many failing mass transit systems does one small town need anyway?

I don’t really understand it either. If Bway was closed to cars then it might make more sense, but they’re going to be sitting in traffic with all the cars and buses. Seems like it’s being built to be built, with not much other thought put into it. A street car in the street is no more efficient than a bus at moving people. If pollution is the concern move more lines to electrical buses.

It is and always has been easy to get downtown from Capitol and First Hill with the existing bus lines.

You two have a connection to the internet. So, read…

Streetcars Are Making a Comeback, Thanks Largely to Obama
http://cleantechnica.com/2010/04/17/streetcars-are-making-a-

What a bunch of crap. We already had a perfectly fine historical car line and we took it out, spraypainted a bus green, and call it the “streetcar”.

Put the waterfront one back, then we can talk about adding other historical lines. Otherwise spend the money really improving, these crappy neighborhood “streetcars” do absolutely nothing to improve a neighborhood. The SLUT is crap.

You are stating an opinion. Do you have any facts?

I think sluts can come in handy from time to time.

Good lord, people, read about it first. It’s not for people strolling along Broadway, and it’s not for getting people from Cap Hill to downtown. The point of this line is to connect employees and residents in First Hill to the regional light rail line stations in the International District (5th/Jackson)and Capitol Hill (John/Broadway). Think Joe the janitor who lives in Tukwila and works at Harborview, or Sally the nurse who lives on First Hill and works at UW Medical Center. The extension to the north end of Broadway will just be a nice bonus — a way to connect more people to the light rail system.

Cant have it both ways. As a transportation initiative it is no more efficient than what already exists. When I’m on First hill, it’s MUCH faster to hop a bus or WALK (god forbid) downtown to the courthouse and catch transpo there than it will be to streetcar it to the ID or BWay. The earlier link about it improving the neighborhood, crap too. What bway needs to improve is POLICE. Same with downtown.

Fail fail fail. Nobody will ride this crappy line, nobody rides the slut. Building for the sake of building is a complete waste of time and money. Downtown is in ruin, even the lusty lady can’t make a buck and we’re spending money linking the ID and BWay? Have you people lost your minds? Walk some of the fat off, it feels good!

Lots of people ride the 60 (including me) to get from the north side of the hill to Harborview, etc. I’ll definitely ride it, I would prefer the street car over the bus. I used to live in Eastlake and the the slut was stupid because it only went from fred hutch to the back of pacific place… That was pointless. Needs to extend further/connect to other things to make sense, but I guess that’s the plan for the future. We can’t build the whole thing right now so it has to come in pieces.

This is a spirited thread. I don’t recall any of this passionate opposition over the past few years that this line, funded by sound transit and not the city, has been in the planning/community input stage. I hope all these vocal critics (and I’m assuming tax payers) were able to take the opportunity to express themselves in the multiple community outreach meetings and other such community involvement initiatives. Not that it makes any real difference at this late stage, but welcome to the conversation. I hope you are able to achieve some catharsis here.

Last minute opposition seems to be the tactic of our new mayor. Maybe he is posting on this blog under a different name.

I was a little surprised to see that the street car would share a lane with the cars, but… I guess the point is that it’s better than a bus because you know exactly where it’s going? And it’s a permanent installation, so development is more likely to grow around it?

Repeat, repeat – no need to go down town and back — faster, faster.