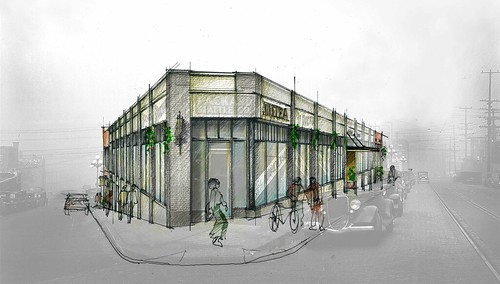 Since Terra Plata’s future at Melrose became cloudy in March 2010, there has been a great deal of speculation as to who would be able to replace this key tenant at 1531 Melrose.  CHS has learned that the future tenant will be a Mexican restaurant operated by the current co-owners of Ballard’s Bastille, Deming Maclise or James Weimann. We contacted Dunn & Hobbes, the co-developer to confirm. “We aren’t ready to announce any plans yet,” they told us.  We also contacted  Maclise and Weiman and received no response. This will be a marquee name that may equal Tamara Murphy in star power. In addition, Bastille was one of the first Seattle restaurants to feature a rooftop garden – a feature that Murphy had planned for Terra Plata.

Melrose Market is a testament to the idea that development (for density) and preservation can coexist.  Liz Dunn of Dunn & Hobbes has long been a proponent of prioritizing historic preservation in developing for urban, dense neighborhoods.  Her partner in the Melrose Market development, Scott Shapiro of Eagle Rock Ventures, has likewise received praise for his preservation-conscious renovation of the 1117 12th Avenue Building (home to Cafe Presse and Stumptown Coffee).  The vision is of an early 20th century arcade market (akin to pre-1971  “Les Halles” in Paris) with specialized vendors that sell food, flowers, clothes and music sharing an enclosed space with eateries and bars.

Dunn & Hobbes nabbed their anchor tenant for 1531 Melrose in March 2009, when Matthew Dillon agreed to relocate his critically acclaimed Sitka & Spruce from Eastlake to the Melrose Market.  Sitka & Spruce closed at its Eastlake location in December 2009 and is set to open Wednesday night at 5:30 pm.  Initially it will open only for dinner.  Beginning 6/15/10, Sitka & Spruce will be open for breakfast, lunch and dinner.

In addition to Sitka & Spruce, Dillon will open Bar Ferdinand at Melrose Market with Corson Building sommelier Marc Papineau and wine guy Jared Baily.  Bar Ferdinand will  offer wine-friendly foods such as fish, oysters, nuts, and olives for sale, in addition to serving them.  Expect it to open mid-summer 2010.

Vendors that have already opened at Melrose Market include The Calf & Kid, Marigold & Mint and the ampersand-challenged Rain Shadow Meats.  We asked Sheri LaVigne, the proprietress of Calf & Kid for an update on how her business is faring.  Here is her report:

Business has been great, opening weekend and week were full of people who’d been following the blog or twitter, and since then I have already got some “regulars” from the ‘hood.  Every day there is a good stream of new people just wandering by who are figuring out that we’re open or just discovering us, so it’s been great.

We also asked her when business is busiest and when she would advise neighbors to come by:

Saturday is our busiest day, so Fridays are a great time for people to come in.  I get all my deliveries for the weekend on Weds and Thurs so I am fully stocked by Friday and have my most comprehensive selection at that time.  Rain Shadow Meats is on a similar schedule, and Russ over there makes his terrines and pate’s during the week so those are available, also Marigold & Mint is carrying fresh vegetables Fri, Sat and Sunday.

We also checked in with Russell Flint of Rain Shadow Meats for an update on how his business is faring:

Things have been great! The neighborhood has been very receptive and thrilled. The busy times are Saturday and most evenings after people get off work. Sitka is opening this week and should draw lots of people in.

Rounding out the 1531 Melrose tenants, will be Homegrown – Sustainable Sandwich Shop.  CHS confirmed with Homegrown that they will open at the Melrose Market on 6/22/10.  They plan to use Calf & Kid cheeses and Rain Shadow’s meats in their sandwich offerings.

At 1525 Melrose, Sonic Boom Records has been open since December 2009 and reports that they have been able to achieve their goal of hosting more live music in the new space.  Co-owner Jason Hughes stated last year that this was one of the key reasons for Sonic Boom move from 15th Avenue: “Sonic Boom’s new store will have a permanent stage and we will be hosting more in-stores than we had in our previous location.”

Immediately adjacent at 1521 Melrose is Velouria, a clothing store, owned and operated by Hughes’s girlfriend Tes de Luna.  Like Sonic Boom, it has been in business at Melrose since December 2009.  In de Luna’s words, “Velouria is a boutique & gallery dedicated to featuring clothing and accessories made by independent designers that take their designs from start to finish without being mass-produced along the way”.

The only tenant that faces out on Minor, Still Liquor takes advantage of the less trafficked part of the development at 1524 minor, cultivating its speakeasy branding.  Co-owners Joshua Carrigan and Breckeen Anderson did all of the restoration and build out of the 1920s-era garage, and Still has won praise for its clean, modern space as much as for its cocktails.  Still Liquor has been open since January 2010.

Interesting take on Melrose Project and hte opinion on Bastille ill founded. Bastille will never outshine Brasa nor overshadow the “star power” of Tamara Murphy. The truth will always outweigh the “purple prose”. You should seek it!

It is not hard to outshine a restaurant that has already closed.

or should we say “urple prose”…

Oh thank you for the reminder that “star power” can still be purchased and doesn’t have to be earned. It really is wonderful that hipsters are willing to venture out to dear old Ballard to stay hip and it sure is great that these guys want to appease the rest of you by bringing it closer. You forgot to mention who actually makes Bastille work, the workers, not the owners, but isn’t that what really matters. Oh and 11 years of business deserves more respect than just a crude comment about outshining anything.

Scott Shapiro is an idiot! I hope he wakes up and learns the valued lesson of NOT burning bridges in this town. His business practices are SHADY to say the least. Go ahead and see the lease on one space and lie about the square footage – burn that bridge down moron! Tamara Murphy – you can do better! We love you!!!

If workers make Bastille successful wouldn’t workers have also made the non-existent Terra Plata (that you have never eaten in) work and not the Tamara you so dearly love for a restaurant that has not opened?

Past performance is not always a predictor of future success.

The last thing one could say about Scott Shapiro is that he is SHADY and he clearly is not an idiot. He cares about doing the right thing, cares about his tenants and has a moral rutter that seems to keep him always on the high road. Is it possible that your information is not completely accurate?

This commentor is probably one of the people who concluded the Cafe Vita owner could not have done anything wrong recently because he gives to charity.

Scott Shapiro and Liz Dunn’s historic preservation of a fine building is indeed a heralded virtue which we can all applaud. But it appears that they are using that virtue as a proud shield to cover up less than virtous actions in their dealings with Terra Plata. I am speaking of their blatent misrepresentation in writing and on blueprints of the space in which they leased to Terra Plata. Would you trust and support someone who was a supposed pillar of the urban community but who lied to prospective tenants because profit was more important than integrity?

Do we know for a fact that Tamara Murphy is not lying and has her own issues with integrity?

Please don’t answer that question if your response is she used to have a great restaurant and she has given to charity so she can do no wrong because I love her food.

…those are good reasons. But she’s done a lot more to deserve my respect and trust. There’s no skin off Scott’s and Liz’s backs – they’ll get their money – for all Tamara’s hard work and vision. Bastille will do quite well there – ANYONE would.

What goes around comes around.

So glad Bastille will not be opening here. The food and service at that Ballard restaurant is horrible.