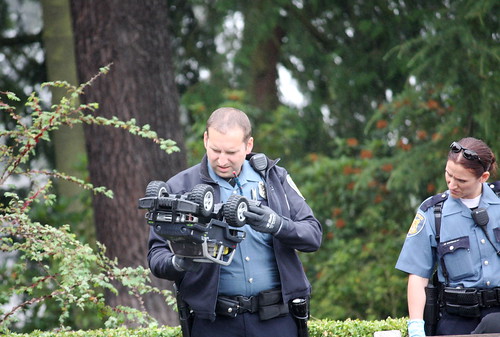 Monday, CHS reported from the scene as Seattle Police officers and the SPD bomb squad investigated and ‘rendered harmless’ suspicious items found in Volunteer Park. CHS was able to confirm that a man was arrested prior to the park and nearby 15th Ave E being put on lockdown but SPD tells us that he was taken into custody only for an outstanding warrant related to leaving community custody without permission. CHS has learned that the man has a lengthy criminal record and, among other crimes, was convicted for his part in dealing heroin to an undercover cop on Broadway in 2009.

SPD could not confirm or deny any connection between the man and the items the SPD bomb squad detonated within the park’s boundaries Monday afternoon one of which we were told was a bag full of wires found by a park employee. CHS has now been told that it appears that the items were not dangerous and were likely left behind by somebody staying or camping in the park. It is not known if the items belonged to the man who was arrested on the warrant — we reported on Monday that a remote control toy jeep was among the items taken into evidence as officers questioned the man on a Volunteer Park bench. It appears, at this point, that the man arrested for the warrant was simply in the wrong park at the wrong time.