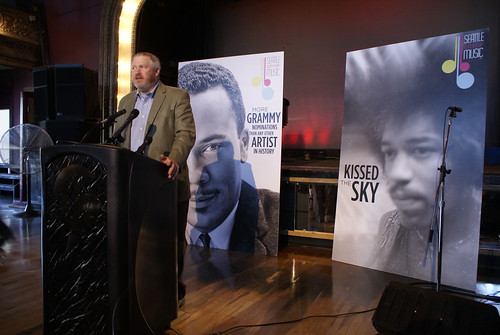 Mayor Mike McGinn introduced his eight point proposal to create a “safe and vibrant” nighttime economy through the Seattle Nightlife Initiative at the Century Ballroom on Capitol Hill Tuesday night. It was the public opening act of a show that is expected to last through the summer as City Hall floats its proposals, gathers feedback and figures out which elements are worth pushing through for the big finale: creating new laws in the city and changing state regulations.

McGinn referred to the plan’s inclusion of flexible liquor service hours  — staggered bar closing times — as one of the more “controversial” items on the list, which also includes security training requirements, precinct community outreach and, maybe the most important element of all, re-assessing the city’s late night transportation options.

Flexible service hours would mean bars would be allowed to serve liquor after 2 AM and would, ideally, avoid the 2 AM push out that public safety officials say contributes to violence and noise problems in the city. Some community members expressed concern over the change in bar hours during the question and answer session in the packed ballroom because the Washington State Liquor Control Board has not found any evidence that extended or flexible service hours dissuade people from becoming public nuisances.

“Having lots of people out on the street at 2 a.m. is not conducive to a peaceful evening,” said McGinn.

City councilman Nick Licata said he also supports flexible liquor service hours. Both he and McGinn expressed concern that law enforcement and neighborhood residents are sometimes overwhelmed at closing time when crowds of intoxicated people are asked to leave businesses and put out on sidewalks. The mayor’s office released a summary of its research on flexible service hours. We’ve attached the report to this post. 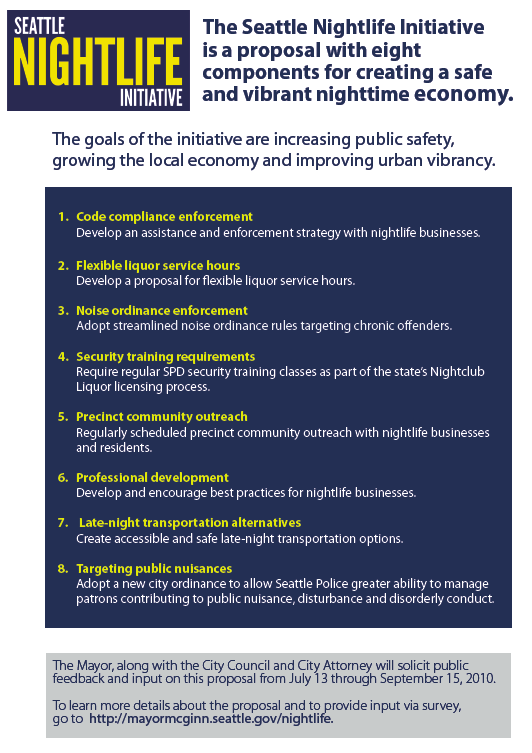 The city of Seattle would require support from the state Liquor Control Board for extended bar hours or staggered closing times.

The initiative also aims to change city ordinances to allow the Seattle Police Department to control disturbances and bar patrons who are a nuisance to the neighborhood after leaving nightlife establishments. The plan states:

Public nuisances and disturbances are difficult to deal with as they often cannot be directly controlled by establishments. Due to current city laws, police also have limited tools to deal with them. Because this undesirable behavior often occurs in a public setting late at night, it can affect an entire neighborhood and lead to negative perceptions of nightlife establishments (“they are promoting drunken behavior!”) and the police (“they are just ignoring the problem!”). 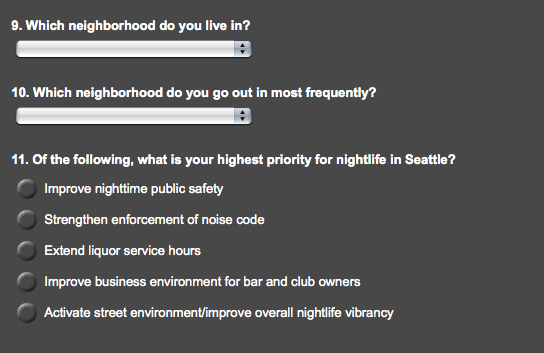 If ordinances were changed according to the current proposal, police officers would be allowed to warn individuals who were engaging in disorderly conduct and officers would issue tickets to those individuals who did not obey warnings. It’s not entirely clear how this differs from the current status of things other than making it more clear that it is SPD’s role to keep the party crowd on the street quiet.

The city is seeking feedback on the initiative through a 25-question online survey . Comments on the proposal will be open until September. According to Ainsley Close, a policy analyst in the mayor’s office, they are also hoping to discuss the proposal with the Capitol Hill Community Council in September to resolve and concerns the council might have over the program.

“The challenge is on us. How do we work together to create the community we want?” McGinn said. “We all have a stake in our city and our neighborhoods.” 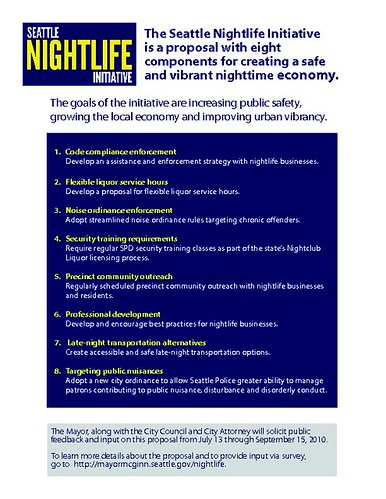 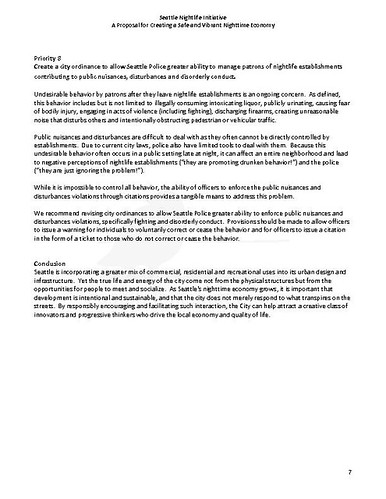 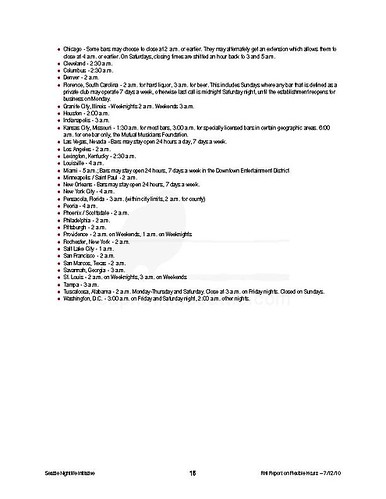 I was about to take the online survey, but hesitated as there is no information on the page about who gets our personal data and responses. Are these a matter of public record, etc.? Seems they should have some privacy information and assurance that they won’t share personal info on this page. Frankly, I don’t feel comfortable giving out my address and then responding that I “patronize nightlife businesses” several night a week.

Put – none – in all the required spaces.