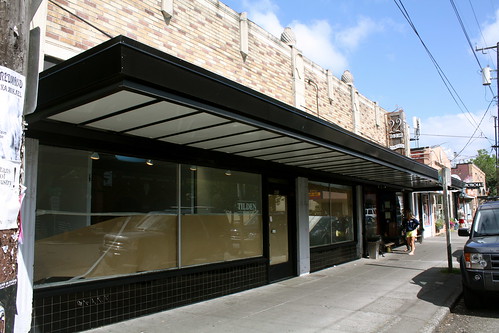 When we learned back in April that a mystery restaurant was destined for 401 15th Avenue East, the erstwhile home of Tilden (the ”difficult” for children store), we speculated as to what type of restaurant would move into such a large space (2660 sq ft)?

The filings reveal two permit requests — one for a “Cafe Vita” and one for a “Pizza Vita.” The permits document a combined project cost of around $125,000 to be pumped into rehabbing the former retail space. There is no project timeframe included in the permit applications and a visit to the former Tilden space this morning revealed only brown butcher paper falling from the windows inside.

The planned 15th Avenue location appears to follow a recent pattern of Vita expansions, whereby both pizza and coffee are dispensed at the same site.  In 2010, for example, joint pizza/coffee Vita locations were established in Pioneer Square and Portland, OR.  McConnell founded and owns Caffe Vita, Via Tribunali and co-owns Pike Street Fish Fry as well as Big Mario’s which is scheduled to open this Thursday next to the Vita on E. Pike and will be especially popular with night owls and party kids with its 4 AM closing time.  CHS has contacted McConnell and Vita for comment but has yet to receive a response.

15th Avenue is currently home to Palermo Pizza and Olympia Pizza which recently expanded into the former Sonic Boom space to open The Bar.  Coffee vendors on 15th Avenue include Victrola, Ladro and 15th Avenue Coffee and Tea.

UPDATE: Lest you feel too much pity for Victrola, they are undergoing an expansion of their own. Following its purchase by Whidbey Coffee Co. in 2008, Victrola opened up a Beacon Hill location and now they’re also pulling shots in South Lake Union. Here’s a lovely picture of the Victrola counter inside the new Amazon Kindle building. Via Twitter, Amazonian @kevinseattle tells us: “each new building will have a local (read: NOT SBUX) coffee shop. So far we also have a Vita and Umbria. Not sure who’s next.”

Too much coffee on 15th, seems like a cocky move, Vita.

do some people ever feel like they have enough money?

Can I assume that since starbucks was met with cries and protesters (tee-hee) when they rehabbed the space they’ve occupied on 15th Ave continuously since 1995 that Vita’s infiltration into the neighborhood will be similarly derided?

I’ll never understand the business model of cramming more of the same stuff into a small area.

So is Vita moving off Pike St.? The headline implies as such.

Well I’m kind of mixed on this. I’ve been waiting eagerly to find out what will open in Tilden’s old space as I frequent 15th fairly often. I like Caffe Vita and I like Via Tribunali, so odds are favorable I’ll like the Cafe/Pizza Vita as well. However, as pointed out, there are already two pizza joints up there and this is actually going to be right across the street from Palermo! Why not just throw some thai in while you’re at it?

Boo. The last thing 15th Ave needs is more coffee. Especially, mediocre coffee. Plus, pizza. Sheesh. The two things we really DON”T need. I had hoped for a deli or a hardware store. Something we actually want. I hope it doesn’t hurt the other long-standing coffee shops on 15th.

Not moving off Pike

Why don’t YOU step up to the plate and open a hardware store? Or is it more fun for you to sit in the background and complain that people aren’t doing what you want them to do. Selling screws and nails is not what most people think about when they dream of opening their own businesses, and working for themselves.

Epic fail. The best we can hope for is that McConnell blows a bunch of dough fixing up the place, then his redundant enterprise flops quickly to make room for something more interesting.

Tully’s entire business plan seems to be “across the street from any Starbuck’s that opens”.

Recall that Starbucks itself stole that plan on Robson Street in Vancouver and has 4 in 4 blocks (and 4 more on side-streets):

not to mention two next door to each other:
http://maps.google.com/maps?f=q&source=s_q&hl=en&q=Starbucks

Whose the we that needs a hardware store on 15th?

I’m glad to see others share my sentiment upon reading this — “What?! MORE coffee and pizza on 15th?!” As someone who lives in this part of Capitol Hill, I was really hoping for something different than the three-of-kinds we already have up there.

Well… at least it’s not another Thai place…

When Tildens left, my husband and I JOKED that it “should” be coffee or pizza. We live on 15th and had hoped for something like a book / magazine shop, a hardware store, etc. Something new.

But coffee AND pizza?!? This news is frankly appalling.

greek restaurant would have been sweet. or brew pub. or good mexican.

ugh…what a waste. I live nearby and was hopeful for something more interesting than another pizza and/or coffee shop. Well, you won’t be getting my business. LAME move!

hahahaha- this is totally ridiculous.

While pizza and coffee wouldn’t be my first choices for this spot (Chinese the likes of Eric’s or Alice’s in San Francisco please), I have to say that the existing pizza places on 15th are VERY mediocre (who the hell puts cheddar cheese on pizza, for god’s sake), so I’m looking forward to some better pizza, which I think we’ll get if Via Tribunali is indicative of what will end up at Vita 15th.

Darn, I wish 15th could be more like some of the other neighborhoods with empty store fronts and failed businesses up and down the streets. I was just sayin’ to my wife – wife, we sure need a yarn supply store on the Hill. Get real. He has a model that obviously works. As long as these companies can get the funding and keep the doors open – people in the neighborhood don’t have to go to South Center or Northgate for food and entertainment. Stop complaining. Go to the bank and get a loan and open your own stamp collecting emporium. See if you can make it work. I hope 401 15th is the best damn place west of the Mississippi.

That’s how it strikes you only shows you don’t know much about who lives in the neighborhood and what they want.

Agreed. Let’s see the protests for another chain coffee shop. Protesters, where are you?

yeah, ’cause you know it’s so EASY to get a bank loan and open up a new business…only established national and regional mini-chains can afford to pay high rents and get loans/financing to open new businesses in this economic climate.

what a boring move and not really a smart one considering:
1)There’s PLENTY of coffee AND pizza options on 15th.
2)This company already has outlets TEN BLOCKS away!

And, since everyone else is throwing their wish lists in, how about a good, AFFORDIBLE French bistro, or a Latin restaurant?

Really. That’s just what we need – another coffee shop on 15th. Not.

I disagree…I think Olympia Pizza is some of the best in the city. It’s all relative. We all have our own tastes (I generally prefer a thin-crusted Italian style pizza, but Olympia has won me over these past years.) So…kudos to Olympia.

Consider the business model of taking a cup of hot milk, adding an ounce of hot water that was pushed through some ground beans, and selling it for $3.

Victrola will always be the best

Wow. Such vitriol for suggesting a hardware store. The 12th Ave one is lacking. Even they know that. Anyway, the point is it would be nice to have more variety. That is all.

15th Ave is full of pizza and coffee, we don’t need any more. The city should deny this permit on that basis alone.

How about a NY style deli or diner? Or a Greek restaurant? A burrito stand. A steak house. A Cheesecake Factory. Anything, anything at all, would be preferable to yet another pizza or coffee shop.

Olympia Pizza is great. I wish they delivered.

On that note, this makes me even more sad that the early rumors that Tidbit was taking over the space turned out to be wrong.

oly pizza rocks and always has.

doesn’t suprise, however, they won’t last long. their coffee and pizza isn’t that good. really! have you had it lately?
the coffee is bland and boring. the pizza is soggy and raw in the center.
they’re just trying to crank out as many locations as possible to sell to a bigger company.

At least they aren’t opening a party supply/balloon/card store up in that spot. And I don’t think it’s fair to put Palermo in the same realm as Olympia – I have no clue how that place stays open. I went in there once (the only person in there) and it took over half an hour to get the food – there were 4 people working too.

If you’re crying for a hardware store, go to the Shop Rite – they have almost everything – and every now and then that awesome guy that works there wears a camo headband.

Are you the same person who predicted the demise of 15th Avenue Coffee and Tea before it opened?

We rarely ate in their restaurant but we ordered delivery from them all the time (delivery and eat-in menus are basically the same). Their pizza is good enough but we liked being able to order online from their entire menu (everything from hummus/pita, caesar salads, all sorts of pasta dishes and desserts). Few places on the Hill that deliver have that much variety.

here here on the books. a good used book store would be nice again. can never have too many of those.

though I don’t know how successful it’d be.

I’m still waiting for a decent Indian Restaurant on the south-east-ish part of the hill. We’re still walking all the way down to Mirch Masala to get decent food… Chutneys on 15th has the worst Indian food I’ve ever eaten in Seattle (no exaggeration). We actually left without eating more than 10% of our food. So please… amid the flurry of new pizza joints, distilleries and coffee bars, if anyone wants to open a decent Indian food place on 15th, I will be your best customer. :-)

oh yaaa! A good mexican place with authentic tacos would be great! I’m still hoping for a taco truck to open up close to where I’m at… but more towards 15th rather than the CD… someplace I can walk to after dark without getting maced and robbed for my taco money. hehe.

There’s also a shitton of pizza on 15th, too. They’ll be directly across from Palermo.