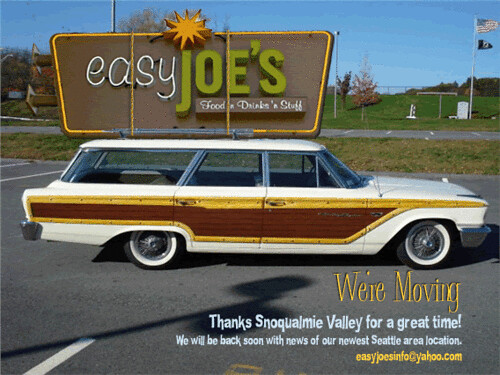 When CHS advertiser Tidbit Bistro announced that they were relocating from their North Capitol Hill location to a more centrally located one on on Capitol Hill, speculation began as to who would take over the space.  A live music venture calling itself The Alcove was initially slated to replace Tidbit at 2359 10th Avenue East.  However, due to the loss of a major financial backer, The Alcove was unable to launch.  We can now confirm that  Easy Joe’s Restaurant will soon occupy the space: they are hoping to open in mid or late September.

Where  Tidbit Bistro billed itself as where Madrid Meets Napoli on Capitol Hill, Easy Joe’s Restaurant will offer diners classic American fare such as burgers and fries and beef stroganoff.  Derek Schaubroeck and Bart Smith have collaborated on the concept and explain it as follows:

While not a theme restaurant in the strict sense, Easy Joe’s does give a nostalgic nod to another time. Derek and Bart are both products of late 60’s, early 70’s middle-American suburbia and wanted to celebrate the unique popular culture of that era. Touches like fun patterned wall paper, colorful vinyl tablecloths, and even a poster of Joe Namath in the bar are some of the touches that evoke those simpler times. But this light and casual feel does not come without attention to detail. For instance, the wallpaper is from Germany, the tablecloths are custom made in England and the retro pendant lamps will be special ordered.

Schaubroeck and Smith operated an Easy Joe’s in North Bend between 2008 and 2010, before deciding to relocate it to Seattle.  In addition, Schaubroeck and his wife own and manage Nicolino’s, an italian trattoria in Issaquah.

Oh THANK GOD for the German wallpaper, I would have ~completely~ refused to go there without it!

Great, another mini-chain from the super creative Eastside coming on over to Capitol Hill to sell us on schlock. Just like with the Bellevue-based owners of Barrio, more cutesy suburban dreck for us city slickers. I give “Easy Joe’s” a year to realize if they couldn’t make it in Issaquah, they ain’t likely to succeed in our ‘hood.

Love the food at Barrio- the Bel-Square mall feel is horrid.

I like to sit in the back, by the kitchen, then, at least if feels a bit real.

Big space, nothing says C. Hill at all, too bad. Just feels fixed and stale, and vapid.

Let us begin by saying no one spoke to us about Easy Joe’s and this article seems to be culled from dated, irrelevant, promotional material. We’re neither suburban drones (I lived my adult life in New York City and work downtown, and Derek lives in Seattle) nor are we some tepid theme-chain. We’re just two nice guys looking to open a fun neighborhood joint with tasty, simple food and a full bar. So please at least drop by, check us out and say hi … then you can start the hatin’ :)

Just to clarify, nobody ‘spoke’ but CHS did contact Bart by e-mail and was graciously provided information used in this article well before it was posted. Don’t want people to get the impression we posted this without contact or without clarity that the information was on the record.

I’ve asked Bart to provide more information about Easy Joe’s that we’ll share as soon we can.

Settle down Tremulous…like the owners said, come on by and try it before you publically blast them on a website.

I live on the hill and love the feel of it…but at the same time, I am open to trying new things and don’t simply dismiss them because they have something to do with the “hated” Eastside or are a “mini-chain”. So…do you hate on Dick’s burgers? They are a LOCAL mini-chain.

Oh, also…Barrio started on Capitol Hill and then moved to Bellevue. And I am pretty sure they are based in Seattle.

Not trying to pick a fight but just saying man…

Well even though I am concerned your Business model may fail, I am relieved that the Nightclub is not going in with all the drive by shootings, drunk drivers, and expanded all night hours Mayor McGinn is proposing to pay back his political supporters.I live nearby and was a regular at Tidbit and the fabulous Huiyona below that also closed. It is hard to make it in the restauant business even with good food. Remember that Johnny Rocket only lasted for a few months on Broadway a number of years ago. Dick’s has lasted for over 50 years for a good reason. Try looking at Lunch Box Laboratory in Ballard and Red Mill in Greenwood for some ideas about what works. Good Luck, we need a good Restaurant at this location and I will give you a try.

Thanks for the words of encouragement, Allan. We look forward to meeting you!

I live in the neighborhood, and I for one am very much looking forward to the opening of Easy Joe’s! I have long hoped for something new in the area (i.e., not italian), and simple tasty food (plus weekend breakfast and a full bar!) sounds perfect.

Welcome to the neighborhood, Bart and Derek. I wish you luck, and can’t wait til you open!

Its about time we got rid of those chic restaurants on that corner and had a place where real people can eat real food. Don’t care about the wallpaper (seems like an expensive waste of money)but I’m looking forward to a menu that I can actually understand. Unfortunately, they have a kid’s menu, which will attract parents with screaming children, which means I’ll look longingly at the menu but walk away because of the obnoxious clientel. I’m not sure what the pretentious snobs on Capital Hill have against the ‘burbs.

Dick,
Judging from your intolerant view regarding children and city dwellers and your stated ignorance about food I can understand that you don’t even know how to spell Capitol (you said Capital), if you represent Bellevue then I must conclude that you do come from a Cultural Wasteland.
an obnoxious pretentious snob parent

I live in the neighborhood and admit I was hoping for a brewpub/ale house (like the Hilltop Ale House in QA) or some super Thai (like Naam in Madrona), however I’ll give these guys a shot.

Better a local “chain” than another quiznos.

“We’re neither suburban drones (I lived my adult life in New York City and work downtown, and Derek lives in Seattle) nor are we some tepid theme-chain.”

Don’t worry, it’s mostly a few loudmouths, I didn’t get that feel from the materials.

“Its about time we got rid of those chic restaurants on that corner and had a place where real people can eat real food. Don’t care about the wallpaper (seems like an expensive waste of money)but I’m looking forward to a menu that I can actually understand”

I can’t complain about nice, cheap eateries, though.

I’m not sure why the CHS blog (prematurely) started off with a bad review of Easy Joe’s, months before they opened… But I can say the CHS-bloggerati were off the mark completely in their review.

I live one block from EJ’s and stopped by last night. The place is a welcome addition to the neighbourhood andtheyve got off on the right foot with people. Good food, bright friendly decor, family friendly venue AND they have a full bar. Much cleaner and welcoming than other neighbourhood ‘joints’, and a place I can grab a bite with buddies or my family.

Don’t knock it until you’ve tried it. Easy Joes is great and this local gives it two thumbs up for finally understanding that food doesn’t have to be hipster gourmet to be appreciated by people in the hood. It’s great to see local entrepreneurs making an investment in our neighbourhood spot.