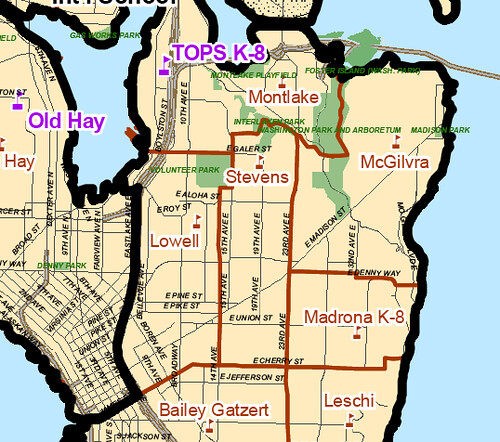 It’s the end of the first week of school for Capitol Hill kids in Seattle public schools. Now that the students have found their lockers, settled into their homerooms and memorized class schedules we can start to look ahead at what the rest of the year holds for students in the central area (Capitol Hill and the Central District) of the district. Kay Smith-Blum, the district five representative on the school board, took some time to speak with CHS about what area students and parents can expect.

This fall, area high schools are no longer application based, meaning students will now attend the high school in their neighborhood by default rather than applying to go to the high school of their choice. At a hyperlocal level, this mean every eighth grader at Washington and Hamilton Middle Schools will be guaranteed seats at Garfield High School for their ninth grade year. CHS covered the changes to the assignment system for Seattle Public Schools last fall.

“The preference has now shifted back to the neighborhood rather than resident,” Smith-Blum said.

However, this means that more than 100 extra students will be attending Garfield this year and there are challenges to hosting them, more crowded classrooms, longer lines at lunch, but the change in policy could also mean greater academic equality in area schools.

Previously, Garfield was the only high school in the area where a full selection of advanced placement classes were offered but, according to Smith-Blum, the majority of these classes will be offered in every school.

By the way, the Alliance For Education awarded Garfield principal Ted Howard a $50,000 grant for outstanding leadership in March, which he can spend how he sees fit within the school.

At the primary school level, there are no major changes but some elementary schools like Lowell and Montlake are operating just under capacity this year and Seattle schools says it does not anticipate a major influx of new elementary school students to enter the system for another three years. Stevens Elementary, in the meantime, has a new interim principal.

If there is a major influx of kindergartners in 2013 and more space is needed for students, there is a clause in the district’s contract with the Hamlin Robinson school currently occupying the T.T. Minor building that would allow Seattle Public Schools to take the facility back in the third year.

But Smith-Blum says population trends will be difficult to predict with any conviction until new census data is released next year.

“When you haven’t had a census in ten years and you’re working at the tail end of really old census information, it becomes almost impossible to make predictions,” Smith-Blum said. “We think we won’t need T.T. Minor for three to five years but it could be we need it sooner. The good news is that we have a couple schools that are not to capacity.”

Other goals in the near future for the area include putting a wellness clinic on the Meany School campus that is home to the NOVA High School program and the Secondary Bilingual Orientation Center and the district is exploring possibilities to create more opportunities for students to have proficiency in a foreign language at a young age.

Smith-Blum will be at 23rd Ave’s Douglass-Truth Library September 25th at 10 AM to talk with area parents about the year in Seattle schools.

“At the primary school level, there are no major changes.”

Not true. A new (or “interim”) principal is a significant change. At Stevens, parents and staff are wondering how the district plans to name a permanent principal. Another big change: because of new district-wide enrollment boundaries and policies, Stevens this year had to add a kindergarten class (for a total of 3). The building won’t have enough classrooms, etc. if this enrollment boost continues in future years.

Still a great school, but the year is starting with big changes and some uncertainty.

If Montlake is under capacity then why did my 2nd grader says there’s not enough squares on the carpet for all the kids to sit? And why did kindergarten and first grade have to be combined to spread kids to under 30 per class?
That school is so over capacity and understaffed and worn out that it feels like some crazy depression time capsule in the middle of a fancy neighborhood next to a giant university near a floating bridge full of audis and beamers trying to get from Redmond to Seattle for $200 dinners.

It looks like the Garfield principal will be able to use the money to hire more teachers.

“At a hyperlocal level, this mean every eighth grader at Washington and Hamilton Middle Schools will be guaranteed seats at Garfield High School for their ninth grade year.”

Perhaps the writer was thinking of the APP program, which is the program for kids who are achieving at an advanced level of curriculum. In elementary school, APP kids who live south of the ship canal go to Thurgood Marshall, while kids who live north of the canal go to Lowell. For middle school, the TM kids go to Washington, while the Lowell kids go to Hamilton. For high school, all APP kids, from both Washington and Hamilton, go to Garfield.