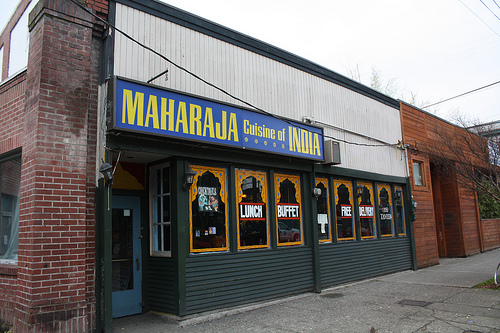 This tip just in — the Maharaja is shutting down on East Pike:

Bartender friend there just called me. Landlord is raising the rent too high on the 1st. Kitchen open till 5, then that’s it.

Thanks to tipster A Sad Fuck for that. Quick call to Maharaja confirms. We’re told they plan to re-open in the New Year. In Pioneer Square. Surely, karmic justice for the Hill’s acquisition of Elliott Bay Book Co.

We reported the Maharaja was for sale at one point in 2010. Most recently, we reported on a rather rough and tumble brawl inside the watering hole.

Meanwhile, on Broadway, we feared some sort of Hill Indian food apocalypse when we saw a listing with the state liquor board saying New India Express had discontinued its liquor license. But no worries, NIE tells us — they’re not going anywhere and they still are serving wine and beer. They transitioned the license recently and the discontinuance is related to the old license, not the new one.

I just walked by this place today… stopped and looked at it. Is it good? Apparently so from the emotion in this writeup. I wanna try it.

Yes, it’s sad when a business closes up shop, but are there really that many Maharaja fans? The food was atrocious and the place was dirty. I personally saw a roach there on one of my very few visits, (my last actually) and know many people who also encountered the creepy crawlies. And, I think the men’s room must have been imported from Calcutta.

But, it’s alarming and bizarre that the landlords are raising the rent considering the large number of commercial vacancies on the Hill.

Unless, they have another tenant already lined up…

Only ever had pakoras there once. They were excellent but I haven’t had pakoras in a long time and I was very hungry, there were big squeeze bottles of sauce and I was very happy. However, I always go there for the bar! Met many a friend there and it’s always very chill with just enough personality to make it interesting. Thankfully, I missed the brawl mentioned in the post. Going there now for a memorial drink!

I guess some people liked the place for the bar, but I tended to avoid it when it became known for violence. But as a restaurant? Please. The place was disgusting. I’ve been working in kitchens for over half my life and I’ve never seen one as dirty as the Raj. It will not be missed.

Can’t say I will miss this place.
I would have to give my vote to Mirch Masala for best Indian on the hill.
As for the India Express, nothing says “come eat here” like reading a menu board on top of a trash bin!

was disgusting. I imagine that there was a freeway of bugs transporting germs from the urinal to the food.

My last meal there (over two years ago) wasn’t horrible, but the setting, service and experience was. Never went back. Always sensed something was not quite what it appeared at that place. Interpret that how you will.

I was there once when they were closed down by the health department .. I never went back

trying to buy up that whole block to bulldoze for years

Good riddance – that place was filthy!

I am going to miss the Maj SO MUCH. Where the hell else am I going to find a pint of vodka for $5? At least my liver will get a break, I guess.

The place is a shithole frequented by thugs and fat girls. ZGood bye crappy food and A-holes.

See ya Mah…you will not be missed

They lost me when they discontinued their buffet, but didn’t take down the signs about it.
We still have the Mirch Masala, so no great loss.

The food sucks, the place is a pigsty and the lowlife clockers who hang out in front will have to leave. So much win!

So, you don’t eat there?

I used to bartend at the Raj, and I can testify that while there are many great people who frequented the place, there were MORE awful people who did and ruined it for the rest.

Weird management. Restaurant was always dirty, and not well staffed. And not enough security to protect helpless bartenders from the violence.
(I’ve seen some serious shit go down here)

I guess that’s what happens when you offer $3 wells with a free appetizer right next to the war room? ::shrug:: Those were the days.

is it always sad that a business closes? NO.

it just isn’t. i’m not going to mourn over this place. it sucked. it went out of biz for a reason.

i just don’t think it is always sad when a business closes up shop.

but we don’t need a memorial service for every biz that closes. super serious.

Just like the undie shop. It went out of business for a reason.

No great loss to the restaurant scene. Indian food on the hill? Go to Annapurna, Mirch Masala, or Chutney’s.

I’ll be missing their insanely cheap drinks.
Other than that, good riddance. I’m one of the apparently many that’s seen a rat scurry across the floor there. After I saw that, I didn’t stop going there, just stopped eating the food. The place was a grungy shit hole. Lets hope something better moves in.
But please keep cheap drinks on the menu.