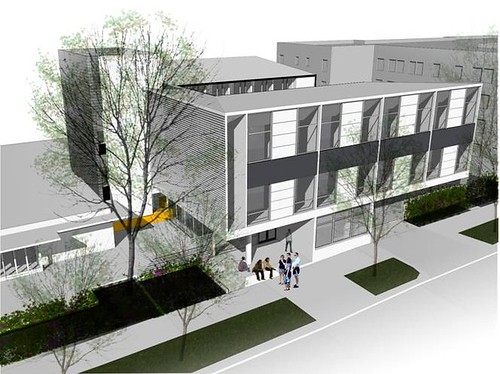 Following key approvals of permits by the city last week, East Madison is about to see the start of its third major active construction project. An important provider of social services throughout the region, Capitol Hill’s Jewish Family Service this month start work on a $3.6 million project to build a 19,000 square foot expansion on the parking lot adjacent to their current offices at 1601 16th Ave.

The three-story structure will have ground level parking and two levels of office and meeting space above. JFS hopes to receive LEED Silver for the Weistein A|U-designed project. The target for completion is early 2012. In the meantime, JFS is directing staff, volunteers and visitors to use nearby paid parking lots, carpool, or take the bus to ease the parking crunch as its lot is taken over by construction for the rest of the year.

JFS’s range of programs including addiction counseling, refugee assistance, and food bank services. In 2009 it served over 11,000 people. Plans to expand were initially released in 2007 but as the recession took hold, construction was delayed and the size of the building was scaled back.

Now, the project will join major construction underway at 13th and Madison and 19th and Madison as the area will be busy with trucks for the next months. A fourth Madison project, the Bullitt Foundation’s Cascadia Center — the highest and highest profile of the bunch — is stalled pending an appeal to the Department of Planning and Development.

WOW! That looks to close to those apartments and CH residents! Not good! I hope those aren’t bedroom windows…

I don’t think Weinstein cares about the Hill, just look at his last project, “The Pearl”. Blah!