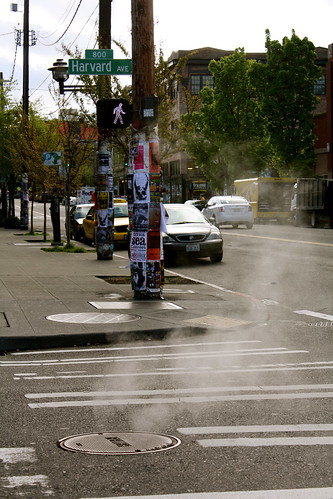 The city is currently studying the feasibility of district energy systems in several locations around the city, including near the Capitol Hill light rail station. If installed, the systems would provide heating to area buildings more efficiently by allowing them to pull from a shared energy source.

To put it simply, a district energy system is a series of underground pipes carrying energy, typically in the form of steam or hot water, that buildings can pull from for their heating needs. Larger systems, such as Seattle Steam in downtown, produce energy through more traditional methods, like burning natural gas or, more recently, biomass. Seattle Steam has been heating buildings downtown for over 100 years, and currently heats around 200 buildings including Seattle Central, Swedish Hospital, Virginia Mason and Harborview. Ever wonder what causes all that steam at Harvard and Pike? That’s Seattle Steam.

The system being considered for Capitol Hill, however, would likely be a smaller endeavor. Using hot water instead of steam would allow the system to use lower-grade energy sources, like heat recapture or geothermal, said Joshua Curtis of Seattle’s Office of Sustainability and Environment. One advantage of district energy is that a diversity of heating methods can be used.

“Think of district energy as a platform,” he said. “Pipes would maintain a hot water temperature that would basically make a loop around a defined area.” The transit oriented development (TOD) near the Capitol Hill light rail station could provide an opportunity to install such a system.

AEI, the Madison, Wis. firm the city has hired to complete the studies, is also looking at other areas, including Yesler Terrace, Mount Baker, Pioneer Square and South Lake Union.

If installed, the buildings plugged into the system could greatly reduce their carbon footprint and heating costs. Systems often combine heat and electricity generation, which is even more energy efficient. However, creation of a district energy system would require a sizable initial investment.

Even if Capitol Hill isn’t selected for the program, one of the area’s largest institutions is already planning a major efficiency overhaul. Seattle Central announced recently it had received a significant grant to help pay for a $4.7 million overhaul of its infrastructure. The energy efficiency project will replace outdated HVAC equipment, retrofit or replace inefficient lighting, and upgrade the “energy management system” in multiple campus buildings. In addition, water conservation measures will be implemented to save both water and energy for water heating:

Seattle Central Community College has received a $2 million grant for an energy conservation project that is expected to provide the college with nearly $200,000 in annual energy and maintenance related savings. Partly funded by a State Jobs Act for Public K-12 and Higher Education Institutions grant, the project provides for a strategic investment in college facilities, infrastructure repairs and upgrades.

That’s an interesting idea. At first glance it would seem like it’d make sense to tie the new buildings into the existing steam system, I mean it’s there already after all, but I imagine someone with a far greater grasp of the project than myself has seen a reason why that might not be the best answer. Either way, I’ll be interested to see what winds up happening with this.

I would guess that there’s a limited distance you can efficiently move steam; you have to worry about maintaining pressure and also about heat loss, and affordable insulation is only so good.

But that’s kind of interesting itself, if it makes steam heat naturally a neighborhood-sized, long-term efficiency investment. That would reinforce the TOD by making it cheaper to heat in the steam district, which should balance the cost of being in the dense TOD (just as lower car needs do).

Per seattle steams website, Seattle Central is already a customer of Seattle Steam. http://www.seattlesteam.com/service-area-map.htm I’m guessing that the improvements are to portions of their campus that aren’t served by district steam?