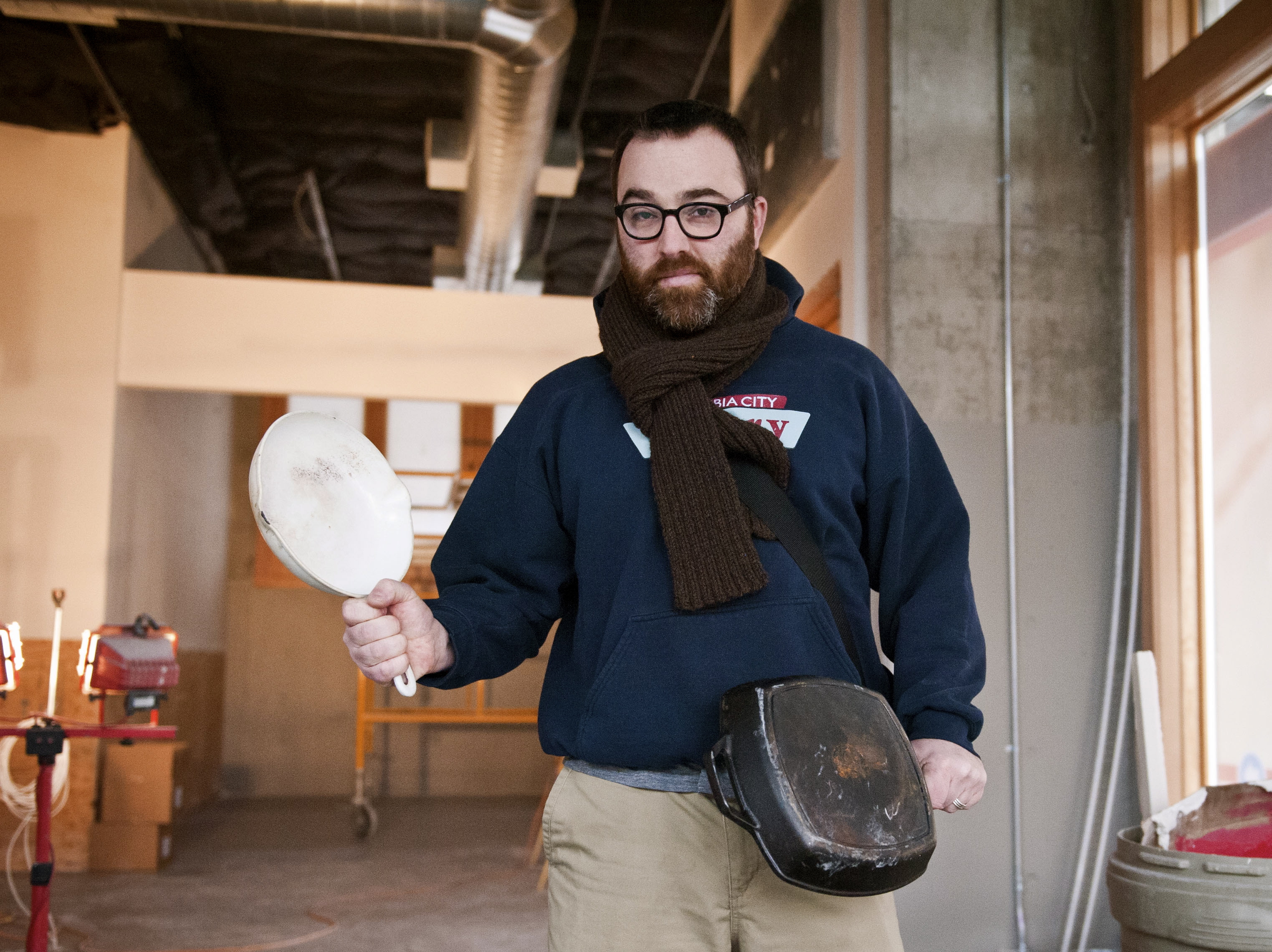 It’s been one hell of a road trip for the leader of Seattle’s street food revolution and, if his plans for Skillet Diner are any indication, Josh Henderson is ready to pull the rig over for the night and put down some neighborhood roots.

“This is about having a stable environment for our brand and our offerings,” Henderson said as he gave CHS a tour of the in-progress creation of Skillet’s new diner in the southwest corner of the Chloe building’s retail space.

“We want to be part of the neighborhood — in the morning, in the afternoon and at night.”

The new Skillet space is nowhere near complete but the first fixed-place restaurant created by Henderson’s high-flying company is coming together quickly. Opening day should come sometime in April. Or maybe it will be opening morning.

“We’ll have a stand-up espresso bar for people to start their day with,” Henderson said. Skillet will open every morning at 7 AM and Henderson would like nothing more than a busy crowd of locals standing at the bar, getting their caffeine and morning news fix before heading into the neighborhood to begin their workdays.

Or maybe it will be an opening night. Henderson plans to keep Skillet open to midnight most nights and 2 AM on the weekends. After last call, he hopes the Pike/Pine party crowd will make a tradition of the short hike over to 14th and Union to visit Skillet’s poutinery walk-up.

Inside the under-construction diner, between conversations about important things like drink tray placement, Henderson shows off pieces of the materials that will be used on the restaurant’s immense counter and comfy booths. 1979 Frigidaire green dominates. It’s a good color for Skillet — familiar, traditional but in a new place and in a new way. Skillet’s street menu has been built the same way. Henderson says the only difference in the diner will be scale — “The menu is going to be big!” — and technical ambition. Outside the confines of the Airstream, Skillet’s crew will have more room to roam. Seattle foodies got a preview last fall as Henderson alpha tested his expanded menu at the Mt. Baker Community Club.

Henderson, though, hopes to keep things close to home. “I’d love for us to be a neighborhood place and filled with people who live here,” he said. He picked up two of the skillets given to him in a drive being promoted in Skillet’s newsletter. Give Skillet your pan and you’ll get a $40 gift certificate. The donations, Henderson says, will be displayed on the east wall of the diner by the dozens — a wall of skillets.

There are still weeks of work before that wall is unveiled, however. Skillet’s street crew is still on the road — across the street from the construction every Wednesday for lunch, by the way. And even when the permanent space is open, Skillet’s road trip won’t really end. “A lot of this will be a nod to our past,” Henderson said. “We just needed space.” 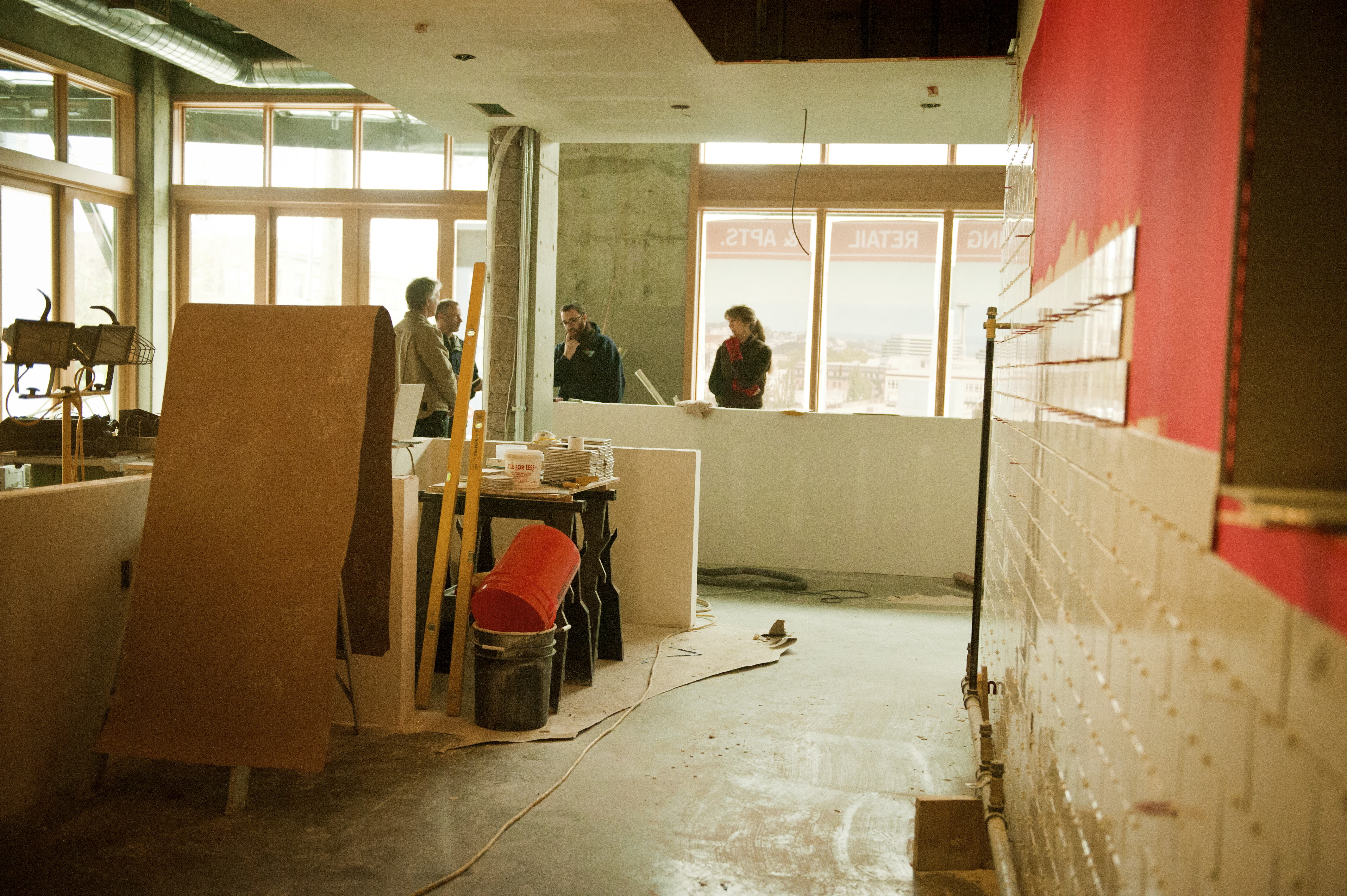 I can’t wait though- I work over in Fremont and our office loves skillet days!

Pettirosso on 11th makes a great breakfast sandwich, though I don’t remember if an English muffin is a bread option. I’m excited about Skillet coming to the hill, too, though.

Pork belly on a waffle. Like they used to do.

Looking forward to this…though I hope I won’t be smelling poutine while working out at the gym next door. Walking past Piecora’s before and after every workout is hard enough…

I’m all for more independent businesses in the neighbor hood. But “a stable environment for [their] brand and [their] offerings” isn’t particularly enticing. Why would anyone reading this care about their “brand”? I think if I had interviewed Mr. Henderson, I would have responded, “By `brand’ you mean the name and logo you stamp on stuff you sell, right? Why does that need a stable environment? And by `offerings’ you mean food and drink, right?”

So much wrong with this posting, though I wouldn’t be so rude as to suggest that Phil sounds like a tool. Just a bit uninformed.

Josh came across, to me, as a smart businessman protecting his brand. Yes, more than widgets are branded.

Every business big or small needs a brand.

Phil, you even have a brand…

Their brand is mediocre. I’m happy they have a jar of jelly with bacon in it, wow amazing. I sincerely hope the food at a proper restaurant is better than the hyped up food they served in the trailer. So much good food in Seattle and most of it gets very little ink. Just venting. PR people gotta get paid to pull the wool over the sheeples eyes suppose.

I don’t think Phil was arguing whether Skillet does or does not need/have a brand. I think he was making the point that it doesn’t sound very passionate for a chef and small business owner to be talking about it like he’s sitting at a shareholder meeting or something.
I wish them well, but I won’t be dining there. Personally, I was turned off to the “brand” by his arrogant reaction when he got caught flaunting the health codes a couple years ago.

KB: Thank you. That summarizes my feelings rather well, though I wasn’t describing a lack of expression of passion so much as an abundance of bullshit.

And I, too, was turned off by Skillet’s (Josh’s? I forgot) dismissive attitude toward food safety when one of the trucks was found to be in violation last year. Yuck.

But most potential Skillet customers won’t know the owner speaks in PR buzzwords when interviewed (and as Alan’s “he sounds like a smart businessman” comment indicates, some people eat that up, so maybe Josh was smartly leveraging synergies or something), most won’t know about the “handwashing schmandwashing” attitude, fewer care about it, and man oh man, I’m happy there’s not a chain restaurant going in there. I’ll suck it up and brave the dirty hipster food before I spend a dime at Panera Bread Factory and the like.

I hope they have at least one good vegan choice on the burger and brunch menus (unlike the Skillet truck). I live on the same block and there are tons of vegetarian/vegans here, and we’re known for steering our groups of friends to restaurants that do cater to veg’ns in the neighborhood (which is most of them).

Absolutely agree! My friends love getting breakfast but there has to be a decent option for vegetarians and vegans… more than decent. at least one delicious dish for us veggies.
Love lindas with thier tofu options and veggie sausage.
Glo’s breakfast
Pho (comes veggie)
and crepes at 611.

man…. a chaco canyon would sure be nice in capitol hill!

I think we have enough vegan options on Capitol Hill. Don’t ruin it for the rest of us…