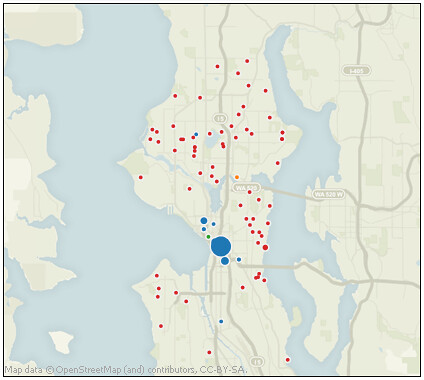 As you may have read, a major Capitol Hill transportation agency is swapping out its aging, inefficient vehicles for a new electric fleet. We call this agency You & I. Utilizing data from the City of Seattle’s permitting process, here is a look at where on the Hill and across the city electric car infrastructure has been installed first. It reveals areas of early adoption — and areas in the city where there are holes. The numbers also reveal a major uptick underway thanks to tax incentives, the promise of a $3 fill-up when a tank of gas costs $50 and the desire to make a change.

CHS has reported on the early rumbles of creating electric car charging infrastructure on Capitol Hill. This federally backed company told us about the difficulty it has encountered finding parking garages to work with in our relatively parking garage-light area of the city. These developers asked for community feedback on whether there was demand for charging stations in their parking facility. This developer is considering installing stations as it plans the largest new parking structure on the Hill even as it faces prospect of tax incentives ending before it could take advantage of the programs. The challenge of the change is the cars must have a place to charge. With standard stations, it’s a seven-hour process. Though it is industry-produced documentation, this Nissan FAQ about their electric vehicle is plainly honest about the need for more infrastructure. Most of the companies support programs that lower the cost of installing a home station and recommend a professional installation:

An artefact of the technical nature of these stations are the DPD permits that show where — and when — the units have been approved to be installed across the city of Seattle. This map shows where on the Hill your neighbors have lead the way. Red dots are single family homes, blue are commercial installations. You’ll notice a distinct lack of green and orange dots. Mutli-family buildings haven’t, yet, gone back and worked to add the infrastructure and the new wave of construction hitting the Hill hasn’t yet arrived at the point in construction where that kind of granular element has been decided on. Schools and government also trail — though that massive blue dot downtown is the Seattle Muni Tower garage, a commercial fixture permitted for 26 chargers to be utilized by employees and visitors to the various government offices in the area.

You can drag the date slider back to July 2010, the first month data on the electric charging station permits is available, and play the history of the approvals. April 2011 appears to be the month electric cars “broke” in Seattle — this dataset only presents a portion of the month. To zoom the map, look for the dark arrow at the bottom of the graphic and select zoom.

As for the Hill, the single-family home installations correlate, roughly, with some of the higher real estate values on the Hill but there’s more going on toward the Central District than the central single family area of Capitol Hill. Kudos, Madrona. Meanwhile, the empty swath through the middle separating our single-family home adopters from the commercial activity downtown looks like an electric car canyon. Anybody seeking to go electric in the densest part of the Hill will face some infrastructure challenges. You could always try loading this map and knocking on a few doors in northeast Capitol Hill when you need a charge.

As you can see from this map there is more that the rebates from the Automobile manfacturers that are motivating the public to purchase electric vehicles.
Maybe gas prices?