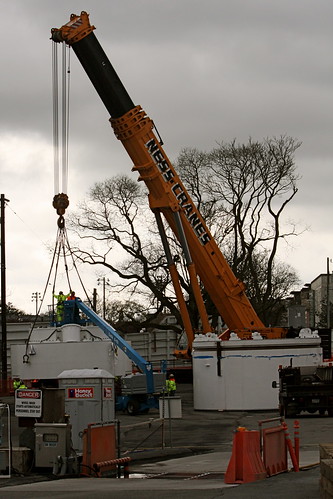 The enormous machine that will bore twin tunnels from Broadway to downtown has arrived at the Capitol Hill light rail construction site. The tunnel boring machine — nicknamed Brenda — is a key component for the next phase of constructing the $1.9 billion U-Link light rail line between downtown Seattle and the University of Washington via the Capitol Hill stop.

CHS stopped by the Broadway station site Monday morning as the giant pieces of machinery were being loaded off their trailers. Lowering them into the pit is likely to be an all-day endeavour — swing by the site or check out the Sound Transit Web cam and you might be lucky enough to see the crane in action.

According to Sound Transit, the machine will be launched from the Capitol Hill site sometime after June and will bore the first tunnel between Broadway and the removal shaft constructed off Pine near the Paramount Theater (where these cool old Seattle artifacts were unearthed). The machinery will then be disassembled and trucked back to Capitol Hill to bore a second tunnel. Meanwhile, a twin set of tunnel boring machines will make their way from the University of Washington to Broadway. You can see more details on that and the routes for the tunneling here.

Later this week,  you can meet with ST reps on April 20th at Broadway and Denny’s Peet’s Coffee to discuss the project and Broadway station construction. 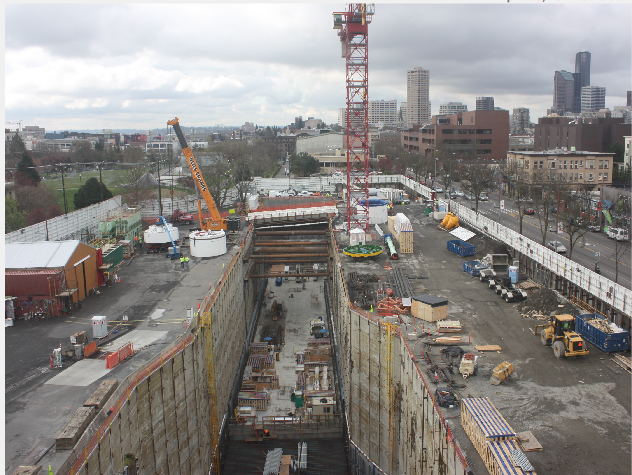 From the ST Web cam, the tunnel boring machinery is to the upper left of the pit.

I wish they would pick times that people with jobs could easily attend for these coffees.

The people from ST have day jobs too.

is there a link to that webcam? i’d love to watch it.

I wish they had named the two machines from the UDist. Laverne & Shirley.

The link is there in the story. Perhaps not when you read it, but certainly now.

yup, it’s been there since publish. But here you go
http://capitolhillseattle.com/lightrail

I managed to catch them moving some of this huge hardware down 12th Ave around 2:00 am a couple of nights ago. It was pretty awesome!

Why are tunnel boring machines always named after women? I guess that’s ironic, like Curly from The Three Stooges, who had no hair.