Early work on the streetcar that will connect Broadway to Pioneer Square by way of First Hill could begin as early as August depending on how the final sign-off on costs go with the Seattle City Council. Here’s an update on the streetcar line based on a presentation shared with the Capitol Hill Community Council late last month.

The full presentation is embedded below. We’ve pulled out some highlights and have included a few notes from city planners.

Here’s the final route map for the line that, for now, will not connect to the city’s existing streetcar line downtown. 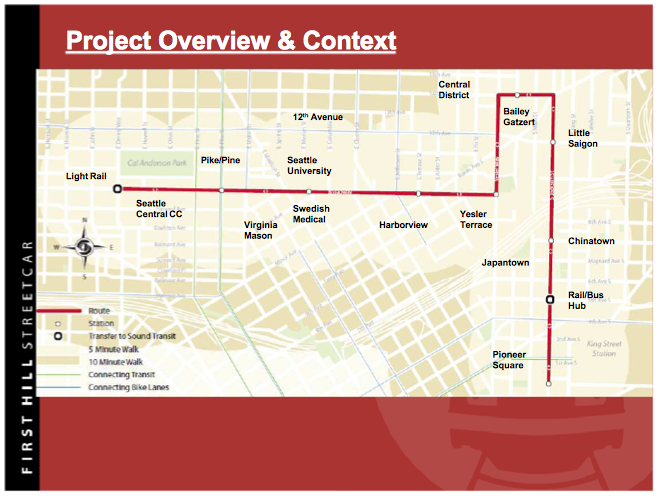 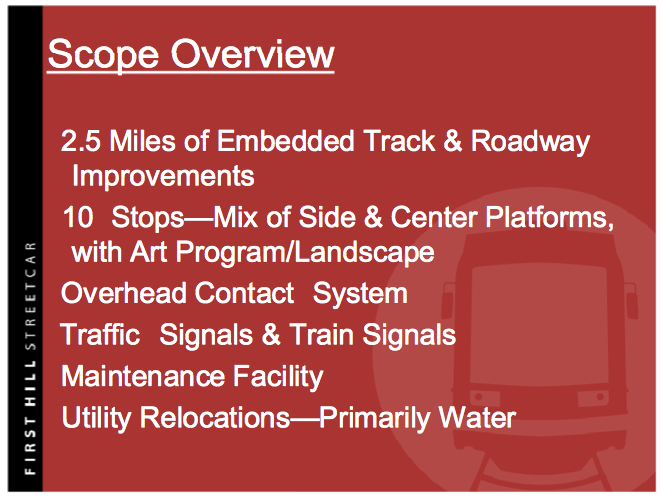 SDOT says that while the work will move relatively quickly once it begins, we can expect some pretty major construction areas while it is underway. It’s intensive enough that it might make sense to do some of the major utility work we reported on here during the streetcar installation. 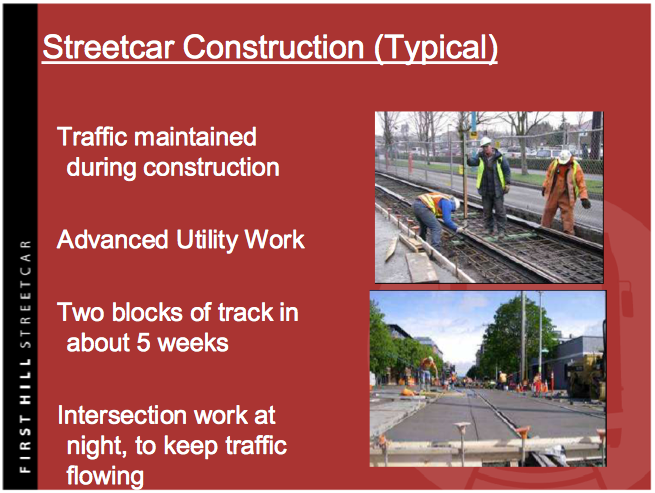 The early construction schedule shows work won’t start on the final section of Broadway track until midway 2012. Planners also note that any intersection with four pedestrian crossings has to maintain three of those segments during any work so walking flow in the neighborhood shouldn’t be too adversely impacted. 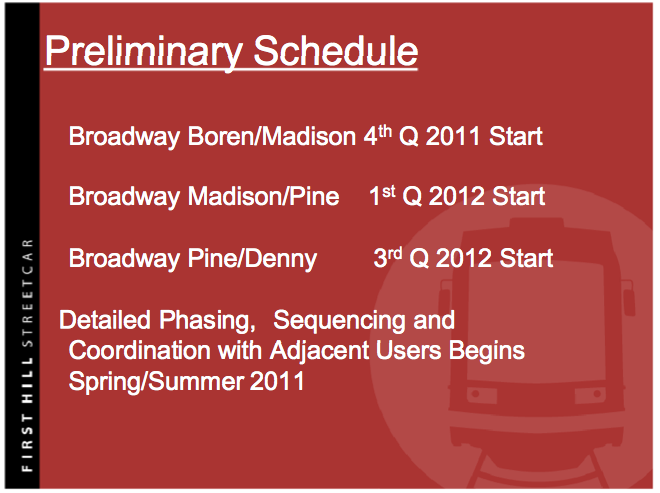 The documents also provides schematics of some of the major intersections so you can get a sense of how the track and bikeway will change the street. There have also been some platform location changes since earlier in the planning process including a decision to move the current northernmost platform on the line a bit further south to better mesh with the coming Broadway light rail station when it becomes operational in 2016. In the original set-up, the streetcar’s final segment would have had to been delayed until the light rail work was completed.

Also, remember that there is still information being gathered on the feasibility of extending the streetcar to north Broadway. 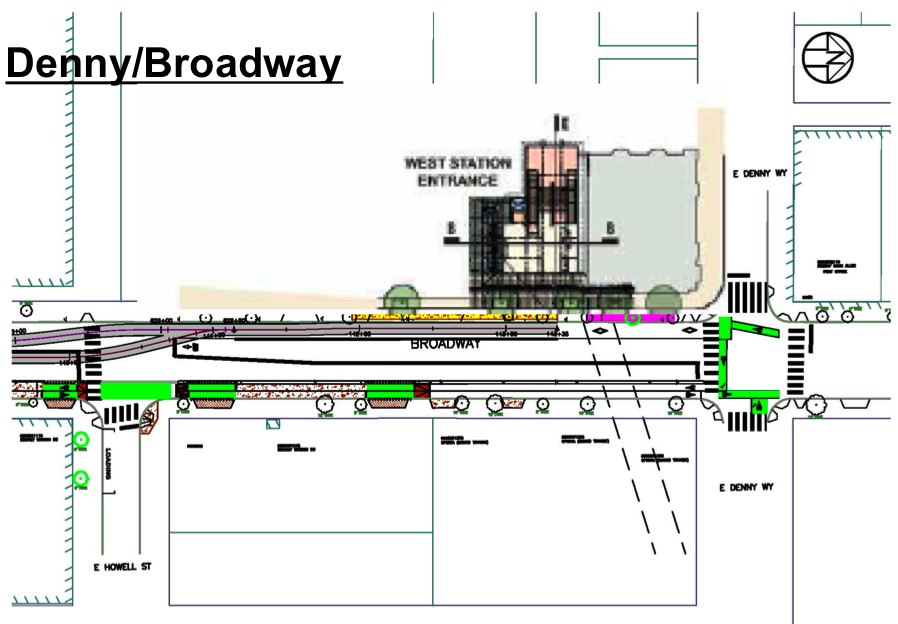 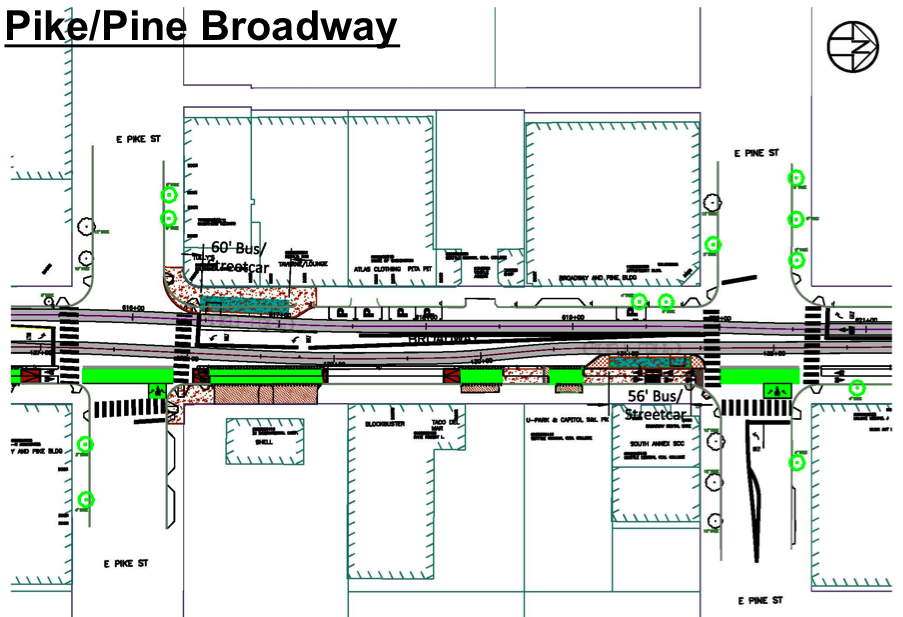 The next steps for the streetcar include authorization of the construction contract by the City Council later this summer. Though Sound Transit is footing the bill for the project, the Council is in charge of administrating the work and making sure the project adheres to the agreement.

Here’s the presentation in full:

I REALLY think that extending to N Broadway is critical to this being worth the money. There is a large population that lives North of Denny who I’m sure would love to make use of this, but only have to walk a block to catch a bus downtown instead. I would much rather take the rail that a Metro bus.
And, it just makes sense. Where Broadway turns into 10th is the natural point where the public/commercial district ends.

unless you are headed somewhere in The ID, a bus will still be a quicker way to get downtown…

My plan is to walk to Broadway and E. John St. And be downtown in 2-3 minutes. Of course, I only live 4 blocks from the station. I still think the extension to Roy St. or Aloha is best, I think it will generate many trips to Little Saigon for dining and specialty grocery shopping trips. I am curious with the Yesler Terrace redevelopment if that will end up being a neighborhood that interests us to explore as well.

How is this going to impact people on bicycles?

Do you know if there’s been any talk about allowing the first hill streetcar to link up with the waterfront streetcar, so that the waterfront streetcar could use the same storage/maintenance facilities? The tracks come within a block or so of one another in Pioneer Square, so only a small spur would be needed. (The historic streetcars would need to be upgraded to the newer voltage, but at least it might solve the long running issue of not having a trolley barn.)

Actually, Link will be faster. 3 minutes between Westlake and Capitol Hill. This streetcar’s purpose isn’t to reduce travel time from CapHill to downtown; it’s to connect First Hill to the nearest two Link stations since they lost their own.

The Waterfront streetcar is pretty dead. This line will eventually connect at King St./Union Station to the Central Streetcar (1st Ave. up to the sculpture park and east on Jackson to 23rd or MLK), and that line will connect at 1st & Stewart with the SLUT which hopefully will be extended to Fremont and Ballard along the west side of Lake Union, and to the U. District along the east side. You can see the approved streetcar network map at http://www.seattlestreetcar.org.

I think the main issue with the cars is the station length on the Waterfront Streetcar’s stations. But with the viaduct coming down by the time the First Hill streetcar opens (god let’s hope so) it’s not likely we’ll be able to go that route.

Aloha extension is the perfect thing for the feds to fund.

The original 1996 Sound Move ballot measure that created and funded Sound Transit — which passed with the strong support of Capitol Hill voters on the heels of a failed 1995 measure — included a full light rail subway station at the north end of Broadway around Roy/Aloha. After the vote, this was cut from the plan prior to cutting the First Hill Station, but there’s a reason a rail station had been proposed there: North Broadway is a dense urban area that continues to see growth, and it’s the natural turnaround for the new streetcar line. The subway station that was considered would easily have cost 10x as much as extending the streetcar line to Aloha. If that was a tough call, this should be a slam dunk.

Yup. I used to live in the Pearl District in Portland, the buses are quicker; although, a few things I valued more about the streetcar was the cleanliness, its reliability, safer, and higher capacity. The streetcar has signal priority in some areas of Portland (but NOT all). I work at OHSU so I’d take the streetcar to work and ride the bus home… it really depended on the time of day (and all the tourists).

Not only is there the streetcar ignoring all the folks who live north of say Roy St but the underground lightrail does, too.

I work at the UW. I’m not going to walk from Top Pot Donuts all the way to the light rail station, then get off of it at Husky Stadium and walk another long way up to the Burke Museum.

I’d like to see a color-coded map of who is expected to mostly benefit from these two projects.

As a native Seattleite I am often saddened by our decades-long lack of cohesive, long range planning. We have a patchwork of solutions that usually don’t work well together.

You lost me at walking from a donut shop. Maybe you should walk more.

Um…it’s a 10 minute walk (or less) from Top Pot on Summit to the new light rail station at Broadway and John. Just sayin’

-Also a native Seattleite who lives in Ballard, who currently walks the same distance to catch the 44 to the UW everyday and would relish a light rail station in my neighborhood.

?? anyone know when it should be up and running?