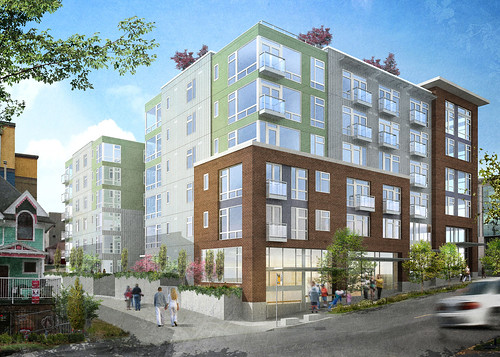 Construction on a six-story mixed-use residential and retail building at Broadway and Jefferson is scheduled to start in August. Portland-based Gerding Edlen purchased the property from Valencia Capital Management of Dallas for $5.6 million earlier this month, according to the Seattle Times. Valencia paid $3.14 million for the property in 2007.

Central District News reported in December that owners of the property at 412 Broadway had put the land up for sale months after the City Council authorized a rezone for up to 70 feet in height.

The building, designed by Ankron Moisan Associated Architects, will have 118 residential units and 6,500 ft of retail space. Twenty percent of the residential units will be “designated affordable,” according to Gerding Edlen’s press release. They anticipate a LEED Gold certification on the project.

The planned rail projects in the area seem to have played a part in the firm’s decision to purchase the property, according to the press release:

Municipal plans for an extended light rail system from downtown to the Capital [sic] Hill, as well as a streetcar line that will connect this light rail to Union Station in the International District/Pioneer Square will offer direct access to a multi-modal transportation system for the residents of 412 Broadway.

Gerding Edlen will start holding public meetings this summer to engage the community to better fit into the neighborhood, said Ann Hudner, spokesperson for the firm.

“Gerding Edlen has a really wonderful approach to wanting to integrate and engage the community in their projects,” she said. Other projects have included site-specific art by local artists.

Permits have not yet been issued for construction of the project described by the previous developers as a 6-story building containing 100 market-rate apartments targeted towards employees in the nearby medical facilities, and the first-floor retail with room for five to eight new businesses.

This project will be the first Seattle-area development for the company since their 43/42-story Bellevue Towers highrise condo project was completed in 2009. After selling just 118 of the 539 units, the firm handed the buildings over to lenders earlier this year to avoid foreclosure, according to the Seattle Times.

The lot previously held a 4-unit house that has since been demolished. You can still view the old home (for now, at least) in Google Street View.

Summer 2011 is shaping up to be a busy time for construction on Capitol Hill — especially at its southern edge along Madison — and now down Broadway.

Than the gigantic hole in the ground currently occupying the lot.

someone gets mugged at this intersection – its a part of the CD. a nice building goes up and its capitol hill.

Fair swipe but also not fair. Don’t know if you’re aware but I also run http://centraldistrictnews.com/ — Tom and I have had to be more surgical from a resource standpoint about how we cover the neighborhoods and that has meant shifting some coverage areas to be more compact and cleaner. If there’s an area that really seems culturally mis-aligned, I’m open to feedback but we had to make a few tough calls and Broadway past Madison was one of them.

Hi Justin: I’m sure it is difficult at times to decide if a certain area is part of Capitol Hill, but in this case it is clear-cut as this location if definitely part of “First Hill.”….as is the area south of E Pike St and west of Madison, for example.

So, do you plan on covering all of First Hill, or just selected parts?