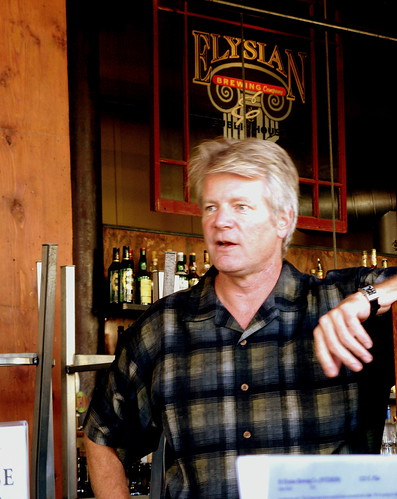 As he prepares to celebrate its 15th year of business, we have questions out to Dick Cantwell of Elysian Brewing about how an honest-to-goodness beer brewery came to be on Capitol Hill but we haven’t heard back yet. Going by the Internet, the Elysian has always been on E Pike — let us know if you can find a single online account of its 1996 opening. It’s as if Kromos burst from the pavement and set to brewing for the heroic and the virtuous. This says he came from Boston as a homebrewer to learn the trade at Pike Place Brewing, then Big Time before teaming up with the guys from Rogue Ales to open the first Elysian.

Today, there are three locations in the Elysian family with a fourth on the way.

We salute Elysian for those soft breezes of yeasty brew that waft through Pike/Pine sometimes mingling with the latest roast at Vita. No, that’s not Bonney-Watston. It’s beer.

Next week, Elysian celebrates those 15 years with a turn-back-the-clock party and five days featuring their top 15 beers… ever.

THE ELYSIAN THROWBACK PARTY on our actual birthday – MAY 10 –

Dust off your flannel and cardigans because we are heading back to the 90’s with our clothes, music, and some original food menu items! — not to mention Retro Happy Hour with 1996 pint prices ($2.00 PINTS) from 3-5pm that day. Look for special treats from the Cellar to be pulled out on this night!! Starts at 3PM with the Retro Happy Hour.

Hope to see you all there.

Capitol Hill was always the place we wanted to be as we did due diligence and checked out other neighborhoods in Seattle–Ballard was another; in fact, we looked at the present Hale’s location before they did. We kept dreading that someone would beat us to the punch, and in fact McMenamin’s put the Six Arms in around the same time. Before we even opened, Ed Murray’s folks called us to see if they could kick off his campaign in the space. They said it was the biggest place they’d found on Capitol Hill.

It took us about two years to plan, write the business plan, raise the money, etc. We opened a week late and $3000 over budget. I had been brewing at Big Time–we brought a lot of their old staff over–and before that at Pike Place–Fal, their head brewer rode his motorcycle inside the day we opened. I also worked at a place on lower Queen Anne–Duwamps Cafe, before that. We opened with one of our beers–The Wise ESB–a little fruity because of a warm fermentation–and filled out the taps with beers from every brewery that any of us had had anything to do with in the past. We raced Pike to brew first, since they were opening their new place in the Market South Arcade. After a year-plus of going neck and neck, we beat them by an hour.

We charged $2.75 for an Imperial (20 oz) pint, since we’d begged for Newcastle, Guinness and Young’s pint glasses from distributors. We meant to charge that for the happy hour (3-5) on Tuesday, but somebody mis-heard and put out the word that it’ll be $2.00 for a 16-ouncer, so that’s what we’ll do.

We could afford so little interior lighting at the time that at night the big orange sign from the storage place across the street did most of the job for us. The orange light looked good on the copper-fronted bar, though.

We had couches in those days, and a pool table way in the back, though because of all the concrete we had poured to give the brewery floor adequate slope there was about a 14″ variance of floor to table height around the perimeter.

We probably bought 200 Piecora’s pizzas during construction. I wanted to save them and cover them with epoxy for a big pillar somewhere. We had a birthday party in the space a month or so before we opened and about 500 people came, including Roderick from Sky Cries Mary and Mark Olsen and Guy Davis from Sage. Roderick brought Krist Novocelic. Somebody built a fire out back, which I had to make them put out.

We had live music for the first five years we were open, and had a lot of great bands play. Probably the most fun were the Halloween parties–Ghoulbooty, with Skerik and Reggie Watts and Om and many others in the band.. I think we did six of those. Someday we’ll do another one. We talk to Skerik about it nearly every year and something always falls through…

We’re bringing back a lot of great beers for the party on Tuesday, and for the whole week in fact. I’m looking forward to the Maibock, and the Sextacula, which is the actual anniversary beer, should be..sextacular! Come join us.

Awesome. This is a great read, Dick. Thanks for sharing it with us and congratulations.

Hi Dick! Love the Elysians and your beautiful beers.

Please do try to get a Ghoulbooty reunion show going. That would be the shiznit.

Hi Dick, what’s your best selling beer? I personally love Dragonstooth and Perseus. They are masterpieces. My wife is nutty for Bete Blanche. Keep up the good work!

Hi J – I’ll put this under Kendall’s nose and see what he can tell you about the “history” of Elysian Brewing in Seattle. He’s got a great memory for that kind of detail, as long as beer is involved. – Kim

Should have read the comments first, Dick’s got you covered. Hmmm, that sounds bad. Oh well, it’s Capitol Hill after all.

We’ll be up there Tuesday night for the party, looking forward to it! – Kim

We had so much fun at Ghoulbooty! And also saw The Rockin Teenage Combo, a fabulous jam/fusion trio at your place. Congrats on 15 years!