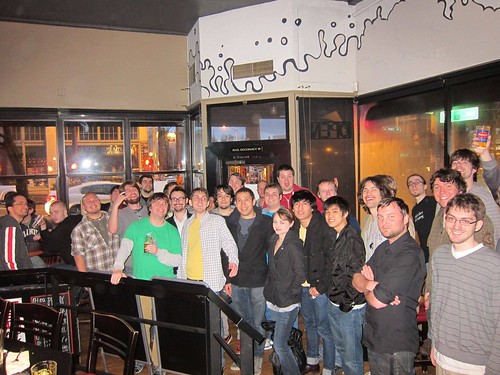 We’ve told you about the social media plans behind incoming E Olive Way club The Social. Wednesday night, another Capitol Hill lounge set its sights on a different end of the wired culture spectrum: the socially awkward. Chao Bistro — which has been kicking around some ideas for reinventing itself — hosted a bar full of StarCraft video game fans last night as it screened matches from the North American Star League:

If you’re like me when you’re hanging out at a bar you get a little bored with the same sports game on TV all the time. I’ve always wanted to watch pros play video games instead. There’s a bar in Capitol Hill where we can do that. Chao Bistro’s owner is from Korea and loves StarCraft. We’ve got things set up to watch Wednesday nights North American Star League matchups at Chao Bistro.

NASL’s Wednesday (May 11) matchup is:

The pregame starts at 5:30pm and the first match is at 6pm. Chao will have food and drink specials and happy hour goes til 7. The matches usually end between 9 and 10pm depending on how long it takes them to crush their opponents.

So if you’ve ever wanted to hang out at a bar while watching professional StarCraft with other like-minded fans come by Chao Bistro this Wednesday night.

Apparently, it was a big enough hit that it could happen again.

The one girl in the crowd photo looks a little scared. God bless her…she wins the best girlfriend ever-award for braving that crowd.