The person arrested during this weekend’s vandalism on Capitol Hill is a transgender anarchist and activist best known for smashing windows at the Democratic party headquarters in Denver in a summer 2009 attack, CHS has learned. Maurice Schwenkler, 25, was booked into jail early Sunday morning after being arrested as police busted up a march on Broadway that also resulted in broken windows at businesses along the crowd’s route and attacks on police cruisers. Schwenkler, who goes by the name Ariel Attack, was booked for pedestrian interference but has not yet been charged with a crime.

CHS has confirmed Schwenkler’s identity by comparing Seattle and Denver court records for the 25-year-old. 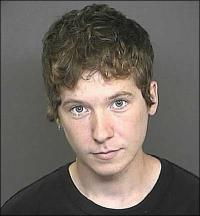 Schwenkler pleaded guilty in the 2009 Denver case and was ordered to pay $5,000 in restitution. Anarchist groups raised funds to help cover the penalty and Schwenkler’s legal bills.

According to a spokesperson for the Seattle City Attorney’s office, charges in the case could take weeks as police gather evidence and prosecutors weigh their case against Schwenkler.

The Saturday night/Sunday morning melee started as a gathering billed as “a roving dance party in the streets.” Participants report a situation that quickly turned hostile and destructive as some people in the crowd of 100+ participants began attacking police cars and attempting to break windows. Two businesses suffered broken glass, an ATM was smashed and two patrol cars were damaged. SPD called the situation a “mob” in its report on the incident.

Schwenkler’s arrest was the only one reported by police in direct connection with the incident. No significant injuries were reported though SPD did say one officer suffered a minor shoulder injury. A police officer responding to the East Precinct from downtown as the situation escalated was also injured when his car smashed into a utility pole downtown as he rushed to assist.

so, not fooled by fake anarchy: if you disagree with a trans person’s politics then it is ok to call them by the wrong name and the wrong pronoun? if you really are trans then you would see thru that bullshit.

ooooohhhh…. cry me a fuckin river

if you really were trans you wouldn’t be calling Ariel by the wrong pronoun.

@ Andrew, it helps by shocking the general public into thinking about these issues for once, and taking sides, whatever that side may be.

anarchists realize that overcoming banks isn’t going to happen by appealing to them by writing letters or whatever. that shit just gets thrown in the trash and the message of their campaign is silenced. by doing something small, destructive, and symbolic, heads turn and people think.

for the record, vandalism is not the same as violence. i have never heard of an anarchist committing a violent crime against an individual. who cares if they smashed some corporate buildings window?they paid them back for it anyway, jeez.

“it helps by shocking the general public into thinking about these issues for once, and taking sides, whatever that side may be.”

Wrong. The public has NO FUCKING IDEA the issues you’re standing for because you made no effort to make those issues known.

To the public, you represent the drunken party you hijacked and that’s the end of it. Counter to your own goals, now there are arguments for MORE cops and increased police presence at public events.

Thanks! You really made people think! A+!

way to go tranarchy. you are basically admitting that it was never emant to be a dance party and that your group duped people into attending a political action. shame on you.

tranarchy – firstly, i laugh at your questioning of my trans status. so, are you saying that “Ariel” is mtf, then because i highly doubt it. or are you saying that this person has multiple genders to go along with their multiple identities? that’s not being trans, that’s just being stupid and living in one’s own made-up world. what a joke.

i’ll give you taht ariel might be this person’s chosen name, but what pronouns should i be using? Ze and hir? Really you’ve provided no guidance on that, you just say we’ve got it wrong. and i know plenty of cisgendered people who change their names, so tellign me i’m being transphobic for not using the right name or pronoun is ridiculous.

tranarchy, please tell me how Ariel has directly “kept the government from passing austerity measures that fuck the people over”

It is amuseing to see these liberals cling to their delusions. Capitalism and consumer culture have always been oppressive. No amount of liberal activism or charity donations are going to change the systems of oppression that we all live under. At best it treats some of the symptoms, but the causes are still there. Even the acts of property destruction from QFQ will not destroy capitalism and patriarchy, but it did give those people the feeling that they could activly resist the shit they live under everyday.
It is disgusting to read the transphobic, classist, and hetero/homonormative bullshit comments (here and other places) portrayed as progressive. The people who suggested the beating, murdering, and enslavement (via the prison industrial complex) of those involved in QFQ can die in their delusional capitalist dreams for all I care (which isn’t much). Even if those people who posted those fucked up comments were LGBT they can chock on my slug genitals.
Stop comlaining about rich people’s toys being broken or about the well being of the upper/middle class’ goons that serve them. Instead examine how the poor (and soon to be poor) are being oppressed by those who own&defend property,patriarchy, and hetero/homonormativity.