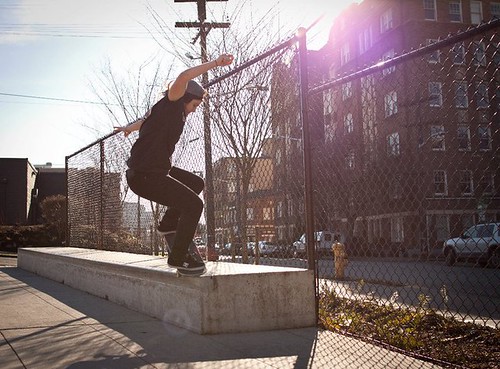 The Summit John skatedot will, indeed, continue its service to Seattle as the first skateboard-dedicated parks feature of its kind in the city. Superintendent Christopher Williams has agreed with the Seattle Parks Board recommendation to keep the Summit Slope Park feature but scuttled the recommendation to create a working group that would have been assigned to further anti-skateboarding noise modifications of the already heavily modified park.

While we are not sure how to ensure skaters are more polite, we are considering if there are any additional actions we can take to reduce noise. Two factors should be noted: 1) the project budget has been spent; and 2) we have researched many possibilities and not found any that would be feasible.

Noise and concerns about tagging and dangers from runaway skateboards have been at the core of controversy over the skatedot. In response to complaints, the city added an $8,000 fence and sign and a variety of anti-skate elements to things like railings to try to contain the skateboarding issues neighbors said the $13,000 skatedot was attracting. While things like skate stoppers and “turtles” have helped direct skateboard use to the skatedot and pushed some of the problem activities out of the park and p-patch areas, complaints related to noise from the park’s skate-friendly feature have continued.

Parks says the existing Skate Park Advisor Committee will be available to consider any continuing issues with the skatedot, the first of its kind in the city and a possible precedent for future park features. The committee provides guidance to Parks on skateboard issues, including whether bikes should be allowed to use skateparks and what design features to include in the parks as part of Seattle’s skatepark plan. The committee meets every other month on the second Monday. The next meeting is Monday, July 11 at 6 PM at the Seattle Parks headquarters, 100 Dexter Ave N. Minutes from previous meetings can be found at http://www.seattle.gov/parks/projects/SkateboardAdvisory.htm

Meanwhile, a Friends of Summit Slope Skate Dot group has been formed on Facebook.

What other neighborhood is going to want to go through this?

I live right by the pea patch/skatedot and have yet to see any problems. The mostly adult crowd that skates there obeys the signs. Even before the turtles and barriers were put in, they were conscience of people walking on sidewalks. The kids who do hang out there I often see talking and being friendly with the pea patch tenders. So dd, any neighborhood that doesn’t have it’s panties in a bunch should want something sanctioned for the skateboarders so they don’t have to skate on things that weren’t made for them to do so on. That’s were property damage happens and things get broken. Anyone complaining about the noise from people skating should have never moved so far with in city limits!

Panties in the bunch. Way to endure yourself to future neighbors.

@dd: that word does not mean what you think it means: http://en.wiktionary.org/wiki/endure

Sorry dd, not trying to outlast? my neighbors…Not sure what you meant by “endure yourself to future neighbors” meant. But if you are as uptight as you seem, I am glad you are not my neighbor. If you are, I already know which one you are and the rest of us in the building can’t wait till you move.

I live across the street and the noise generated by the skatedot is a problem. “City noise” is one thing that we expect while living in a densely populated area but the slamming of boards on a regular basis is not something the neighborhood should have to deal with day after day.

I like this idea. We’re all sharing the city. While I haven’t visited this specific area, I have walked by, or waited for the bus near other skate parks that were in use at the time. I don’t remember the noise of the boards being particularly harsh on my ears. It was there. It’s different, so maybe is stands out a little, but on a scale from falling leaves to metro bus, it falls somewhere in between. I think it just annoys some neighbors because they can tell what it is. I say, stop being so grouchy. “It’s noisy” isn’t a good enough reason for its nonexistence.

There should be a new apartment building or two coming to the neighborhood (but more distant from the park) in the next couple of years. Maybe the people who can’t deal with a lively park can move there. I like the picture of the skater and the residential buildings in the background.

Thanks for your ongoing coverage of this important issue. Also note that the July SPAC meeting is cancelled pending our meeting with Superintendent Williams regarding the Roxhill skatepark.

I have skated for two decades and my friends and I are some of the politest people you will meet.

Why does the Parks Department need to teach you to be polite when you are an adult?

This type of prejudice is just as bad as homophobia and racism. Sorry sir or ma’am, but you have moved to the wrong neighborhood if this is you out look on life and measures of which you use to judge people. It’s people like you that are the actual problem here.

Its to appease all the NIMBY whiners in the neighborhood that nothing better to do that call the city and complain.