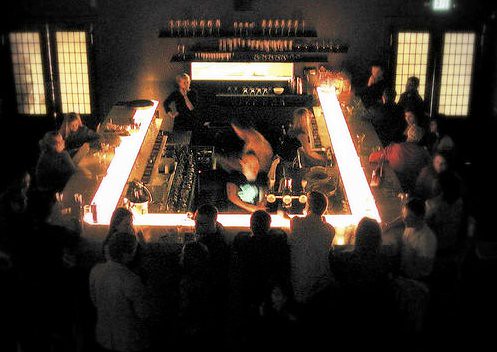 The Chapel, a bar created inside an old Capitol Hill funeral home on Melrose Ave, has announced it will close in September in a message posted to Facebook:

With great regret, we announce that The Chapel will be closing its doors on September 3rd. Until then, we are planning 6 weeks of partying. Join us in in the farewell and say good-bye to one of Seattle’s most unique establishments!

At the end of summer 2009, we reported on the bar’s new ownership. At the time, a representative told us the bar would be stepping up its efforts to host more events.

This is sad news. Uniqueness of the place might make it hard to find another tenant without renovations. Place always sounds busy have not been lately.

I think the style of Chapel Bar was simply not what the market around here is looking for.

Assuming the building owners didn’t have issues with a bar in general I’m going to guess this space will be snatched up quite quickly by another restauranteur. It’s a unique space with unbeatable (covered!) outdoor space, pretty close to downtown, and just up the block from the thriving Melrose Market area.

Wasn’t Holly Smith looking to start a brewpub on the hill?…

Walking back up the hill is tiring ;)

Service and food both just OK – and so unique I never felt any hanging out comfort there.

Was it gay or straight or what? Very different crowd each time I went there – mid all the suburban folks, you finish your drink and go to Purr … or Mad Pub, etc.

Off the beaten path for location – but the Hill is changing.

The problem with Chapel was the lack of an established neighborhood clientele. Living across the street, it seemed like they tried to cater to the Belltown Ed Hardy popped-collar crew, which was very wrong for the hill. Before business slowed down, there was a stretch hummer parked outside nearly every weekend night. The few times I ventured in, i received terrible service and worse than mediocre food. I hope the new owners take this gorgeous space and turn it into something better. My advice: Get a chef who knows what doing and avoid the “club” atmospere. Music is great but let’s leave Belltown in Belltown.

I thought Chapel had closed years ago.

I think it was supposed to be gay all the time, but functionally it was only after 9pm or so. I knew a Bellevue bro who liked going there for a drink and some dancing earlier in the evening, before it got got into the fully gay swing.

Tournant, you’ve hit the nail on the head.

The Chapel had HORRENDOUS service. Seriously. The most unfriendly, stupid bartenders on the planet. Good riddance! Hopefully something good will take over that space.