A new set of laws that will create Seattle street food zones where the new era of mobile culinary delight-providers can park and do their thing passed out of committee Wednesday and will come before the full Seattle City Council.

CHS first reported on the early plans for the Seattle street food ordinance back in February. Seattle planners have considered Capitol Hill — especially Broadway — to be a ripe environment for creating areas where people can more or less expect to find street food vendors during optimal times of day.

The new ordinance proposal approved Wednesday includes a batch of compromises arrived at after weeks of public comment and City Council wrangling. Here’s a roster of changes the committee made to the original legislation — most, you’ll note, deal with issues around distance from things like schools and restaurants, public notice and enforcement: 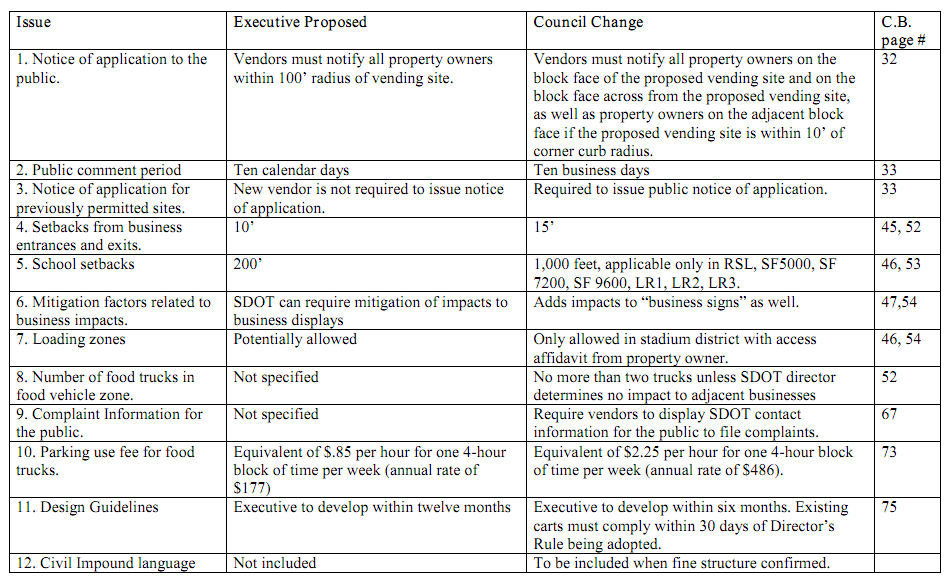 You can review the entire 75-page ordinance here. A memo outlining how SDOT will enforce the new rules is here.

The ordinance includes the fee schedules which, in the end, is also part of the big driver for putting this set of laws into action. The permit for food vehicle zones starts at $468 per day for a 4-hour period multiplied by the number of days per week a vendor wants the permit to be active. Add on a $344 administrative fee — or a whopping $688 for a 8p-6a permit — and you’re talking about a significant investment.

In the time that the City has deliberated the new law, Capitol Hill has seen food trucks take up permanent residence and a private property effort to establish a Capitol Hill night market street food pod on Saturday nights.

The new law set will also overhaul how SDOT permits things like sidewalk cafes and vendors. Committee on the Built Environment chair Sally Clark said she expected the full Council to vote on the ordinance Monday, July 18.

I’m reading that as 486 per year, plus the admin fee. Not per day. Did I miss something? Mu

I think per day means a particular 4 hour time slot on a particular day of the week. For example, the 10 am to 2 pm slot on Mondays. So if you pay the $486, you would get EVERY Monday for the whole year. That would be your time slot. So, not bad really. Currently, some trucks are paying $100 to maybe even several hundred dollars rent to private parking lot owners for the privilege of parking on private property.

What’s really interesting and could impinge the ability of food trucks to make full use of the street food parking zones, is getting bathroom permission from a nearby business. Trucks have to get permission for their employees to use a bathroom. And it has to be within 200 feet of the parking area. So nearby businesses could still charge a ransom-level rent or essentially veto the ability of a food truck to do business by getting together and refusing permission.

Rent per month, that is. For a particular spot. Many go to several different places.

yeah, my description wasn’t crystal clear. But it’s an annual charge per day of the week.

This is the first I’ve seen it mentioned that the fees are a big part of what’s pushing this initiative. Is this something you’ve heard from a city official? If that’s the case, I don’t understand why they are so low. $2.25 an hour to do business in a high rent area is a joke in my opinion.

I should have been more clear but I was trying to be balanced about the fees — restructuring permit fees around food vending was an important driver for this ordinance.

It’s not cheap to launch a street-food business. Vendors are at least $1,800 in the hole after paying for plan-review fees, commissary permits and operating permits, Skilton said. That doesn’t include money spent on a cart or truck or the cost to refurbish a vehicle and get it up to code.

And more costs are coming. The new legislation proposes a $146 base fee to park a truck in a new food zone — one of many fees under consideration.