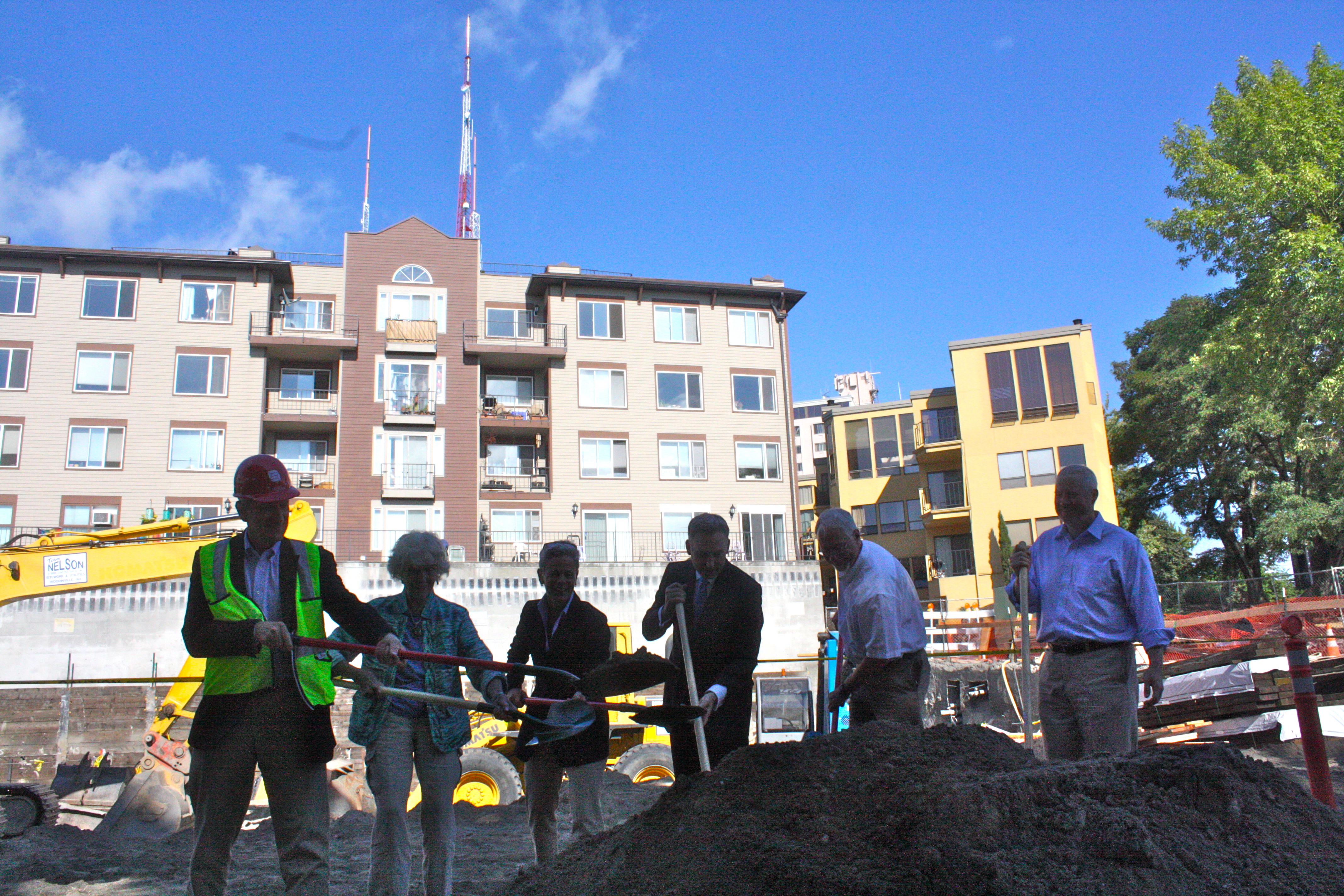 Calling the project a “harbinger of a new era” and drawing comparisons to the Anasazi pueblos, Istanbul’s Eye of Hagia Sofia, the development of the flying buttress and erection of the first steel skyscrapers, Bullitt Foundation president and CEO Denis Hayes made it clear Monday afternoon that he believes the start of construction on the $30 million Bullitt Center at 15th and Madison was a historic moment for Seattle.

Hayes said the new building is designed to be one of the greenest in world — and one of the most enduring with a planned operational life of 250 years, some 210 years longer than the typical commercial construction, Hayes said. The project is planned to be complete in late 2012, according to the developers. 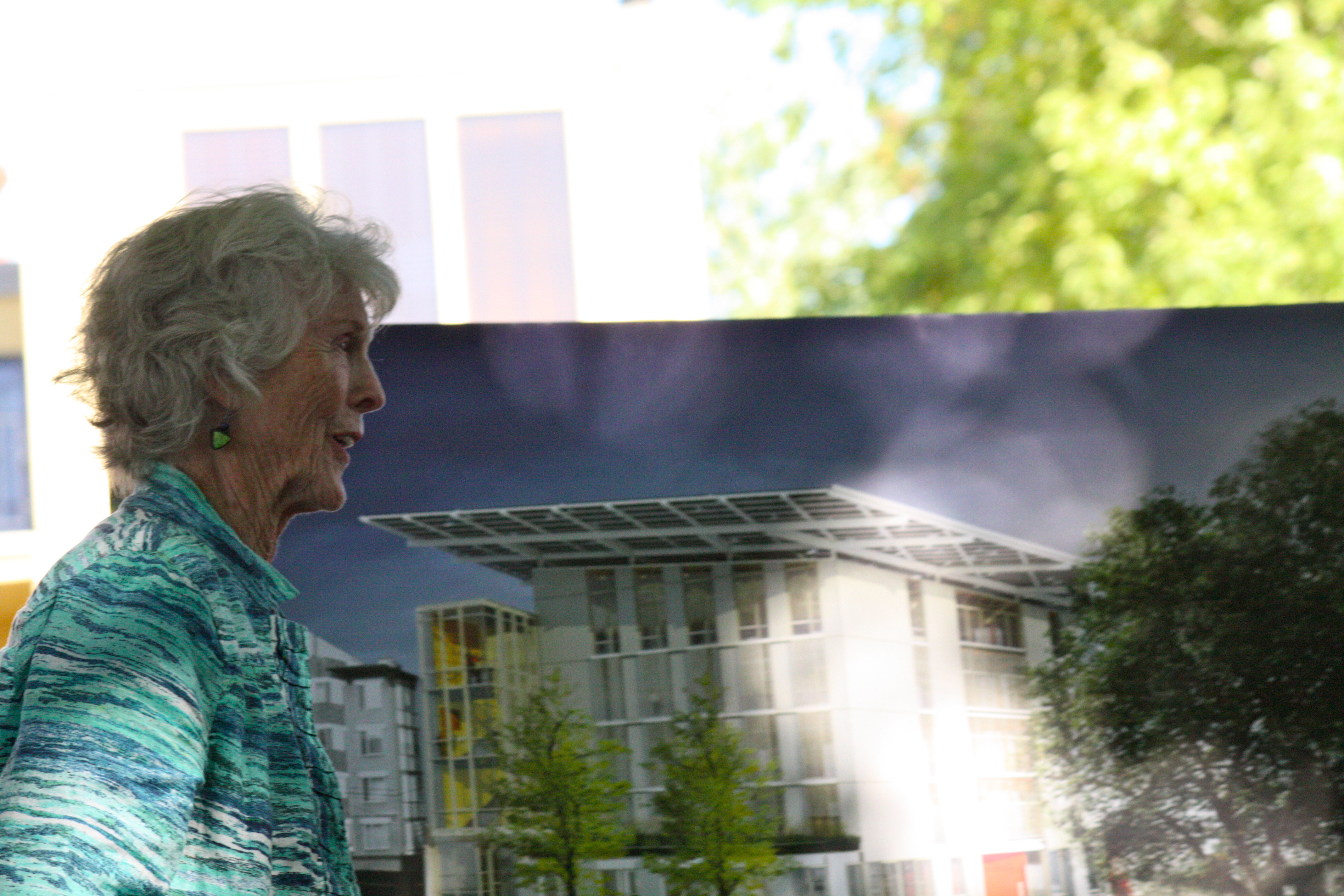 In addition to Hayes, the Bullitt Foundation was represented by board chair Maggie Walker and Harriet Bullitt, herself, daughter of founder Dorothy Stimson Bullitt.

Harriet Bullitt’s comments on the day were clearly the most un-scripted — and the most interesting. Saying her mother would have loved the planned building, Bullitt said her mother “was not really a environmentalist — she just lived that way.”

“We are very proud to have our name associated with it,” she said. Bullitt, who will turn 87 this Friday, also said she was happy the project will go forward “bending old rules.”

$30,000,000/52,000sf = $575/sf. how is this a ‘harbinger of a new era’ when there are site net-zero buildings that are more energy efficient per sf and for less than 1/3 of the cost?
the minergie-p eco marche international support office in kemptthal is site net-zero for ~$167/sf. plus it meets passivhaus, meaning it’s EUI (energy use intensity) is lower (more efficient)…

I will wait to see the building in reality – but they sure sucked this city in. Tax credits, state bond money, and something more important than …… and ….. and ……

How to get rid of the bullshit dropped at the site yesterday will be a big problem.

Reading the Times article yesterday, I think they talk about how well they expect the building to perform in their portfolio about as many times as they talk about its supposed energy efficiency.

Seems pretty naive to wonder if they really care about money or the environment more.

does the $30M price tag include the $10M NMTC from city of seattle, along w/ the $16.9M from Ecotrust and McCormick Baron? or is this construction only?

if not, this doesn’t seem like the best use of tax resources for the creation of less than 150 permanent jobs. yikes.

The Marche International office is a great building, though it’s on an open site and has a lower and larger footprint (more area for PV). Plus it was built in a country with much lower solar premiums. Hardly a fair comparison.

Bullitt had to tackle many more issues (both of construction and regulatory policy) to accomplish Net Zero in the urban setting, so for that alone it is an innovative project. I’m sure we can come up with a hundred more examples from Europe or Asia that claim to “do it better”, but does that matter? The message here is that this project is a positive step forward for the industry.

Marche Int’l is one of the few site NZEBs in the world with similar typology (office building) – it’s a fair comparison.

Marche has a TFA-based EUI (TFA is the passivhaus energy reference area, much less than GSF) of 2.5kBTU/ft2a, and the TFA-based EUI of Bullitt is approx. 20kBTU/ft2a.

Marche was completed in 2007. The installation cost of PV has fallen significantly since then, and the efficiency of PV has gone up as well – Bullitt will be paying much less for better performing panels than Marche did. Granted, Marche does have more room around it, but in terms of efficiency and cost (and in my book, design), it fares significantly better than Bullitt.

My biggest crits of Bullitt revolve around 2 issues:
1. It could have been significantly greener… By greener, I mean actual energy efficiency which would have resulted in significantly cheaper PV and potentially avoided previously documented issues w/ the neighborhood. Had Bullitt been more efficient, that much PV would have been energy positive/carbon neutral – and that is something I would consider innovative a positive step for the industry.
2. Bullitt could have been more cost-effective. Marche touches on many of the LBC petals, at 30% less cost per square foot than Bullitt (and that’s before accounting for the $26.9M in New Market Tax Credits Bullitt is receiving). That true efficiency can be achieved for such a cost in Switzerland is amazing, given their inflated building costs.

My biggest concern w/ Bullitt and similar LBCs is that by not being as cost-effective and efficient (or affordable), certain segments of the population will look at the incredible resources expended (much on behalf of the taxpayer), and point out the biggest problem w/ autarkic buildings – they do little to stem the actual tide of CO2 emissions.

nothing says eco friendly like tearing down an existing building/business instead of building infill on an empty lot. I suppose there weren’t any empty lots with nice views though.

This kind of reminds me of profiles in the Seattle Times of people who wanted to live green so they build themselves new houses… wouldn’t it be much more green to retrofit? How is using new resources eco friendly?

i was just wondering about the strike through on ‘eye of’ sofia…? he did pronounce hagia sofia properly. in fact, in turkey, they refer to it by the one word name ‘ayaSOFia’.

Thanks for the question — I should have added a note up top or not done the strikeout. I wrote out ‘Eye of Sofia’ phonetically in my notes and it made it to the site. Always fun when your goofs are on display for all!