Its developers are calling it the “the greenest commercial building in the world.” You used to call it CC’s. Monday afternoon, the ambitious Cascadia Center Bullitt Center will officially break ground on the $30 million project to create a “zero energy” office building on the edge of Capitol Hill. 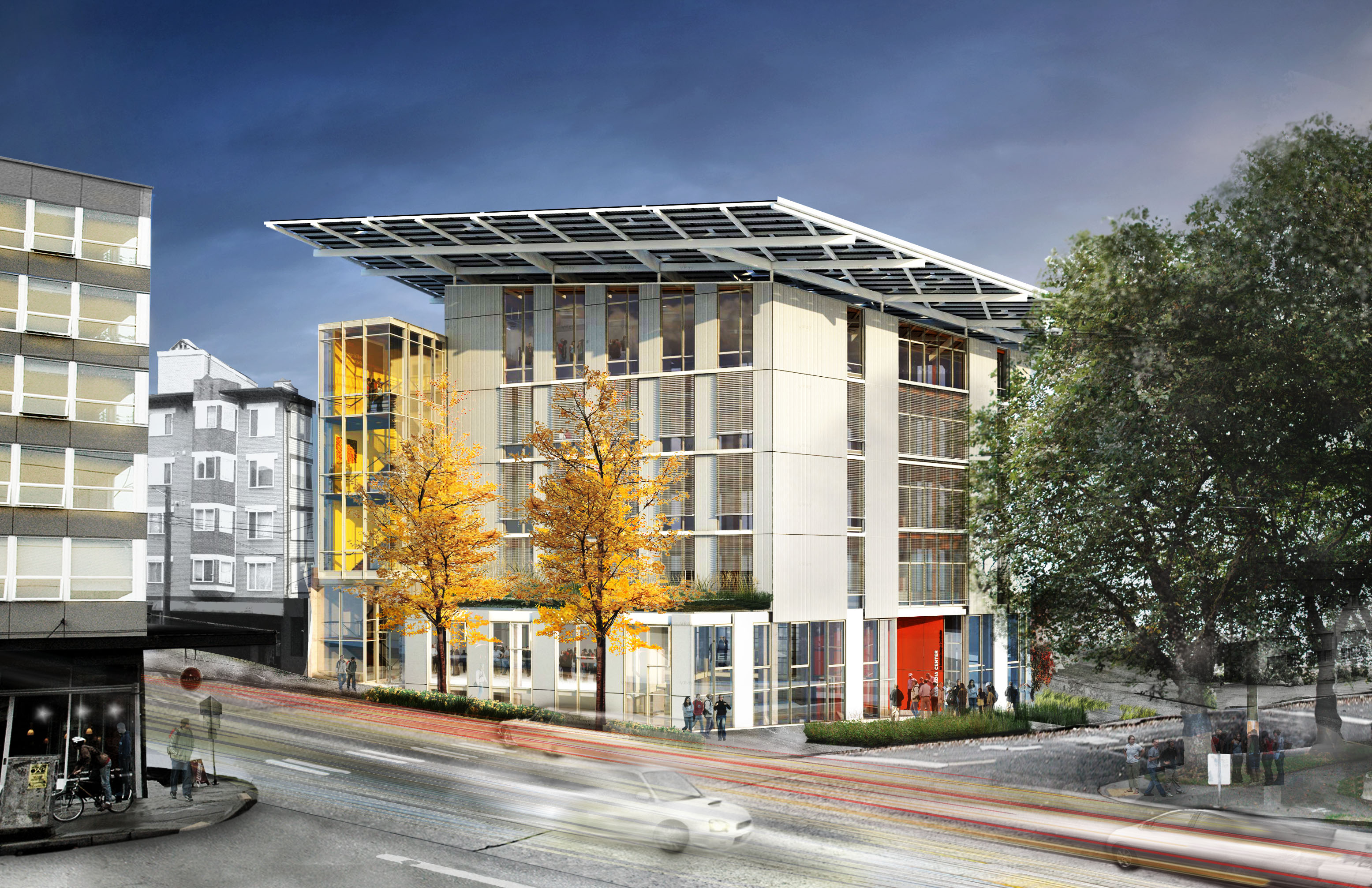 A groundbreaking celebration for the Bullitt Center, which is designed to be the greenest commercial building in the world. With solar panels generating as much energy as it needs in a year (in Seattle!), capturing rainwater for all water needs and treating all wastewater on site, the Bullitt Center goes far beyond a typical green building.

A solar panel like the ones that will be used on the building will be on display during the event.

The announcement, you may have noted, also marks a shift in the naming for the project from Cascadia Center to the Bullitt Center. “Formerly known as the ‘Cascadia Center for Sustainable Design and Construction,’ the building will be formally named the Bullitt Center at the groundbreaking event, to honor the Bullitt Family’s legacy of investment in environmental causes in Seattle and the Pacific Northwest,” the bulletin on the groundbreaking ceremony explains.

CHS has followed the development of the project over recent years including a battle with the owners of the adjacent apartment building in which the Hearing Examiner ultimately ruled in favor of developer Point32 and allowed the project to maintain its plan to build to greater height than typically permitted by the area’s zoning.

The 75-foot building’s ambitious “zero waste” strategy has also undergone some modifications as construction approached. In June, CHS reported that developers had decided to scrap a massive solar array planned for the south-facing wall of the center.

The Seattle Times reports on who we’ll find working at the Center when it is completed in 2012:

The building, scheduled for completion late next year, will be one more asset in the foundation’s diverse portfolio of investments. Hayes says forecasts indicate it will generate a positive return although it probably won’t be the portfolio’s best performer right away.

Income will come from rents. Tenants who have tentatively committed to lease space in the building say they’re willing to pay a premium to locate there.

Four of the six floors already are spoken for, says developer Chris Rogers, who is overseeing the project for Bullitt. Rents will be comparable to many prime “Class A” buildings downtown, he says. The foundation is moving its headquarters to the building, leasing half a floor.

Work has already been underway at the site since earlier this summer. Mayor Mike McGinn and County Executive Dow Constantine are expected to attend Monday’s groundbreaking ceremony.

Wow.Seems like Madison is going to be an extension of downtown. 2 really big new buildings. Seems like a lot for that little neighborhood,and I’m def not into the fact they pushed the height restriction.

I’m glad to see new development activating this stretch of Madison. While some may not remember, both the Pike/Pine and Central Area neighborhood plans call for more office space along Madison. And to put such a landmark in the area is only a bonus. I’ll be watching construction with excitement.

I’m glad this is finally happening.

and no parking for tenants…

With all of the nearby apartment buildings also permitted to have fewer than the required amount of parking, good luck finding street parking.

Plus the thing is five stories tall, not exactly a sky scraper.

I wish someone would plan something this ambitious for the intersection of Union & 23rd. If anywhere needs sprucing up, it’s there.

I think that’s kind of the point. There’s no shortage of nearby mass transit.

this project is at the edge of Capitol Hill (as reported) but it is in the Central District.

For some reason the mayor referred to “McGilvra Place, where we are.” Unless I misheard.

“Capital” Hill is spelled with an “O”.

as in CAPITOL HILL

surprising how often this goes unchecked.

Name of the small park, and the short street to the west, which I think is being given to the building consortia. They swear the will not take down the giant trees, I don’t believe them.

The park becomes front door space for the building people, which is fine, except neighborhood, old, queer, grumpy, ill dressed, and off beat, homeless, etc. will be pushed out 100 per cent.

No matter how much off-street parking is provided, demand for nearly free street parking in dense areas will always match the supply provided. You’re picking the wrong battle.