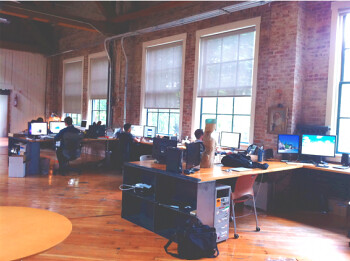 As some worry about the foundation for Capitol Hill’s economy becoming monolithic, here is some evidence that the food and dink culture that has become so strong has also attracted some new business blood to the neighborhood. Design firm Urban Influence and online audio start-up Hark found Capitol Hill homes this summer, joining the neighborhood’s high tech players and diversifying our economic skill-set. Here’s more from each on why they came to Capitol Hill, what they’ve found here and why more might join them.

David Aronchick says Hark is like YouTube for audio, featuring clips with everything from user generated content to material from familiar movies. “The idea is like when you think about what you want to share from a movie,” Aronchick said. “We enable sharing your favorite quote.” You can check it out in action in this (Blue Angels-inspired?) Hark blog post about Top Gun.

Earlier this summer, the company moved to Capitol Hill from Pioneer Square. “I’m telling everyone how great this is,” Aronchick said. “I can’t think of another place I’d host a company.”

Hark, with 15 employees in the country and five in Seattle, has settled into developer Michael Malone’s and Hunters Capital’s Broadway Building. Nearby, you’ll find the offices for Substantial and King of the Web. EnergySavvy is up and around the corner on 12th.

And, of course, in the cafes and shared working spaces, you’ll find a legion of freelancers and tech workers busily hacking away through Pike/Pine and across the Hill — another, um, substantial element of the tech economy on the Hill.

Aronchick said there were some key factors in making the move to the Hill work. For one, he said he found lots of choices when moving up here. “The spaces — We found lots of variety. Even the older buildings are quite good.”

Aronchick said the walkability of his end of Broadway and Pike/Pine area has also been valuable. “You park your car and you don’t have to drive everywhere.”

On the downside, rents are relatively high and the bus routes, Aronchick said, leave a lot to be desired. “When I was in Pioneer Square I could walk out my front door and be on a bus immediately,” he said.

But the bus issues haven’t dampened his enthusiasm. “There’s an enormous energy to the place. You see people’s faces here.” 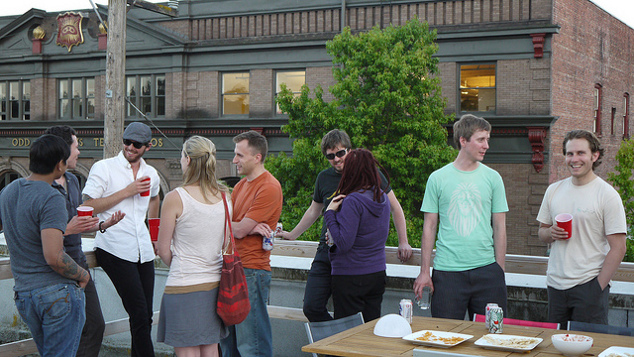 And, Aronchick says, that burgeoning food and drink scene is also a plus.

“When you take a lot of meetings, you want to be able to go to a good cafe or restaurant,” he said.

Good eats may have also helped bring design and brand firm Urban Influence to the Hill.

We asked principal Pete Wright about the decision to move from Sodo to 10th and Pike, another Hunters Capital building:

Capitol Hill is bursting at the seams with growth, business and creativity. We have always felt at home with the forward thinkers and it only felt right. Besides, we love salted-caramel ice-cream, Cal-Anderson,Rancho Bravo, and fois gras.

UI has documented the overhaul of its new Pike/Pine office on the Urban Influence blog. It takes over the space that was home to another design and brand player, Capitol Hill’s Creature. Creature took up in another Malone/Hunters project on12th Ave, making space for Wright and UI. By the way, looks like Creature’s plan for a big mural on the building never came to fruition.

Whether the two anecdotes of new players in the Hill economy really indicates a new strength probably will require analysis beyond the crazy crap you find on a Capitol Hill street. But both companies think there is energy and space for more to come to the area.

At Hark, Aronchick expects more tech players to join him on Capitol Hill. “I’m surprised that the Hill doesn’t have a better reputation,” he said.

Having worked in Pioneer Square (5 years) and lived and worked on Capitol Hill for quite some time, I have never found that public transportation is especially difficult from Capitol Hill. Also Pike & Broadway is a short walk to downtown (20 minutes by bus) and all sorts of buses. When I worked in Pioneer Square, bus service never seemed to be any better than on Capitol Hill – although, again a 10 minute walk would take me to the heart of downtown and plenty of buses that go everywhere. I have found that, as far as public transportation goes, Capitol Hill really is very good neighborhood.