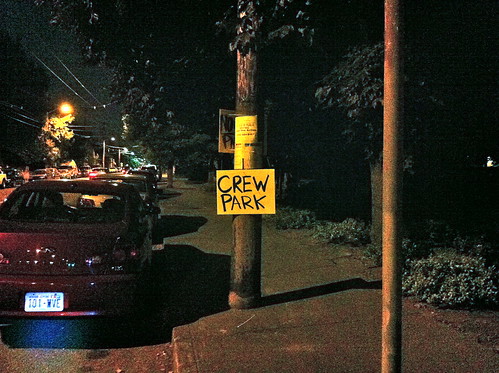 Hollywood was in full effect Thursday night in north Capitol Hill near Volunteer Park as a big budget comedy’s stunt scene was filmed at a $2 million home in the tony neighborhood.

CHS has learned that the hush hush production is called 21 and Over. To give you a sense of the high art going down at Federal Ave and E Blaine Thursday night, the film is being directed by Jon Lucas and Scott Moore, the writers behind The Hangover.

Relativity Media will release the hilarious comedy in which two childhood friends drag their straight-arrow buddy out to celebrate his twenty-first birthday the night before an all-important medical school interview. But when one beer leads to another, the evening spirals into a wild epic misadventure of debauchery and mayhem that none of them will ever forget.

This post includes some of the worst pictures ever taken of a movie set — that big long black streak you see in the lighter one? That’s a really big gigantic crane. We’re talking big budget stuff, here, folks.

The scene underway includes a stunt involving a character falling from a second floor window and landing in some rose bushes. We can’t be certain but it also appears some of the other homes in the area have been transformed to look like a college’s Greek Row. Either that or a home on Federal Ave E is also a real-life fraternity with large Greek letters on its front that we never noticed before.

No word on how late the shoot will go or if it will continue on Friday. From what we were told, it’s a night scene so things will probably be wrapped by morning.

If you’d like to be in the movie, there’s a call for extras on Facebook for a pep rally scene being shot at UW on September 21st.

That movie description sounds terrible. The first Hangover was not very good, and I hear the second was the same movie again. This doesn’t seem much different either. These writers need to come up with something new.

Ran past this afternoon and it looks like they’re ramping up again (saw the catering van pull up). Tonight might be another good chance to get a glimpse of Hollywood at work.

This was the minor distraction I passed Friday night in between the amazing sequoia on Federal and the amazing sunset from the Blaine St. steps.

The only part worthy of note was the Skillet Airstream serving as craft truck on 10th Ave E & Garfield.