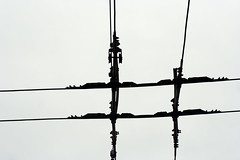 King County has settled in on a 2012 budget and County Council member Larry Phillips points out some good news for many of the most important bus routes on and across Capitol Hill — $238.6 million to replace Metro’s aging fleet of 155 electric trolley buses. Apparently four buses have been decommissioned since the slide below was made in 2010 — it documents 159 buses.

A statement sent out by Phillips, head of the transportation committee, says the funding will ensure “trolley buses will keep rolling in Seattle for decades to come.” CHS documented some of the reasons this is especially good news here last spring. Metro has said its 25-year-old fleet needs to be replaced by 2014.

Passage of King County’s 2012 budget by the Metropolitan King County Council settles once and for all the debate over whether to replace Metro’s aging trolley bus fleet. The budget includes $238.6 million to replace Metro’s fleet of 100 40-foot trolleybuses and 55 60-foot trolley buses, ensuring that Seattle’s urban neighborhoods will continue to benefit from clean, quiet electric buses.

“I was pleased to support funding to keep our popular trolley buses rolling in our urban neighborhoods, cutting down on noise and pollution,” said Councilmember Larry Phillips, Chair of the Council’s Transportation, Economy, and Environment Committee. “A lifecycle cost analysis showed that replacing our existing aging trolley buses with new off-wire capable trolley buses is the most cost effective and beneficial investment for the people of King County.”

Metro’s trolley bus fleet has reached the end of its useful life. A performance audit of Metro raised questions about whether replacing the trolley buses with diesels could save money and recommended further study. Phillips sponsored a proviso in the 2011 Budget directing Metro to conduct a comprehensive evaluation of replacement options that would work best on current trolley routes. The evaluation concluded that electric trolley buses with off-wire capability to avoid construction and traffic blockages were the lowest cost, most beneficial option for replacing Metro’s trolley bus fleet.

With the passage of the budget, Metro will be issuing a Request for Procurement for new trolley buses by the end of this year and should have a contract in place by fall of 2012. 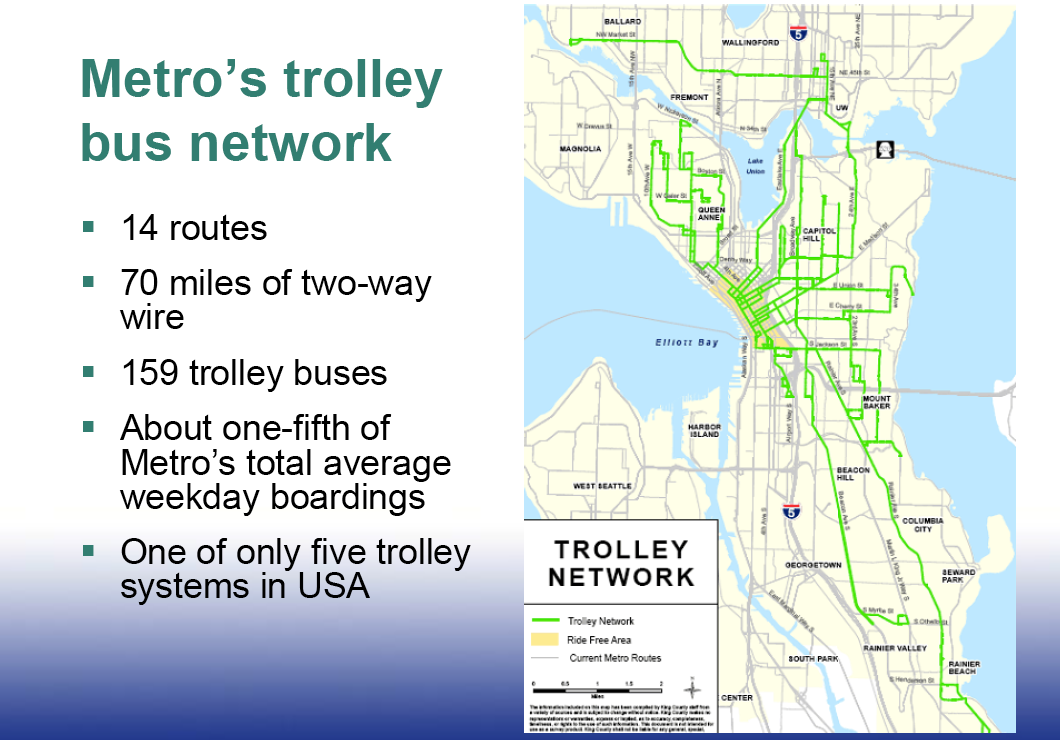 A slide from a 2010 Metro presentation (Image: Metro)

It serves the same neighborhoods that already have trolley buses. And, it slows to a crawl on the steep hills on Denny. An electric motor would do a much better job on the uphill sections.

Also, it seems like the 11 could be a trolleybus too.. they’d just need to extend the wires from 17th out to Madison Park along Madison. This would help it get up the hill on Madison between MLK and 23rd.

The 8 is a great candidate. But the possibility of any new wire being added is dim now that the myopic voters have said no to the $60 car tab which would have been spent partly on trolleys.

We sure will be thankful we have these when we look at diesel prices in 30 years.

There is more to the #8 than Capitol Hill. The rest its circuitous route down into Madison Valley and across MLK to the light rail station would be very expensive to electrify. “Just extending the wires” is a lot more expensive than you think.

The 8 shouldn’t go all the way to Rainier Beach. Period. All we need is Denny, and a section of MLK. And the section on Madison would be a downpayment on the 11.

@Ryan in the Sky,

As a resident of Rainier Valley who rides the 8 several times a week, I say :-(

Quote: “$238.6 million to replace Metro’s aging fleet of 155 electric trolley buses. Apparently four buses have been decommissioned since the slide below was made in 2010 — it documents 159 buses.”

Those four buses were not decommissioned. You can see them in various states of stoppage on Union between MLK and 32nd. They were stuck on the hill during that last big snow storm.

What a ridiculous Hill-centric perspective. This may come as a shock, but some of us do not ride the #8 to get to Capitol Hill. We ride it to get to the light rail, and, for example, on to the airport. Connecting Rainier Valley to Capitol Hill on light rail is not the point. You’d still need a way to serve all the people on the #8 route in-between Capitol Hill and the Mt. Baker station. That is not a straight-shot route; and even if it were, the straightforward sections of it would be very expensive to electrify.

Consider the possibility that we could break the 8 into two separate routes: an electrified portion from Queen Anne to Capitol Hill and a non-electrified route from Capitol Hill to Rainier Valley.

It’s a hill-centric blog so what do you expect. I didn’t even know the 8 went East of 15th and why should it.

Pray inform us what an ‘…..off-line electric trolley bus’ is, exactly.

I assume that it either means that the bus/trolley has a diesel engine that generates electricity and thus powers the bus, or it is like a traditional electric trolley, drawing its power from overhead wires, but also has the ability to operate off of storage batteries when the power poles break away from the lines or they have to go around a blockage or detour away from the power lines.

But the article offered no discription.

My understanding is that the auxiliary power will be batteries. Similar to the First Hill Streetcar which will be wired from the I.D. to Capitol Hill, but will run off-wire on batteries in the other direction. This concept opens up other routes which already run under some wire, such as the 8, to electric buses – depending on the length of the wireless segments and the capacity of the batteries.

It’s not hill-centric! I travel in the rainier valley all the time. I live on the hill yes, but the traffic on denny and the long-ass route to rainier beach is to the detriment of the entire route. ONE OF THOSE can be changed easily, and it’s not the denny routing.

I don’t know if anyone has noticed, but KC Metro’s fleet is starting to look mighty threadbare and long in the tooth. Pretty much every bus I ride the fold down seat to accommodate wheel chairs is either ripped or the piping is all exposed white. If the fleet’s not going to be replaced until 2014 they need to do some upkeep on the bus interiors. It looks third world.

I cannot wait for the news trolleys. At the forum earlier this year I asked about them being air conditioned and was guaranteed they will be. The trolleys are hell during hot summer days especially when a hygienically challenges person get’s on at least A/C will make for a more comfortable ride.

The money’s in next year’s budget. 155 buses will take some time to replace.

Off wire capability simply means the bus will be able to manuver around an obstruction or a stalled or disabled vehicle with its poles down off the overhead wire. However it only allows very short distance detours (a couple of blocks). The current trolly buses are totally disabled without connection to the overhead wires. Another note: The First Hill srteetcar will run both ways on the overhead wire (ID to Denny and back to the ID.

The lifecycle for a Metro bus is 12 to 15 years. So many are overdue for replacement. Tim Eyman’s anti-tax initiatives in the past decade gutted King County’s transportation budget and its ability to renew its fleet on schedule – hence the “threadbare” buses. Adjusted budgets and Federal grants have allowed more new bus purchases and you’ll see them on the streets in the next year or two.