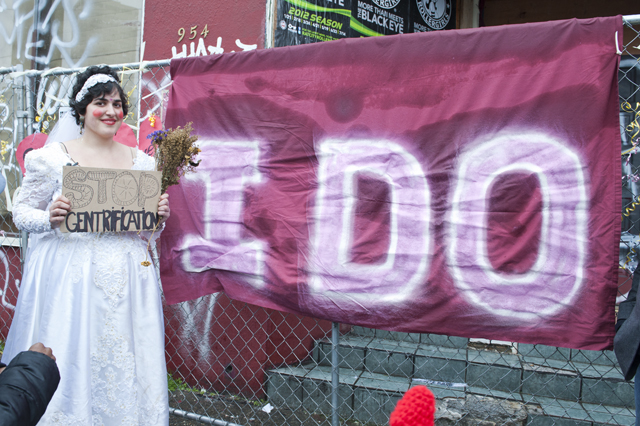 CHS wonders if the Capitol Hill residents of the future mixed-use apartment building destined to arise from the ongoing demolition on this backside of Pike and Pine will ever think about the love that preceded them.

On a rainy Sunday afternoon, that love was on full display as Babylonia Aivaz did solemnly take the 10th and Union warehouse building as her bride. And vice versa.

The wedding was held outdoors in the rain, in front of the old warehouse’s fenced-off entrance with a small crowd — and idled demolition machinery — looking on. There was a minister present, and a few Sisters of Perpetual Indulgence were there to bless the ceremony. The minister read a few passages and orchestrated the exchange of vows between Babylonia and the warehouse.

The ceremony closed with the crowd singing a few songs including “Lean on Me,” with a few special verses added by Aivaz.

The ceremony lasted about half an hour and a community potluck with pizza, burritos, and a vegan wedding cake were served afterward.

We first reported early last week on the protest wedding held to bring attention to what organizers say is the ongoing gentrification of Capitol Hill. Developers at the time said the demolition of the building would likely play out over several weeks. But by Friday it was clear this love would be fleeting as the first walls of the 1904 warehouse started coming down.

While not the model candidate for a Capitol Hill “character structure,” the warehouse does have its industrial charm. And its roster of recent tenants including Cork House, which opened summer 2010, the Museum of the Mysteries, which left last fall, Black Label Spirits, which sadly is gone from the space before it started, and the Capoeira and Brazilian dance infused Union Cultural Center (Facebook), was the kind of quirky milieu that could only survive in Pike/Pine’s more dilapidated nooks and crannies. None of the entities — except for, perhaps, Cork House which has shifted its marketing to a “Cork for a Cause” online play — will likely be able to pay the rent in the new development.

Not everyone approved of the marriage. The two protesters stood outside of the ceremony, holding signs that read “Marriage is Between Two people” and “It’s Not a Gay Union.”

Aivaz has said she fell in love with the building on the night she was arrested after a group attempted to take the building over but was repelled by Seattle Police and SWAT. The court process for the 10th/Union 16, meanwhile, continues.

No word on any honeymoon plans for the doomed couple. We suggested a few rebound relationships for Aivaz here.

Looks like it was a LOVELY ceremony. So sorry to have missed it!

Since when did gentrification of an area become a bad thing? I suppose if you want to live in a slum it’s not too good.

I Now Pronounce You Woman and Warehouse.

SoI understand she is trying to make a point, or at least I think I do. But this is just mocking marriage equality especially at a time when we need as much support as possible. She just gave opponents more ammo and marriage equality will be categorized with this. I can already here it “see bubba, I told you that if we let those gays marry, then they gonna start marrying pig, sheep, and buildings.”
I wish people would think about the greater consequences of their actions.

I assume she’s new to the area? This has been happening on Cap Hill for the past decade. If I were to pick one for marryin’, I’d go with the Undre Arms; that whole block is going to be razed to make way for a hideous monolith that is going to totally change the look and feel of the Hill along 12th.

My issue isn’t with “gentrification”, so much as the god awful “design” of the majority of the new construction in the area. Terrible. Kudos to the few that were able to integrate the older existing buildings into the new design.

If you actually care about this neighborhood, I think keeping informed and going to Design Review Meetings is more useful than terrible performance art.

The funniest part is that these people dont realize they are active participants in the actual process of gentrification.

Is anyone bothered by the fact a building can’t give consent?

By “anyone” I mean “anyone who thinks this was a good idea for a protest/performance art”. If the idea was that someone loves a set period of Capitol Hill, or longs for relics of the past more than the improvements of the presence, or thinks marrying something is a protest against rising costs or expenses… isn’t marrying a building adding to its inability to control its own fate.

In other news, I get the “don’t feel the trolls”, or the real world version of “don’t show up to crazy people’s events” but I am glad that the two fellows showed up with signs to note that someone thinks this is crazy.

If I had known there was gonna be food, I’d have been there ten minutes early.

And the Seattle Times is reporting that those of us who have Registered Domestic Partnerships will have until June 1, 2014 to convert our RDPs into legal marriages, or the state will automatically convert them. I plan on letting the state convert my RDP into a marriage so I can tell people I got married at the FedEx Kinkos. The clerk who notarized our application probably had no idea how momentous her actions were for us that day. In hindsight, I feel guilty that I didn’t even give her a tip.

is the dumbest thing I’ve ever heard of. Forcing that poor building into marrying an unattractive woman in clown make up. What did that building ever do to her? Let it die in peace.

I completely agree with your comment about the god awful design of the new constructions in the area. They all look like ugly shipping containers or childrens’ blocks.

How do you know, if you missed it?

Don’t you think it’s a possibility that the new building will have a great design? I agree that some of the new buildings are built on the cheap and not very attractive, but there are exceptions, such as Brix and also the development east of SCCC. I am hopeful that 230 Broadway (at Thomas) will be of similar quality..at the very least it will add density to our area, and that’s a good thing.

It’s easy to bemoan “gentrification” as a dirty word, but really all it means is needed improvements to our neighborhood. Bring it on!

I’ll have what you’re smoking.

I’m just worried about the reputation of our city’s art.

I’ll stop by the Caterpillar dealership to pickup some grease for the bulldozer, don’t want the ceremony to go on without being properly lubricated.

Right-wing blogs and Facebook users are already gleefully sending this story to each other as proof of what gay marriage will lead to. Her tactic gave the right-wing wackos more ammo and makes a mockery of the right to marry movement.

wHAT IS CRAZIER THAN THIS IS THE NEWS REFUSES TO REPORT POLICE AND PROSECUTORIAL MISCONDUCT BY SOME IN kITSAP COUNTY WA AND PORT oRCHARD police.THE AREA newspaper,THE kITSAP SUN FALSLY REPORTS AND HIDES THE TRUITH JUST AS MUCH AS THE MAYOR AND BRIAN MORAN WHO IS aTTORNEY GENERAL ROB MCcKENNA’S SECONDD HAND MAN.
The very people who are suppost to report the misconduct against me and cover up are the very people who need to be reported. The DOJ and FBI refuse to investigate the abuse of power in Kitsap County Wa.
So I ask the new for heelp and they give non. Kitsap County Wa and the abuse of power, corruption and good ole boys club needs to be exposed and can only do that through the media because the FBI and DOJ refuse to investigate along with Attorney General Rob Mcckenna. But the media thinks this ridiculys story is more important than people who have almost lost their lives. .

Hey i miss babylonia at scum church in u-district. I hope shes doing okay. Id offer to marry her in portland oregon at the church of elvis and get her a t-shirt.Id like to get her a valentine card and chocolates for valentines day. Id like to say hello and i miss her outgoing personality, signed edwin. hope to receive areply thankx

Gosh, I think “where is justice” somehow wandered into the wrong thread. Focus, my man.

Is this thread a dating site?