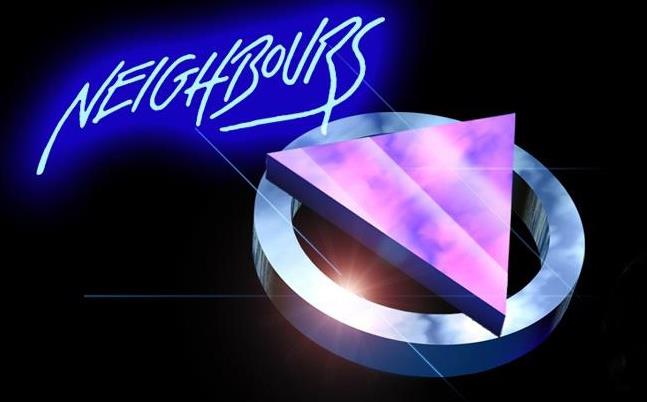 Three nights before its biggest party of the year, Capitol Hill’s largest dance club received a troubling letter. The Seattle Fire Marshal was threatening to shut Neighbours down by New Year’s if the club didn’t cut its capacity by 70% to less than 400 people before the event, a requirement the club’s management said would cause irreparable damage to its business. The standoff, clearly, was resolved — you only need dig through the piles of photos posted from the party by Seattle Gay News to see that the party went off as planned. But behind the scenes, a deal was struck that has the nightclub on the clock for a series of expensive changes that must be made if it wants to continue to operate as it has for decades on Broadway.

Neighbours hasn’t returned our messages but, according to the City Attorney’s office, the issues reported on by CHS in September have come to a head — Neighbours is permitted only as a restaurant and requires a series of significant upgrades to keep dancing, the Department of Planning and Development contends. Meanwhile, the City says the club’s basement space, Neighbours Underground, is a goner:

o If Neighbours does not meet the 2/3/12 deadline, occupancy goes from 950 to 340 or 499 depending on what is not done and stays at that level until everything is done; and.

o The basement cannot be occupied because Neighbours can’t readily install a 4th exit, and can only be occupied if building and fire code standards are met and permits obtained.

The permit woes add to the drama currently surrounding the Broadway club as a Seattle Police investigation of a brawl involving Neighbours security and off-duty SPD officers continues. The Seattle Gay News, by the way, published this account after reviewing security footage from the incident.

Back before New Year’s as the club was scrambling to keep its doors open for its party, Neighbours lawyers filed a December 30th injunction seeking to block the city from shutting the club down:

Exhibit A in the document included a series of annual permits issued by the fire department through May 2011 allowing a capacity of 1,116 at the club: 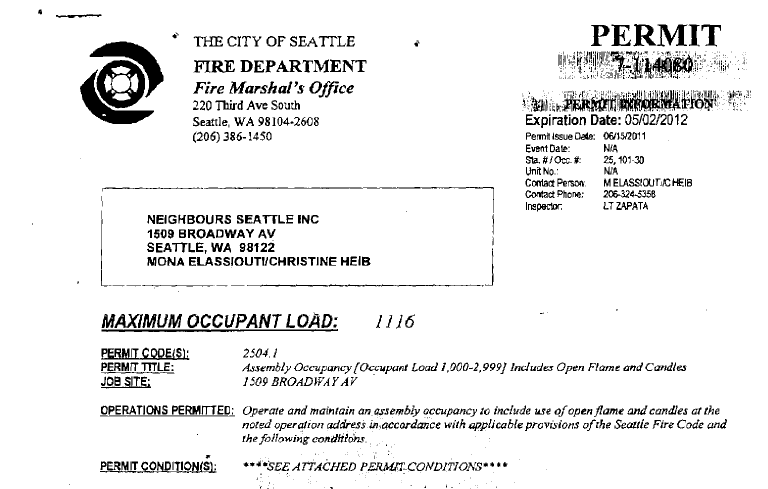 But the city says a routine fire department inspection last spring of emergency exits and the fire sprinkler system revealed that Neighbours can not be permitted as a nightclub even though people have been dancing there for decades. Instead, records show, Neighbours was zoned as a restaurant and the space doesn’t meet the legal requirements for a nightclub. That spring battle dragged out through the summer. According to DPD records, Neighbours has since failed a series of inspections to review changes required for the club to continue its operations.

A representative from the City Attorney’s office tells CHS an agreement on the new February 3rd deadline put an end to the court proceedings for the time being. Neighbours and MDK Law Associates, the firm representing the club, haven’t responded to our multiple attempts since September to talk with them about the situation.

Construction permits on file for the address have not been approved by DPD at this time so it’s unclear what work the club’s management could complete before next week’s Friday deadline. It’s the club’s Show & Tell party night, by the way. What’s at stake? Here’s what Neighbours GM Steve Tracy said in the declaration he gave in support of the backburnered injunction: 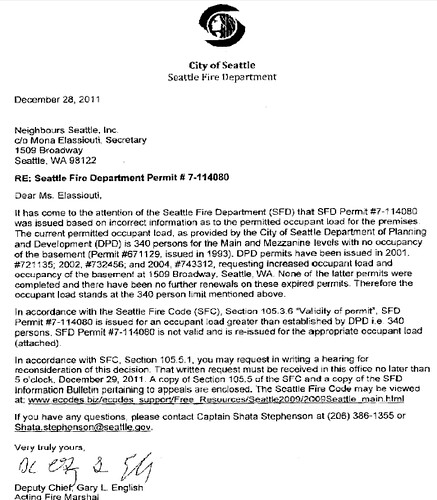 Thank you in advance for correcting this error.

The change in capacity will result in “fewer” not “less” people.

Thank you in advance for correcting this error.

given the amount of challenges in compiling that sentence, i’ll live with that flub :)

I haven’t been to Neighbours in years. Is it still a gay club? Or just metrosexual or whatever non-defining non-sensical term hipsters like to use to identify themselves these days.

I don’t think “metrosexual” is ever a term that hipsters used to self-identify. Anyway, I haven’t been there in a while either, but as far as I know, Neighbors is still a gay club with a lot of straight pals.

We have a pretty laissez-faire attitude toward permits around here compared to other cities who attempt to wring every penny out of local businesses, but it’s good to see this finally getting addressed. All it would take is one incident involving a fire near one of the exits and you could easily have serious injuries, drag queens trying to run in six inch heels and whatnot…

I’m sure both the city and Neighbors have known these changes were needed for several years and have just let it slide, like they did with the safety issues at 619 Western. I wonder what other popular spots around the city have been flouting the fire code?

Neighbours bills itself as a gay bar, but has been overrun w/ the Bridge and Tunnel crowd of this generation. On any given night you can find more of the of the little black dress high heeled ‘i like gay bars because everyone so nice and guys don’t hit on me’ gals w/ the testerone filled dudes that like to follow them looking for tail. Call it what you’d like though.

your third link.. the factory fire. the people died BECAUSE THE EXITS WERE CHAINED SHUT BY MANAGEMENT to keep the people working.

the nightclub fire: the building had FOUR EXITS just like the story says the City told Neighbour’s they need. The cause was FIREWORKS, not a tired decades old pseudo gay bar.

Trampling? It’s a stretch at best… out of the 5 incidents in recent history, one was the aforementioned nighclub fire 50 or 52 weren’t even IN the United States, others were at sporting events or the famous WALMART incident of people trying to get IN, not out. Entirely different scenario as well.

I don’t care for Neighbour’s myself, but knock off the nanny bullshit.

It seems pretty obvious to me there’s another plan the City wants to support for that space and they’ll stop at nothing to get rid of Neighbour’s.

The Imperial Court of Seattle still holds events there since it’s one of the few “gay” clubs that has an area that can be used as a stage. In fact they’re having an event there this Saturday evening.

RCW 19.27.510 “Nightclub” defined.
As used in this chapter: “Nightclub” means an A-2 occupancy use under the 2006 international building code in which the aggregate area of concentrated use of unfixed chairs and standing space that is specifically designated and primarily used for dancing or viewing performers exceeds three hundred fifty square feet, excluding adjacent lobby areas. “Nightclub” does not include theaters with fixed seating, banquet halls, or lodge halls.