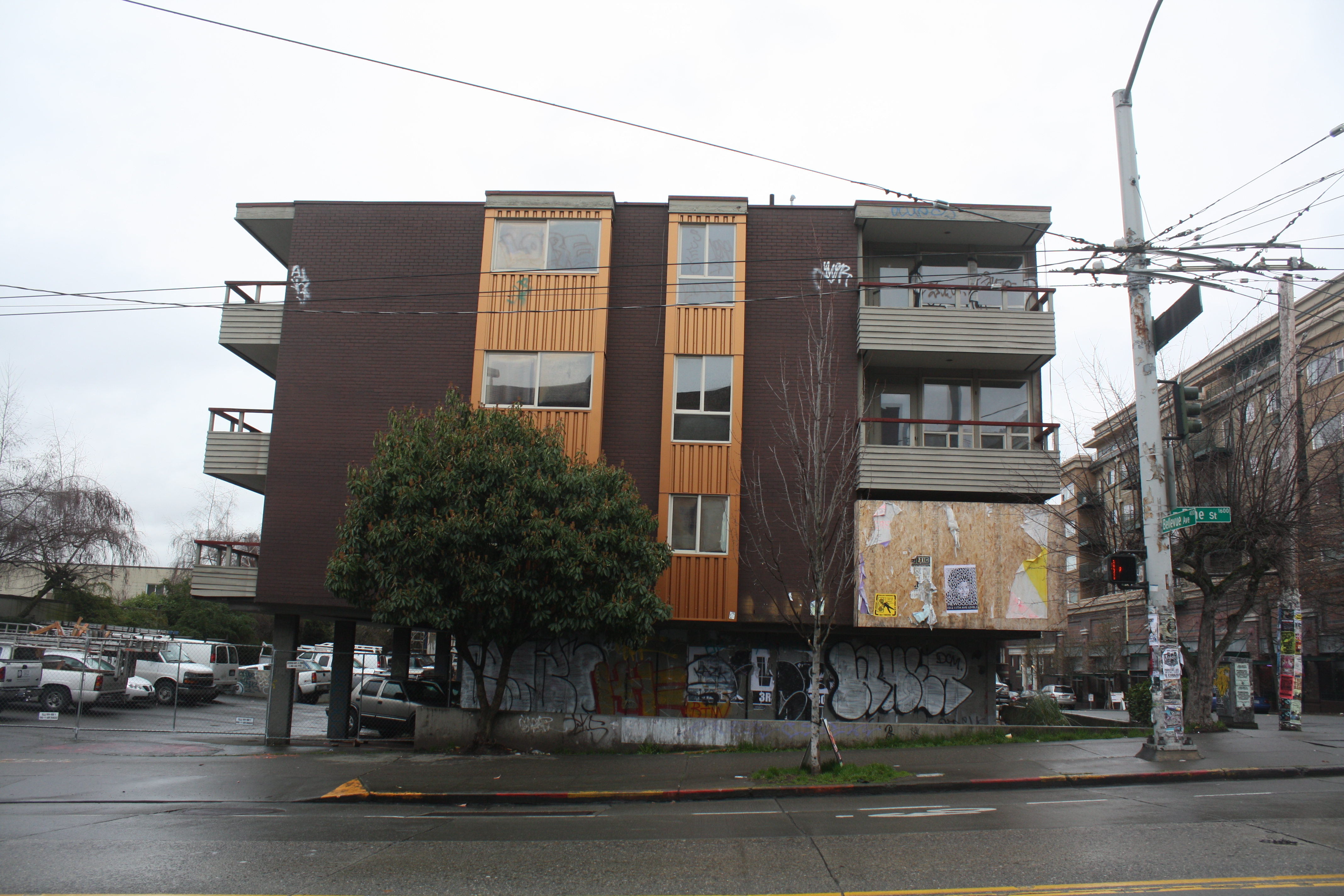 A magnet for taggers, junkies and squatters, Capitol Hill’s “charred, tagged and empty” Marion Apartments are finally coming down. According to workers at the site, demolition should begin at the 1960s era apartment building in coming days as a project to create a new mixed-use development again lurches forward a the corner of E Pine and Bellevue.

It’s been nearly one year since CHS reported that plans for the six-story, 118-unit mixed-use building with about 13,000 square feet of ground floor retail were being revived. But the path to getting work started at the decaying apartment complex was slow and winding. Finally, earlier this month developer George Webb of The Stratford Company confirmed that he expected ground to be broken on the project “in the next few weeks.” 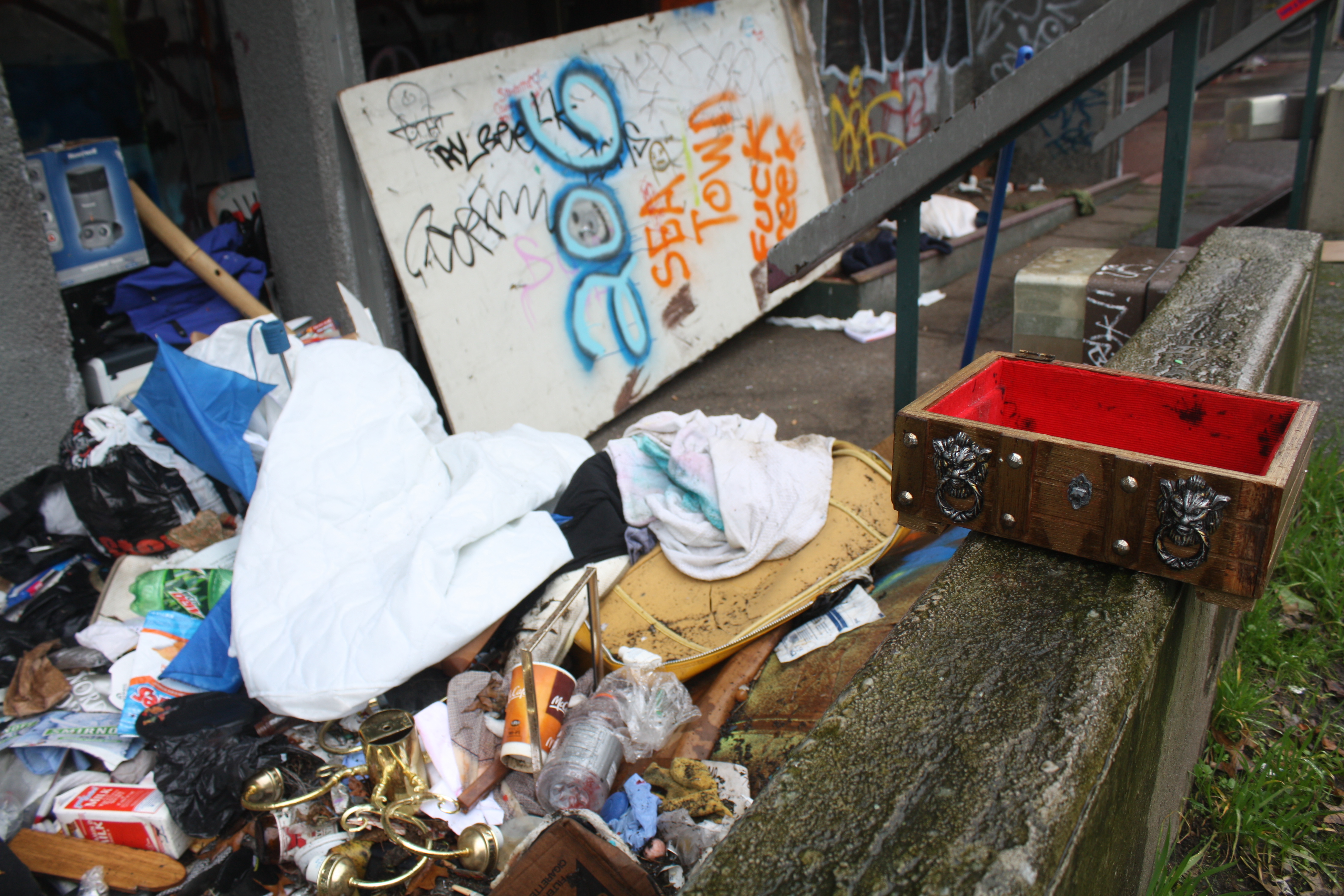 By the way, thanks to reader Brian C. for connecting with Webb and sharing an update with us.

“Please share with your readers that we remain more enthusiastic than anyone to move the project forward to completion!” Webb wrote.

Maybe not more enthusiastic than the City of Seattle, however, as it has been fielding increasing complaints about graffiti and concerns about squatting at the site. According to a person familiar with the project, police were called out to the apartments last week to give the building a final sweep and clear the building of any unauthorized residents before the coming demolition. You can see some of the accumulated detritus and left-behind possessions piled outside the abandoned building in the photo on this post.

We talked to Webb in July, 2010 about delays in the project that were holding up the plans originally approved years earlier. 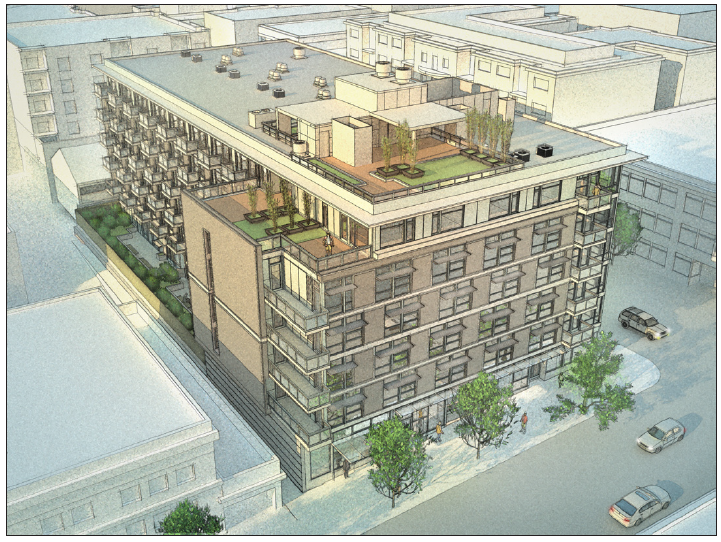 The future. More about the project here

“Like a lot of people, we’re working as hard as we can to attract financing for the project. But, we’ve fallen victim to the credit crunch,” Webb said at the time.

In October 2008, a fire ripped through part of the building as its final tenants were being turned out as the building was prepared for what was thought to be imminent demolition. Investigators later determined that the fire was intentionally set by 89-year-old Ed Jackson who had served as the apartment manager. Jackson died in the blaze.

In the years since, the building has sat empty and cycled through various waves of tagging and graffiti work, some interesting, most not. The empty space beneath the structure was, for a time, put to use for a weekly guerilla flea market. These days, construction crews for the neighboring — and about to be completed — Bellevue Terrace project use the area to park their trucks and prepare construction equipment.

Bellevue Terrace is beginning the marketing phase of its lifespan soon. The 320 E Pine development that will wipe away the Marion building is just getting started.

I’m so glad that building is being put out of its misery. It’s been a blight on the neighborhood for too long.

When this building and the one next to it open up, I suspect demand is going to be very strong. It’s such an ideal spot to be located, so close to the transit center, downtown, and all the pike/pine amenities. Sure, there’s a large apartment complex right across the street, but it isn’t pleasant looking and seems, at least from walking past, to be very car-focused.

Crossing my fingers this building is open when my next lease is up.

While I’m glad something is finally be done about this building, I think it’s a shame it was allowed to deteriorate to this point,. The Marion had nice big apartments, with REAL balconies (none of this “Juliet” garbage) for a reasonable price. The new building, unless it’s condos or designed for people who make six figures, will probably have charmless units that are at least a third smaller than what the Marion had.

Not all change is progress.

Maybe I won’t have to walk on the other side of the street to avoid the overwhelming smell of urine anymore.

Look at all that wasted roof space! Shame on the “Bellevue Terrace”

I was thinking the same thing. Such a tiny little deck in that one little corner.

To be clear, the Bellevue Terrace project is next to the Pine/Bellevue site. We wrote about it here:
http://www.capitolhillseattle.com/2011/04/07/with-change-at-

This is such good news. This eyesore has been allowed to fester for far too long. I have avoided this space for years; once I had no choice but to wait for the bus along Pine St. at a stop right in front of it. Bring on the new development. Goodbye, Marion apartments, and may the wrecking ball hit you in the *ss on the way out.

I must marry my beloved building right away to save this treasure from the wreaking ball, He has been so brave in spite of the pending demise. Oh why must things change, cant crap just stay crap?

I am so glad to see the Marion Apartments go. Especially since the new building looks like a place I’d actually want to live in…

I’ve always referred to that place as Seattle’s little slice of Silent Hill.

Ha! I would always tell people visiting that if Capitol Hill were to ever have a Resident Evil style outbreak it would originate from that building. So glad to see it go.

I lived in the “Marion” for six of the best years of my life. Great landlord (Ed) and really good neighbors. And before the fire it was pretty well kept. It never became scary until after the fact. It had really great spaces and charm that will surely never be matched. I place in my heart will be gone when the “Marion” comes down.

It’s about effing time this place got torn down so sick of the eyesore ruining my block!

Ok, hybridtoast, how can a building be car-focused? Does the building sit there and keep a journal as to what drove by? Does it giggle with excitement at the sound of an Italian v12 roaring down pine? Does it paw through car and driver and watch Top Gear? Wtf does car-focused even mean and what bearing does it have on the article?