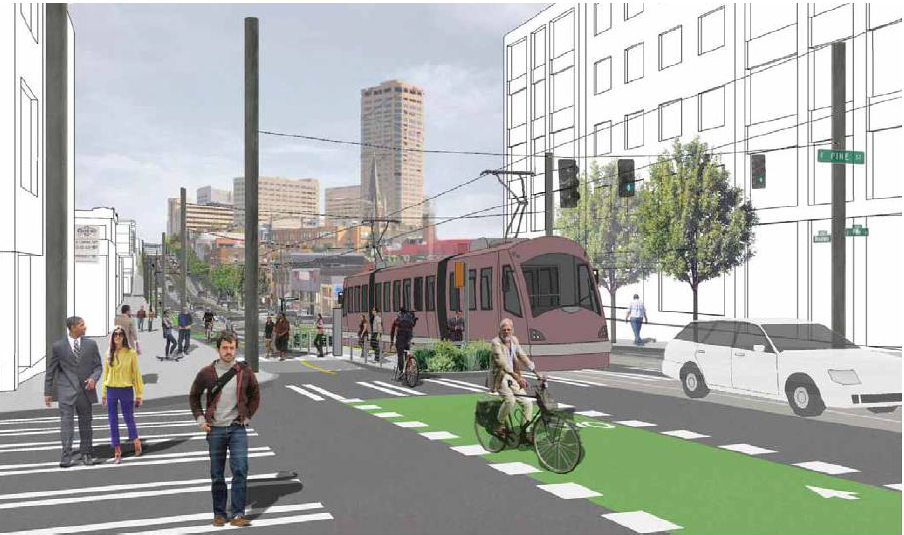 Looking south from Broadway and Pine on a sunny day in early 2014 (Image: SDOT)

In two weeks, the Seattle City Council is set to clear the final legislative clutch on the project that will create a streetcar line running between Pioneer Square and Capitol Hill via First Hill. The move paves the way for a slightly-later-than-planned April start of construction that will put the route on pace for an early 2014 start of service.

According to staff, the City Council’s transportation committee is scheduled to take up the final affirmation of the agreement between Sound Transit and Seattle to pay for the streetcar route as a make-good on the decision to not add a First Hill station to the U-Link light rail line that is expected to be completed in late 2016.

In a December briefing, Seattle Department of Transportation officials laid out the final plans for the project and outlined a decision to budget funds for a Pioneer Square extension leaving an effort to extend the Broadway portion of the route off the table:

We reported this summer on a community effort to lobby for a north Broadway extension of the route now planned to terminate at Broadway and Denny.

The full SDOT presentation from the December Council briefing, including notes on the planned frequency of cars on the line, is below. We reported on the design of the project and some of the changes it will bring to Capitol Hill streets here. 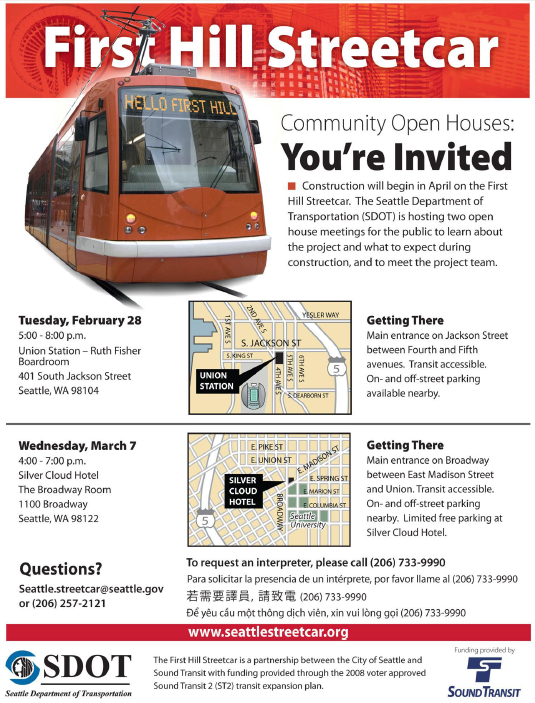 SDOT planners will be on hand at Union Station the night of the City Council committee meeting for the first of two community open houses to discuss the project. As you can see, planners are sticking with the First Hill streetcar brand. A second session is planned for March at the Silver Cloud at Broadway and Madison.

Capitol Hill should know that advocating for an Aloha extension continues. We’re working with the Seattle Streetcar Network (including major players like the Pike Place Market, Swedish Hospitals and other institutions) to advance the line to North Capitol Hill. We’ve been meeting w/ City Council, King County Council and other afgencies to keep this extension in play and have no plans of kletting up on the pressure. Aloha!

Thank you Michael and the Capitol Hill Chamber of Commerce! I find it bogus that the maps on this slide show, as well as the flyer that arrived in my mail yesterday, continue to show the North Broadway extension, but no one in city government, or at Sound Transit, has been willing to advocate for this important piece of the puzzle. I continue to believe that stopping the streetcar at the busiest intersection of Broadway, while leaving the North end of the business district unserved, is not only short-sighted, but just plan stupid. Please keep up the pressure!

This should do wonders for that block of Broadway between Pike and Pine with all the streetscape improvements. Hopefully something exciting fills that Blockbuster site.

As if the SLUT failure wasn’t enough, the city want to continue to fund more failures in the city. Trolleys are about the stupidest way to move people yet devised.

Sorry, that is false. Cars waste 90% of their energy, burn dinosaur bones, and murder people left and right. Automobiles are the problem, asshat, not streetcars.

I have worked with the Capitol Hil Community Council, the streetcar project for the past several years. The CHCC proposed the all Broadway route, won that decision, and has strongly advocated for the extension inclusion from the beginning.

It makes perfect sense to do it ow. But there is no money, and it will not happen until funding is possible. In my opinion SDOT made some internal decision to spend more at the south end, all but killing the extension on this round of construction.

In terms of user stats, and effective routing, the lack of immediate extension funding and construction is a major flaw and failure.

We can continue to advocate, all of us, thanks Chamber, but it will never happen without dedicated funding and stronger priority from SDOT and the mayor and the council.

I am glad to see this line to go into operation so soon, but really disapointed that the much better Volunteer park access will not happen, museum, Conservatory, family space, all it offers- and the N. Broadway businesses get nothing. Too bad.

Thank you, Michael, for all your efforts on this issue, and I hope that eventually this extension will happen. By the way, this is a great example of how important the Capitol Hill Chamber is to our neighborhood.

The South Lake Union streetcar is NOT a failure. Yes, ridership was low in the beginning, but has picked up considerably, and will be even greater as the development in that area continues.

I expect the First Hill streetcar to be just as successful.

Oh sweet, this means the $125 million streetcar will be useful for about TWO years before it’s largely obviated by University Link and restructured trolleybus service.

We could have electric trolly buses basically TOMORROW, but instead we are going to have to wait for tracks to be laid for an inflexible streetcar? A streetcar that will probably slow traffic, including the traffic of existing bus and trolly bus lines? Create cyclist hazards (tracks).

I’m not sure what sense there is in extending the line all the way north to aloha. North broadway commercial strip is already served by the 49, 9 and 60 buses. And honestly, why aloha, and not just roy?

What this town needs is more SMALLER buses running more frequently, not an additional mode of public transit that runs as infrequently as existing bus and trolly lines.

Oh come on, Sheikyer, have you ridden the South Lake Union Streetcar lately? While I wish that the line would be extended to the UDistrict in order to serve the Eastlake community and connect the line from downton to the university, the current route is absolutely PACKED at rush hour. I, too, thought this route was a waste, but now that the offices are filling up, I’m impressed at how it has caught on. You can’t see this line as a failure anymore (perhaps a few years ago, yes), but the potential is huge if we actually do build the downtown connector line and extend this one out to the UDistrict. Try riding the streetcar around 5:15pm on a weekday and tell us then that it’s a failure. As for being a “stupid” way to move people, try telling that to the cities around the world with full streetcar and metro systems. The biggest tragedy is that our own systems were ripped out years ago after being bought out by…guess who?…the automobile, tire and oil companies!

This line will not be obsolete if you live on First Hill or in the ID. While I disagree with the original decision to axe the First Hill station of the light rail, you can’t deny that giving people in these other neighborhoods a means of easily accessing the light rail is a net positive gain for transit. Besides, if you want to access the hospitals, eat in Little Saigon, or even get to class at SU, why would you ride the light rail downtown or to the ID when you can jump on the streetcar? Good transit is all about options.

Wouldn’t it be wonderful if this could be the streetcar named “Desire”!!