Are you part of a Capitol Hill restaurant or bar and just a little bit miffed that CHS *never* mentions you in the food notes? Send us mail or make sure to let us know what you’re up to via Facebook or Twitter.

we had been the location of the “Little Uncle” Thai pop up on mondays here from about august ’11 to december ’11.  Chefs Wiley and PK have since opened little uncle on madison and 15th, and since it proved to be such a nice experience, the change of cuisine, flavor, smell, and general ambiance of the restaurant, we decided to keep the concept, but tweak it to our liking.

since we do cook what we like to eat, that category being fairly all-encompassing, we thought we would give ourselves the freedom to play around a little bit, and turn it into a fun learning experience for ourselves, as well as bringing something a little fresh to our customers.

we decided to do a more or less bi-monthly world tour, so to speak.  every two months we are choosing a country/region and featuring a menu every monday of typical, classic home cooking from that particular place (with some possible theme nights thrown in the mix, such as the “Big Night” dinner party, recreating the sumptuous feast that the movie was all about).  this keeps fresh ideas in our heads, little influences from around the world, and some equally fresh, interesting and delicious food on peoples plates.

we started with indian food back in mid January, and will be cooking indian through march, so about another 4 mondays and we will wrap that up… and perhaps revisit particular regions in the future, as it has been a ton of fun, and not enough time to explore indian cuisine thoroughly enough.  we have been making all kinds of indian snacks;  peanut chaat, dal soup, samosas, papadams, parathas, naan, dosas, housemade pickles and chutneys, shrimp pakoras, chickpea chole, and plenty of other things like butter chicken, lamb and beef meatballs a la rogan josh, pork vindaloo, fish curries, clams etc…  and like i said, the fun will continue for another 4 weeks.

then we are going to take a little metaphorical trip over to eastern europe and see what people like to chow down on in places like the balkans (i’m a half yugo myself), poland, hungary, czech, russia, bulgaria, armenia etc etc…  it will still be cold enough around here for a couple months for people to get their pirogi on!  we will be featuring typical regional dishes of those countries, also homestyle, and also very delicious!  i make a pretty mean GOULASH!

Dimitrijevic says the crew at La Bete is also thinking about doing cooking courses in conjunction with its world tour.

It’s hard to believe that five years ago The BottleNeck Lounge flung open its front door on Madison and waited breathlessly for someone to come in.  And come in you did!  Through Buttrock Suite dance parties and Hot Dog Blessings, Olympic Hockey games and  Women’s World Cup Soccer, during the Great (oh so great) Palin political debates, and five Kentucky Derby events – you have been there.  You have danced on the bar top (please refrain), lined up for Skillet, brought your Canadian flags, and tied your pups up front.  We salute you!

On Friday the 9th we’ll be celebrating our lucky longevity and we hope that everyone who has ever crossed our threshold will return that night to raise a frothy pint and share our glee.  We’ll be bringing back the Top Five Hair of The Dog Drinks from throughout history and the owners of the famous pooches will be on hand to receive a special prize.  We’ve also got guest appearances lined up from the special Seattle folks who have contributed to our success.  Too many drink specials to mention here – just show up, bring a friend, your ongoing sense of humor, and your love for the ‘hood!  Special guest appearances by a myriad of fantastic Seattle folks.

We posted about the Bottleneck’s grand opening way back when we were small.

– Enthusiasm to participate in guest interaction at our open kitchen dining counter. 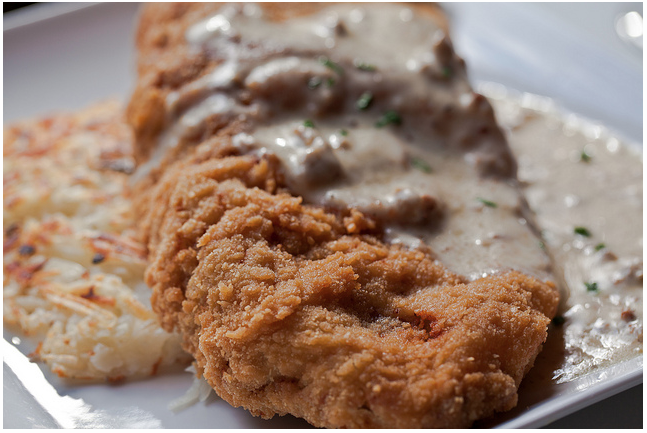 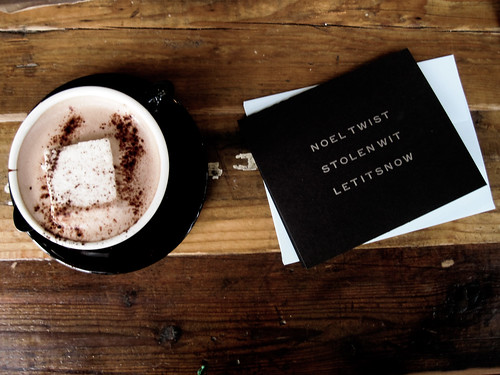 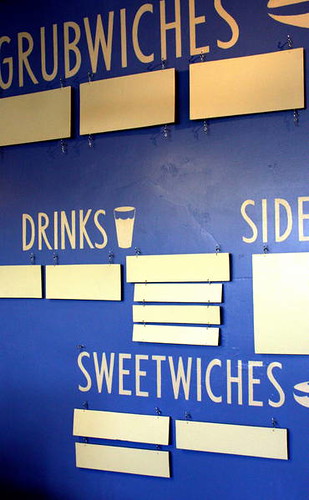 YOU WERE SO DELICIOUS. You left us too soon. You will be sorely missed. Brian Kun had better move that portabello brie sandwich somewhere else.

Gosh darn it! I’d been wanting to check out Grubwich and never got around to it. Shame on me!

Really surprised they are using a pre-made chicken fried steak.

Where the heck is that served?? I want it!

I tried several times to eat at Grubwich. They were supposed to be open for lunch, but every time I tried them, they were closed. Once I actually found it open, went inside, but there was no one there. I called out “hello” several times and waited for about five minutes, then left and went to the Other Coast Cafe.

manhattan drugs. on their brunch menu. i thought it was just so-so. maybe you’ll have better luck.