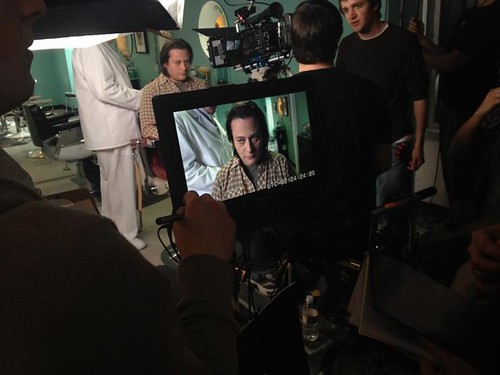 Our community college can’t keep its film program open but Capitol Hill remains a popular area to make movies in Seattle — even with the state’s newly passed film incentive law not yet kicked in. We’ve received quite a few notes about a shoot underway at Denny and Bellevue inside Acme Barbershop Tuesday morning — thanks to @Erin_Boudreau for providing the final clues to the mystery. Here are some of the details on the indie “dark comedy” Matt’s Chance from Seattle filmmaker Nicholas Gyeney:

Matt, a dark and brooding late 20s cowboy, has just witnessed the ultimate betrayal. After walking in on his girlfriend sleeping with another man, and learning that she pawned her engagement ring to pay for the abortion of their unborn son, Matt begins spiraling downward into a quest for revenge that pits him face to face with the mafia, corrupt bankers, a trash talking priest, and even God himself.

Acme says the shoot is scheduled to continue through Wednesday and they’ll re-open for business on Thursday.

Other recent Capitol Hill shoots are starting to hit the screen. Hill-filmed indie Fat Kid Rules the World debuted at South by Southwest while 21 and Over — which turned part of the Hill into Greek Row in September — is in post-production.

Film is obviously still alive in Seattle since people are making big budget films even before the newly approved film incentive kicked in. If you care about preventing the closure of the Seattle Central Film & Video program, which is one of the best film programs in the Pacific Northwest, and is located right in the heart of Capitol Hill, you can do three things:
1) ‘Like’ the Facebook page at http://www.facebook.com/SaveSCCCFilm
2) Sign the petition: http://bit.ly/savescccfilm
3) Email SCCC president Paul Killpatrick and let him know you disagree with his decision to close the program.
Thank you!

He’s probably another Hollywood person we shouldn’t promote to kids as a role model but I saw him a couple of years ago on an episode of ‘TMZ’ where the paparazzi caught him *in the wild in* on a SoCal beach and he must have been close to 60 years old. What’s crazy is this guy old enough to have grandchildren in high school was hitting on three, hot, approximately 18 year old ladies who were absolutely into him although they probably had no clue that he was a semi-famous movie star.