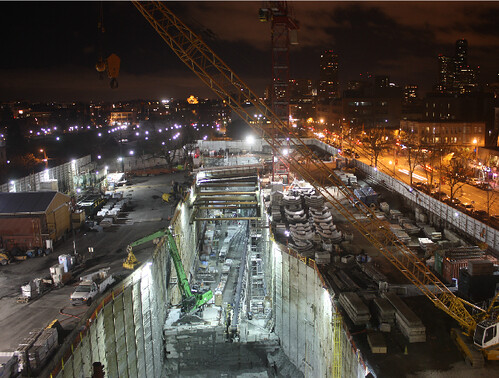 A massive, 21-foot tunnel boring machine’s journey from Husky Stadium, under the Montlake Cut and up Capitol Hill is about to end on Broadway. Sound Transit said last week that crews expect Togo, the first of two machines that left the University of Washington on the 2-mile journey last spring, to arrive and “hole through” at the Broadway station site in the next two weeks. Its counterpart Balto is about a month of tunneling behind it, Sound Transit says.

The journey for the first machine will have taken about 10 months after it was launched in mid-May following a ceremony at Husky Stadium. Given the two-mile distance, that works out to a rate of about 35 feet of tunnel per day. The agency said that Balto made up some ground in recent work turning in a “record” 100-foot day.

At work on a “cross-passage” (Image: Sound Transit)

The tunneling part of the project has been both engineering marvel and, for some at the surface, annoying nuisance. In its most recent project update, Sound Transit acknowledged the continued possibility of vibrations as the tunneling operations move toward completion:

As the TBMs make their final push to the station at Broadway and John, It is possible that construction vibration may be noticeable above the alignment. If you have concerns about the tunnel construction or questions about noise, please contact Sound Transit’s 24-hour construction hotline at 1-888-298-2395.

The agency has said that it does not believe the vibration issues will be a problem when operations of the light rail line connecting downtown to Montlake is operational starting in 2016.

Meanwhile, the silent star in all of this — or the beneficiary of a better urban environment for tunnel digging — has been the tunnel boring machine dubbed Brenda. She’s back on the move from Broadway to the Paramount Theater where she completed the first of the two tunnel components she is responsible for in December. Brenda’s stretch is only 7/10ths of a mile but passes below thousands of people and the vital I-5 transit corridor. 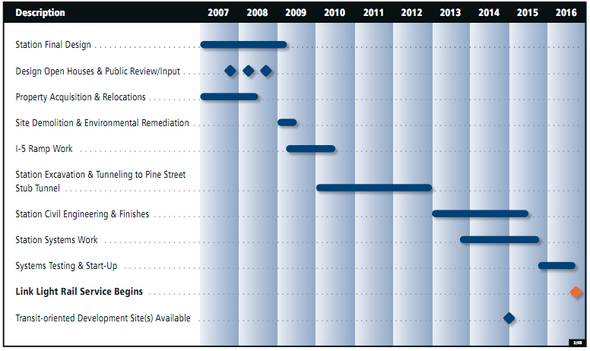 The final arrival of the two machines from Montlake next month won’t end the tunneling work, Sound Transit reminds anybody looking at the total project and calculating that the work is ahead of schedule. “[W]ork continues for several months after the machines arrive at their destinations, because of the need to build “cross-passages” that connect the southbound tunnel to the northbound tunnel, and install concrete floors, emergency walkways, and utility conduits,” the agency said.

I would love to see some enlightening pictures of the work being done on the tunnel and there doesn’t seem to be any published anywhere. I can go on YouTube and find lots of detailed updates on the new subways being built all over the world including New York City.

But Sound Transit doesn’t seem interested in keeping the public informed, all there is are two web cameras at UW and Capital Hill and neither really shows anything.

Compare that to the 6 web cameras that are watching the new Husky Stadium being built?

Here is a link to the Seattle Post Intelligencer’s superb photo gallery on the Transit Tunnel by Photojournalist Joshua Trujillo.

Is there anywhere we can go to see this view (Broadway webcam, from high above) live?

Go up to the top of the page, pick Maps & Tools > Light Rail Construction Cams. It will take you here: http://www.capitolhillseattle.com/lightrail