This year, Aaina (pronounced EYE-nah, Urdu for “mirror” ) features two performances of the play Yoni Ki Baat, a controversial South Asian take on the Vagina Monologues. In past years, only Indian women have performed. For the first time, this year’s show will also feature women from Afghanistan, Pakistan, and Nepal. Like the original, performers recite monologues reflecting their personal experiences with sex, abuse, pleasure, coming out, and the female anatomy.

The 7th annual Aaina will be held April 20-22 at the Seattle Asian Art Museum. In addition to the two performances of YKB ($15) directed by former participant Rituja Indapure, two Indian documentaries will be screened ($5 each). “Boxing Ladies” profiles three Muslim women boxers and “Delhi-Mumbai-Delhi” examines the life of India’s beer bar strippers. Rounding out the schedule are a handful of free events.

Another reason to check out Aaina this weekend is to support Tasveer, the Seattle non-profit behind the event. Through its film festivals and cultural events, Tasveer pushes the boundaries of women’s speech and expression within Seattle’s South Asian community — a community where significant public outrage can still boil at women tackling “taboo” subjects.

Rita Meher, who co-founded Tasveer in 2002, was the target of that scorn following the group’s first YKB performance in 2006. “People in the community were very angry, and there was a lot of backlash. People walked out, then they tried to sue us. They got lawyers.”

Instead of nixing the performance the following year, Tasveer made it ever bigger. 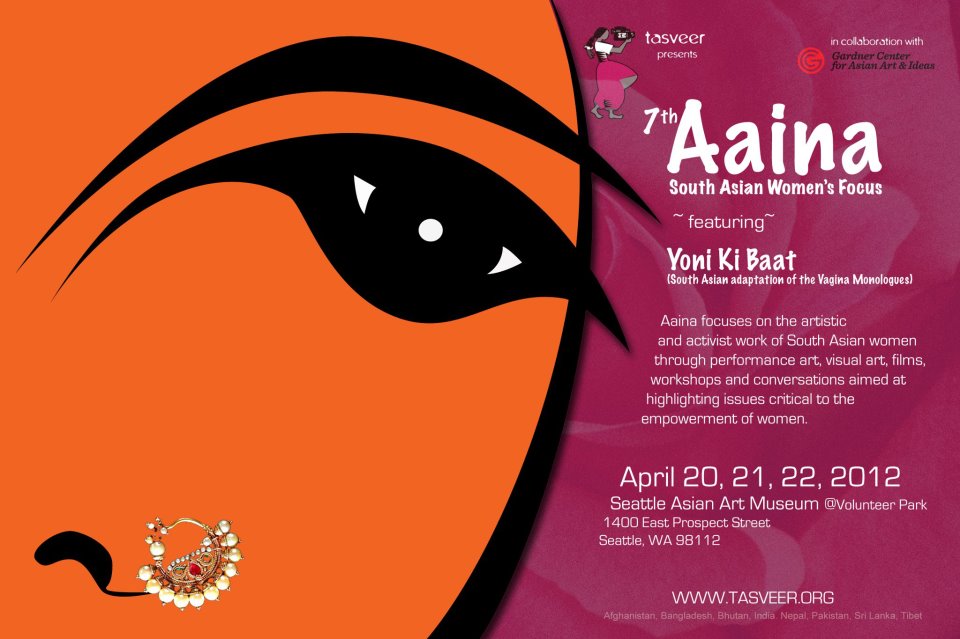 “We’ve had women performers who had friends who wouldn’t go, or who had to tell their husbands they were going somewhere else because it was too taboo,” says Meher.

YKB isn’t the only Tasveer event that’s drawn the ire of some in Seattle’s South Asian community. In 2008 the group hosted a LGBT film festival. No one came. Even the festival’s volunteers dropped out, citing the controversial nature of the films.

But Meher says the group is making progress. Despite the backlash, Aaina has consistently sold out to South Asian crowds, and Meher says even conservative Eastside families are increasingly coming around. (South Asian countries include Afghanistan, Bangladesh, Bhutan, India, Maldives, Nepal, Pakistan, and Sri Lanka).

Meher, who is organizing the event more or less by herself, says she’s motivated by the dramatic transformation many performers experience, especially those in YKB.

“We have women participants who can’t even say the word ‘vagina’ when they start, but after five months of rehearsal they say things like ‘I feel so free.’”

Meher founded the group along with Farah Noushen in 2002, following the 9/11 attacks.

“After 9/11, we thought we really had to start this organization because there was no information about South Asia, no one representing the South Asian community.” Pakistan, India, and Bangladesh rank second, third, and fourth respectively in the world for countries with the most Muslims. While Tasveer tackles religious issues, the group itself is secular.

Throughout the rest of the year, Tasveer focuses on showing South Asian films that go beyond the predictable Bollywood romance. Tasveer has screened more than 200 films in Seattle.